New Delhi, July 19: Indian defence scientists have taken up a new cruise missile development programme. The missile named Nirbhay (The Fearless) is in the same class as the US’s Tomahawk and will have a range that is 300km longer than Pakistan’s Babur.

Nirbhay is India’s seventh missile development project after the Agni series, the Prithvi series, Brahmos (in a joint venture with Russia), Akash, Trishul and Nag. The last three were part of the Integrated Guided Missile Development Programme founded by A.P.J. Abdul Kalam. Nirbhay is being developed alongside Astra, an air-to-air missile designed to hit targets beyond visual range.

A cruise missile can be guided to a target. A ballistic missile is fired at a pre-determined target. Nirbhay will carry onboard a terrain-identification system that will map its course and relay the information to its guidance and propulsion systems.

“Every modern military needs to have missile options. The requirement for Nirbhay was projected by all three armed forces to fill a gap in our missile programme,” Avinash Chander, the director of the Advanced Systems Laboratory, Hyderabad, who is in charge of the project, told The Telegraph in Delhi today. Nirbhay will be a terrain-hugging missile capable of avoiding detection by ground-based radar. It would have a range of 1,000km.

In the schedule drawn up for Nirbhay, a technology demonstrator is slotted for early 2009. Chander said the design for the system is complete and “hardware preparations are on”. He said Nirbhay would weigh around 1,000kg and travel at 0.7 mach (nearly 840kmph) and would be capable of delivering 24 different types of warheads. The Pakistani subsonic cruise missile Babur (also called Hatf VII) has ranges of 500 to 700km. The US’s Tomahawk has many versions, the latest of which has ranges in excess of 1,500km. 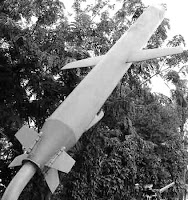 Nirbhay missile being test fired.
A

The news article seems to be from 2008,as it says t demonstrater in 'early 2009'.....anyways thnx for the article,any latest updates and news on the date of next test?

They are not Nirbhay but American cruise missiles.

The first image was used in a presentation by DRDO, but it is an American model of a cruise missile probably earlier Tomahawk.

I think this is fake. Nirbhay is supposed to be tested in 2009 and there was no official news that it has been tested so far.

daredevil said:
I think this is fake. Nirbhay is supposed to be tested in 2009 and there was no official news that it has been tested so far.
Click to expand...

I got the image from wikipedia

Dark Sorrow said:
I got the image from wikipedia
Click to expand...

Wikipedia as a information source is not always authentic. Always look at references they quote for any piece of info or pic to ascertain authenticity.

Dark Sorrow said:
I got the image from wikipedia
Click to expand...

Not to believe in all of Wikipedia, I have removed the picture there.


India is developing a sub-sonic 1,000-km range cruise missile ''Nirbhay'' which can be used for a ''variety of applications'', a top military scientist said here on Sunday.


The 1000-kg "missile is getting into some shape", Dr V K Saraswat, Scientific Advisor to Defence Minister and Chief of Defence Research and Development Organisation said.

He also said the flight-trial of air-to-air missile 'Astra', having a range of 45 to 100 km, is on the cards. Saraswat was delivering the keynote address at a national convention on 'The Frontiers of Aeronautical Technologies', organised by the Aeronautical Society of India here.

He said India's armed forces are looking for long duration loitering missiles which can enter "enemy territory", search targets such as radars, concentration of assets and "a variety of movements of enemy", "home-on" the targets and "bang" them.

"We need to develop (loitering missiles)", he said. Saraswat made a strong push for deploying space-based sensors to keep tab on "adversaries" and gather intelligence via-a-vis defence surveillance.

He said space-based sensors are a must for tracking and detection of movements of enemies. Unless it have space-based sensors, India would not be able to make its ballistic missile defence system a "potent weapon", the scientist said. India is launching a major programme for surveillance, particularly space-based, in terms of electro-optical payload and synthetic aperture radar. "So, unless we prepare ourselves for future space-based systems, security is going to be a major issue," he said.

On anti-satellite (ASAT) system, Saraswat said ballistic missile defence has some elements required for ASAT. India has the capability in this area in terms of "kill vehicle", boosters and radars. But he noted that "some more building blocks are required to be developed".

However, India has no plans to demonstrate its capability in terms of killing a satellite in orbit -- unlike China which undertook such a mission in 2007 --, saying "we don't believe in that (ASAT programme)".
Last edited: Apr 11, 2010

I think that image is not fake. it is not being test fired . That missile model is a static model for display in front of a DRDO lab , should be ASL .

here is a artistic view

Sridhar said:
I think that image is not fake. it is not being test fired . That missile model is a static model for display in front of a DRDO lab , should be ASL .

here is a artistic view

Otherwise we would had a test by now.

I am expecting a more shoruya or Brhamos esque design.

The missiles most interesting feature is its ability to loiter over the target before engaging. So it will most likely have some form of wings.

But i though the Nirbay would be made compatible Brhamos launch tubes at least for the navy.

So that protruding rocket motor is out of the question

As Nirbhay's range is 1000km I don't think it will be powered by a Saturn turbofan as that would be a violation of MTCR, of which Russia is a signatory. Same reason why range of Brahmos is caped at 290km.
I feel Nirbhay is the kind of missile our forces need most urgently. In case of a conflict with either of our neighbours I doubt if our nuclear missiles (or their's)will see any action as no one would wan't a nuclear war. So Babur and the Chinese cruise missiles (which have a much longer range than brahmos) would give them the ability to attack us from a safe distance while our forces would have no such an option.

Nirbhay will most likely be a turbofan engine this way it can be produced cheaply in large numbers,one of the pictures above is Nirbhay UAV a hybrid UAV and cruise missile. The issue of MCTR will probably not be a factor if everything is done indigenously like Shauriya.

Nirbhay is urgently require to counter china, we need this system in thousands. plus we need all type of versions, air launch, sub launch, ship launch, truck launch and silo launch type.

It is high time that our services pump in money for this project.

If i am military head of any of the three services i want to have the capability to hit target at 100o km with cheap weapon and that too in great number.

Our future deterrence a part from nukes, BMD and SU30 MKI are these cheap missiles.

India’s foray into developing a sub-sonic cruise missile is heading in the right direction. Christened Nirbhay – this stealth beast -- claims to have a range of 1,000 kms. Delivering the key-note address the concluding day of Aeronautical Society of India’s national convention on ‘The frontiers of aeronautical technologies’ in Bangalore, Defense Research and Development Organization (DRDO) chief and Scientific Advisor to Raksha Mantri Dr V.K. Saraswat, said that the missile could deliver a maximum of 24 types of warheads, if the mission demands so.
Sources confirmed to tarmak007 that Nirbhay, built with ‘a certain percentage of Israeli collaboration’ is fast advancing at Hyderabad-based Advanced Systems Laboratory (ASL). “Once operational, Nirbhay (fearless) will arm three Services as it can be launched from multiple platforms on land. You will get to see it from close quarters during the 2011 Aero India,” sources added.
It is learnt that the propulsion system design is through and the integration work has already begun for Nirbhay, which will be a technology demonstrator. The missile is said to be far better than Pakistan’s Babur.
The latest in the series of India's missile development programme, Nirbhay has its predecessors in the Agni (I, II & III), the Prithvi (I & II) and the supersonic Brahmos.
“The sub-sonic Nirbhay weighs 1,000 kg with a 1,000 km range and a speed of 0.7 mach. It is six metres in length with a 520 mm diameter and would use gyros for inertial navigation system,” the sources added, refusing to divulge much on the engine and the scheduled first flight.
Nirbhay can draw parallel to the long-range American Tomahawk missiles – in the limelight during the 1991 Gulf war.


I was not aware Israelis were involved in this project??

LF israeli involved in this project long back and i suppose they will be getting their version of the Nirbhay. Nirbhay will be heavier than Brahmos IMO opnion as the payload and the range will be more also it may fins for maneuvering as its speed will be less than mach 1

Army is looking for the loitering missiles , and I've heard that IAI Harop be the contender , now can Nirbhay be capable of the same role? Please shade some light.

Pintu said:
Army is looking for the loitering missiles , and I've heard that IAI Harop be the contender , now can Nirbhay be capable of the same role? Please shade some light.

CM can never be a LM. LM will be much lighter and smaller range than a CM. Even i want to put finger in my lips till whats happening there in Nirbhay. May be it will come out as a Loitering CM, who knows?

Thanks , yes agree , and I also think since DRDO termed its use in 'Multiple Roles' , its better to wait for the future.

Nirbhay need not necessarily be heavier than brahmos. Compare the tomahawk & brahmos. I think the main reason why Brahmost is so heavy is because of its requirement for flying close to 3 mach, since Nirbhay will fly much slower it could actually be even lighter than brahmos. I don't mind the weight though(if it is heavier), as long as it can fit in the same launcher as brahmos.
You must log in or register to reply here.
Similar threads
India developing air-launched version of Nirbhay cruise missile
Problem in Nirbhay cruise missile identified: Antony
is Nirbhay Cruise missile better than Babur
Nirbhay Cruise Missile Pictures
Share:
Facebook Twitter Reddit WhatsApp Link