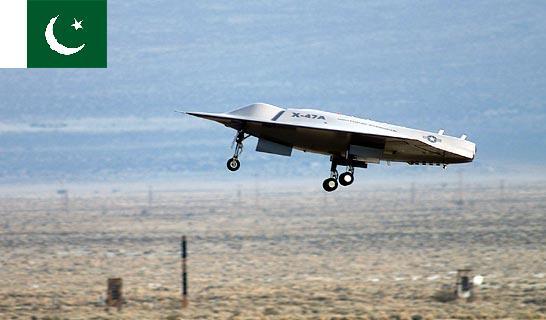 A Kuala Lumpur-based institute Grande Strategy (no kidding), which describes itself as a "Muslim think-tank providing strategy and analysis from an Islamic perspective" has published an online "strategy paper" today (by a defence analyst called Meinhaj Hussein) suggests UCAVs as a "possible solution in countering India's military aviation threat to Pakistan." The paper recommends that the PAF develop this proposed UCAV in the same way that it developed the JF-17. It even quotes from the Koran to pitch UCAVs as the assymetric answer to India's fifth generation push.

After a rather droning (no pun intended) primer on the advantages/disadvantages of UCAVs, the paper goes on to recommend that UCAVs in Pakistani service are the only platforms that will be able to counter the "larger number of fifth generation fighters" India will have by 2025.

India will begin to field PAKFA fighter jets from Russia and may also develop her own from technology bought from the Russians. While the latter may be discounted as another employment opportunity for DRDO and related third-rate Indian bureaucracies, PAKFA and any specific design built for India by the Russians will provide a challenge that would be wholly new to the subcontinent: a 5th generation fighter. Further, it may not be farfetched to imagine a JSF purchase for the IAF, given the blossoming long-term partnership developing between India and the United States. While the credentials for the JSF are still unclear and the jury may be out on its air-to-air combat capabilities, the PAKFA is a clear threat. The PAKFA was designed to counter the F-22 in air combat. The threat is perhaps best defined as reasonable stealth, super cruise, high altitude and high speed. The PAKFA takes BVR combat to a new level that the airframe of the JF-17, by design, cannot compete with. BVR missiles launched from a high-high profile aids missile range and speed, and reduces the threat, range and effectiveness of Pakistani BVR launches in response. With AWACs and refuelers in the sky, such threats would be a menace, particularly with longer ranged BVR missiles from Russia. By 2025, India could field PAKFAs and perhaps even JSFs in the hundreds, drastically changing the military balance in the Subcontinent. Pakistan can either go bankrupt attempting to counter this new threat or she can become obsolete, back to a decade similar to the 1990s. Or Pakistan can develop UCAVs.

#
The general approach has been to counter India's provocative procurements on a largely symmetric basis. Increasing number of manned fighter jets have been reciprocated by increases in Pakistan's inventory of manned jets. Purchase of AEW assets have been matched by an equivalent purchase. Nuclear tests were responded to with equivalent nuclear tests as were ballistic missile tests. However, this asymmetry is increasingly impractical because of differing size and economic development
between the two countries.Meanwhile, India is now slated to acquire a large number of 5th generation planes in a 50-50
partnership with the Russians. Instead of attempting to break the bank and procure increasingly complex (and expensive) 5th generation fighters with the added exponential increase in maintenance and other operational costs, a solution may be to respond asymmetrically. Evidence of responding with positive asymmetry can perhaps be found in the Quran: The good deed and the evil deed are not alike. Repel the evil deed with one which is better. Al Quran, 41:33

How about getting the Vimama. Se Vimana here. All dorks do is mix everything with religion.

Yes PAF will make X-47 equivalent as it has designed and developed JF-17s. Jai Ho!

On side note, I always wonder how rest of the world gets fooled by Pakistan which says "JF-17 is their's and was manufactured in China initially only because they did not had infrastructure" yet they don't reply with anything other than 'Umm' when asked "what exactly is made in Pakistan in JF-17?

lol, after reading what the think tank has to say about countering IAF.. i am like

Provide link also....this Muslim think tank is is drunk, USA is not even providing them predator, how they will give them X-47 Pegasus...
JF 17 is Chinese made and pakistan they only finance it with soft loan...
E

Guys if you want to be serious in understanding Pakistan think tanks, then follow well known think tanks that are known to influence policy decisions. Not unknown websites which seem to be put together by hyper nationalists expat Pakistanis. this should probably belong in the jokes section or be binned.

There was a controversial survey done by another FATA based Think Tank called Aryana Institute for Regional Research and Advocacy that showed the locals favouring drone strikes, but it seems to have been by pulled offline by "some one"
Last edited: Dec 27, 2010

pakistan will need at least another 100 years to develop x-47 pegasus.there is no guarantee that pakistan will exists as a nation till then.also the think tank is absolutely stupid.how can he assume that india will be contended will fgfa,amca,jsf etc,and not build ucav.as a matter of fact drdo is already working on ucav aura.as for pakistan,it will perhaps never ever be able to match indian military might even with combined assistance from china,usa.also the x-47 will a great force multiplier and ideally suited for unconventional situations like insurgent problem in afghanistan and iraq.in a conventional scenario it will be no match to pak-fa face-to-face.

rakesh said:
Pakistan can either go bankrupt attempting to counter this new threat or she can become obsolete, back to a decade similar to the 1990s. Or Pakistan can develop UCAVs.
Click to expand...

Apart from the crap Pakistan can never go bankrupt as long as pakistan keeps up its begging habit. And what about the power balance, do the Mexicans ever complain about power balance in the region.
You must log in or register to reply here.
Similar threads
"Muslim" Think Tank To PAF: Get UCAVs To Counter IAF Strength,Quotes Koran To Support
Russia: Muslim man Timur kills 8 in college attack!!!!!
Shocking: Pakis celebrate I-Day by publicly assaulting, groping, tearing down cloths of a Muslim Woman
Malaysian ex-PM Mahathir says Muslims 'have right to kill French'
Share:
Facebook Twitter Reddit WhatsApp Link