It utilizes the vertical take off and landing of a helicopter and couples it with the off road driving capabilities of a truck. And, what's even better, is that this robotic warrior is remote controlled.

Introducing Black Night Transformer, a specially made truck that comes complete with eight rotors - four on each side - that will spring out for take off and then fold in while driving.

The machine was built as part of a U.S. military desire for a 'multi-mission medical and casualty evacuation unmanned air vehicle/unmanned ground vehicle', according to Pop Science.
Click to expand...

Source : Naval Open Source INTelligence: U.S. military look into remote controlled 'helicopter truck transformers' that can be sent on rescue missions WITHOUT a driver
Last edited by a moderator: May 10, 2015

http://m.youtube.com/watch?v=krkJ6jcqBB4
The U.S. Army Tank-Automotive Research, Development and Engineering Center (TARDEC) and Lockheed Martin have demonstrated the ability of fully autonomous convoys to operate in urban environments with multiple vehicles of different models. The demonstration earlier this month at Fort Hood, Texas, was part of the Army and Marine Corps' Autonomous Mobility AppliquÃ© System (AMAS) program, and marked the completion of the program's Capabilities Advancement Demonstration (CAD).

The Q-Warriorâ„¢- the latest iteration of BAE Systems helmet- mounted display technology, looks like a pilot's head-up display but has been specially designed for the soldier who needs unique capabilities, such as identifying hostile and non-hostile forces, as well as co-ordinating small unit actions. A revolutionary helmet mounted display system designed to provide soldiers and Special Forces personnel with more real- time visual data than ever before is exceeding expectations in field testing with US military researchers.

[highlight]Designed by the world leader in helmet-mounted displays, Q-Warrior provides pioneering situational awareness information for ground troops.[/highlight] Designed and built by engineers at our Electronic Systems business in Rochester, Kent, the system significantly increases situational awareness capabilities for the 'dismounted soldier' - in other words military personnel operating out of their vehicles. Q- Warriorâ„¢ introduces a high transmission and high luminance see-through display which incorporates a high-resolution colour, collimated display to allow the use of symbols and video to blend intuitively with the user's view of the world. Waypoints, other points of interest and targets can all be displayed overlaid on the real view of what's actually out there.

As the military relies more and more on unmanned aerial vehicles to carry out pinpoint strikes, the services need smaller munitions to arm them. And that's where Spike comes in. Weighing 5 pounds, this mini- missile developed by the Navy is many, many times lighter than the 100-pound Hellfires typically carried by UAVs — but still packs a precision punch. Scott O'Neil, who is overseeing its development, calls Spike "the world's smallest guided missile." "Most of our weapons are fairly large because they're taking out very big targets," O'Neil, the executive director of Naval Air Warfare Center Weapons Division, told Navy Times in a Feb. 12 phone interview. "We've started looking at, with miniaturization of electronics, what does that mean to weaponry? How small can we make weapons and keep them effective against the targets that we're talking about?" Spike is an in-house project, completely developed and funded by NAVAIR at Naval Air Weapons Station China Lake, Calif. For now, it's a cool toy to help train NAWCWD engineers on miniature munitions systems, O'Neil said, but it's up for grabs if the services are interested in fielding it. "Fleet Forces [Command] and different elements of the Navy and other services are aware, they're interested, it's just a matter of the budgets where they are," O'Neil said. "If somebody wanted to pick this up and make it a program, we stand ready to support that." The missile measures 2 Â½ inches in diameter and costs about $ 50,000 with off-the-shelf parts.

How U.S. Special Forces Fit A Bridge In A Backpack | Popular Science

The BAMBI (Break-Apart Mobile Bridging and Infiltration) device is a modular bridge that weighs 27 pounds and can be strapped to a backpack. The prototype, created by engineering students at Utah State University, has six sections composed of carbon-fiber tubes and a foam platform. Together, they create a 22-foot-long structure that can hold 350 pounds. A sandy finish provides enough traction to use it as a ramp over a 15-foot wall.
Click to expand...

U.S. military leaders have approved funding to develop a hybrid, stealth motorcycle to be driven by special operations teams in the not too distant future. The Defense Advanced Research Projects Agency has issued a grant to integrate a multiple fuel, hybrid-electric power plant into a dirt bike built by BRD Motorcycles. The hybrid electric engine will be built by Logos Technologies. DARPA leaders forsee an electric bike that can drive for an extended range while producing nearly zero engine noise. "Quieted, all-wheel-drive capability at extended range in a lightweight, rugged, single-track vehicle could support the successful operations of U.S. expeditionary and special forces in extreme terrain conditions and contested environments," said Wade Pulliam, manager of advanced concepts at Logos Technologies. "With a growing need to operate small units far from logistical support, the military may increasingly rely on adaptable, efficient technologies like this hybrid-electric motorcycle." A hybrid drive system would offer the bike more range than a purely electric system. This will be the first time a hybrid drive system is incorporated onto a motorcycle, a Logos official said.

MOSCOW, April 22 (RIA Novosti) – The new Russian mobile security robot Taifun-M, designed to provide security at strategic missile facilities, has been shown on the Russian Vesti news program. The combat robots, which have no foreign analogue, will be used to secure Yars and Topol-M missile sites and can be operated remotely by a secure wireless connection and in the future with an autonomous artificial intelligence system, the program reported Monday. A spokesman for the Defense Ministry said last month several of the robots, which feature laser- targeting and a cannon, will be deployed at five sites by the end of the year, part of an upgrade of existing automated security systems. The official said the robots will carry out reconnaissance and patrol missions, detect and destroy stationary or moving targets and provide fire support for security personnel at the guarded facilities. Mobile robotic platforms play an increasingly important role in military and security applications, helping personnel to meet challenges posed by the growing threat of terrorist attacks or armed militants engaging in guerrilla warfare, while minimizing the risk of casualties.

http://m.youtube.com/watch?v=kDay5OWDPn4
This is the official video of the Advanced Tactics Black Knight Transformer first driving and flying tests. The Black Knight Transformer is a "flying truck" that combines the best aspects of a helicopter and an automobile. It is a robust and inexpensive aircraft that can perform autonomous casualty evacuation and cargo resupply missions. 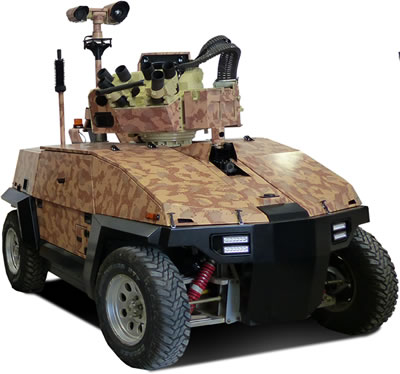