The Ukrainian "competitor" of the #Russian "Tunguska" is a mutant T-80 and #Shilka mutant.

Textile based metamaterials for radar absorption that can be used as uniforms for personnel and skirtings or coverings for ground vehicles. Transparent metamaterial absorbers have been developed for vehicular windshields or canopy of slow aircrafts.

DSG provided bullets to Special Operations Command for testing earlier this month. Odd Leonhardsen, the company’s chief science officer, said the tests will include firing up toward the surface from underwater, and some others he said he wasn’t told about.

But the company mounted its own demonstration on Wednesday morning at a shooting range outside Fayetteville, North Carolina. Using a Colt AR-15, a company employee fired a CAV-X bullet through 13 blocks of ballistic gelatin, each 1.3 feet long — the kind the FBI uses in testing. The cubes, a bit denser than water, stand in for human flesh. A normal bullet will penetrate just a couple of


The company also demonstrated different bullets that can shoot through sandbags, through 2 cm of steel (with no ricochet), and through body armor.

Only recently, said Leonhardsen, has the company entered a phase where it can mass produce the special bullets.

DSG is also selling to other governments, Leonhardsen said. He declined to identify them. He did say those governments were testing how well the bullets performed when fired from helicopters into the water. One potential target: submarines. In tests performed by DSG, the .50-cal. bullets can travel 60 meters through water or penetrate 2 cm of steel through 17 meters of water.
A

With so many posts by Kunal Biswas, I get the impression that future wars will be fought by technology and not by soldiers.

Newer guns and hardware will always be invented every year that you will loose count. Blue coloured flashy brochures will over speak of each new hardwares capability. It amuses the reader. Does that mean that a soldier is about to be replaced?

I don’t think so....... it is blood and gut of the guy facing an adversary similarly equipped, which fights and wins battles and war. I do agree that a soldier is properly equipped but newer mouse traps is simply marketing.
A

The U.S. Army has begun testing the Microsoft-designed breakthrough technology that offers for the capabilities Soldiers need to regain and maintain overmatch in multi-domain operations on battlefields that are increasingly urban, congested, dark and unpredictable.

According to a recent service news release, Soldiers are testing the multi-functional IVAS goggle during a Soldier touch Point (STP) at Fort Pickett.

The STP is a fast becoming the standard for the new Army Futures Command’s (AFC) rapid acquisitions methodology. STPs allow industry partners to field test system prototypes repeatedly throughout the research and development process to ensure the final product, in this case the multi-functional IVAS goggle, is met with enthusiasm and truly useful when its fielded to the force.

The Soldier Lethality Cross Functional Team (SL CFT) and their partners in military and industry are hosting the STP at Fort Pickett, a National Guard post known for relevant training sites, like the urban village used to replicate combat scenarios that have become commonplace in Middle Eastern operations. The object is to make sure the warfighter drives the design and development based on need and utility. The concept is called Soldier Centered Design, and though it’s not a new concept, it is the first time it has been institutionalized, the first time it has been applied systemically to increase speed and efficiency.

In the spring, Soldier and Marines from various line and special forces units tested an early IVAS prototype based on Microsoft’s heads up display which was designed using Microsoft’s HoloLens 2. That first STP was geared toward proving concept and utility.

The STP underway today at Pickett, the second of four STPs in the 24-month development schedule, is a tougher test designed to assess new capabilities at the platoon level and increase demands on the system in more complex training environments. At this point, about half-way through STP 2, Microsoft has gathered feedback from more than 3,200 hours of user experience.

The SL CFT is one of AFC’s eight CFTs tasked with modernizing the Army after the 2018 National Defense Strategy identified an erosion in close combat capabilities relative to pacing threats around the world. The SL CFT focuses on developing weapons for the Close Combat Force — those who close with and destroy the enemy — to make them more successful in battle. Success is defined in terms of survivability, lethality, situational awareness and maneuverability.

Of all the products and programs in the SL CFT portfolio, IVAS is arguably the most intriguing, as it is the result of complex, non-traditional partnerships and unconventional funding methods (contracts with Microsoft funded through Other Transaction Agreements), and it harnesses a variety of next generation technologies unlike anything the American Soldier has employed ever before.

The final product — officials say it will likely be fielded in the fourth quarter of FY21 — will include a variety of features: a color see-through digital display that makes it possible for the user to access information without taking his eye off the battlefield; thermal and low-light sensors that make it possible to see in the dark, literally; rapid target acquisition and aided target identification; augmented reality and artificial intelligence, to name just a few. IVAS is billed as a fight-rehearse-train system, meaning its function on the battlefield is priority, but its augmented reality capabilities, like real-time mapping, will make it useful for training and rehearsing operations anywhere at any time. And though it’s said to “enhance the survivability” of combatants, its target identification technology will save civilian lives, too.

“When terms like ‘situational awareness’ get thrown around time after time, it’s easy to lose sight of what it really means,” said MAJ Brad Winn, the CFT’s lead action officer for IVAS. “In this case, one of the greatest capabilities of IVAS is Aided Target Recognition, a feature that gives users the ability to quickly identify anything or anyone in sight, which means they can tell the difference between a threat and a civilian non-combatant.”

Winn is one of many members of Team IVAS, a diverse group of Soldiers, civilian employees, academics and industry partners who leverage their respective organizations’ expertise to expedite the development and fielding process. Aside from the SL CFT, Team IVAS includes experts from Microsoft, other CFTs, PEO Soldier, ATEC, the Army’s Combat Capabilities Development Command Research Lab and Soldier Center, and a half dozen other members of that complex integrated network of mostly military command-level organizations known as the Futures Force Modernization Enterprise.

Microsoft “deployed” a team from the west coast to live at Fort Pickett for the duration of this STP, more than a month, to gather feedback and make changes to the goggle every day. They’ll repeat the process next summer, when they put the next iteration of IVAS, the all-weather, ruggedized and militarized, form-fitting prototype to the test in company level operations.

Lockheed Martin has been awarded US$31.9 million by DARPA for further development of a ground-launched, mobile, hypersonic missile system. The contract will allow the defense company to begin the Operational Fires (OpFires) Phase 3 Weapon System Integration program for the boost-to-glide weapon system. 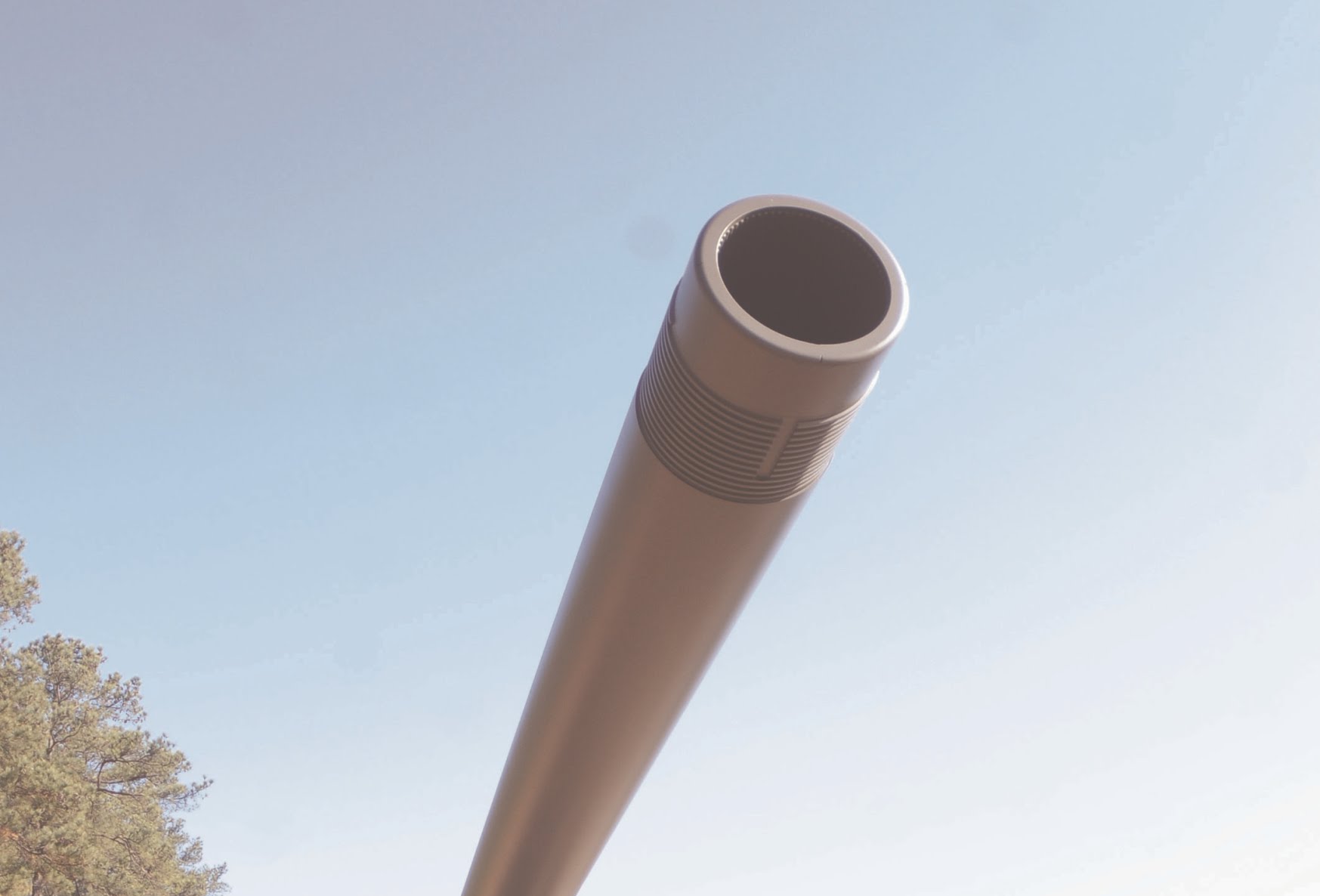 The U.S. Army appears to have accidentally revealed the first image of the newest Strategic Long Range Cannon in a set of presentation material revealed during US-UK Modernization Demonstration Event.

Also was posted some photos on which can replace the posters with information about the long-range cannon that can shoot a projectile 1,000 nautical miles.

The Strategic Long Range Cannon (SLRC) is comprised of a weapon, prime mover and trailer, projectile and propelling charge capable of delivering massed fires at strategic ranges for multi-domain operations.

The SLRC field battery will be included 4 special platforms with cannons and heavy equipment transporters. Also added that the crew of super cannon is 8 personnel per platform.

Autoloader is in development.
A 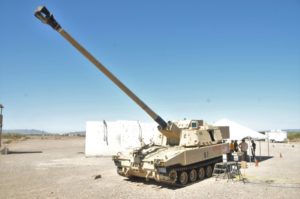 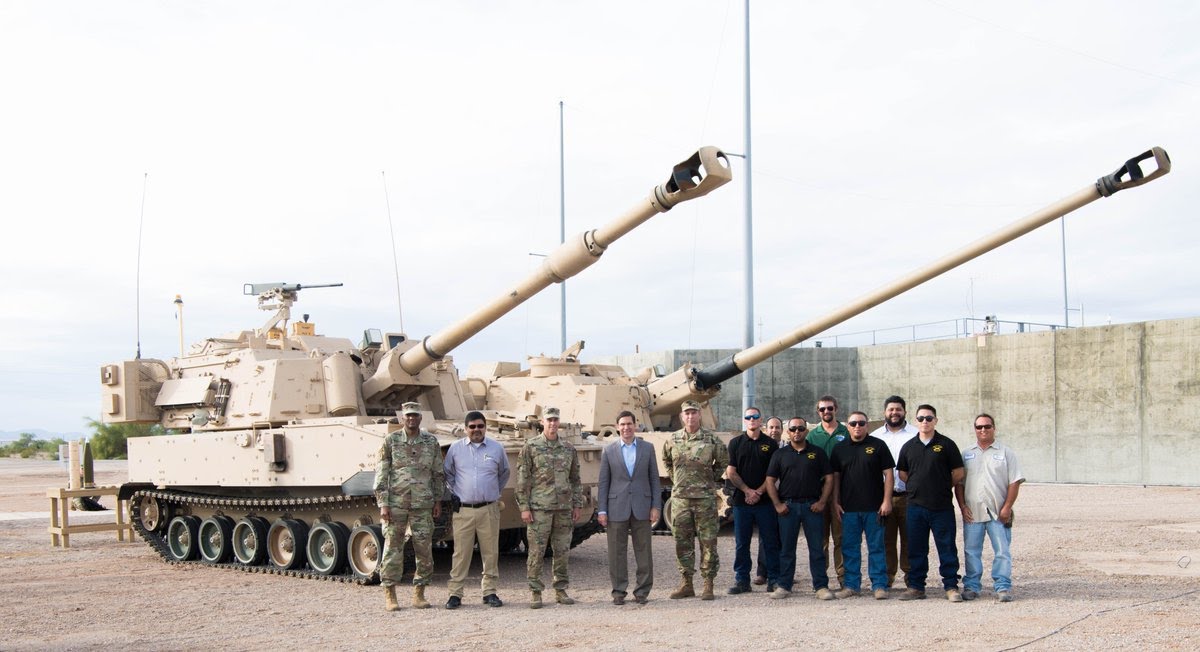 That's a very long barrel, 58 cal. A new autoloader will also be integrated.