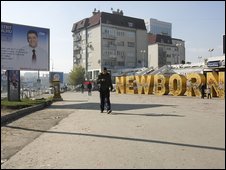 Kosovo has been recognised by
about a third of UN members


The people of Kosovo have voted in local elections - the first poll since the territory declared independence from Serbia last year.

Turnout was put at about 45% by the election authorities.

The Kosovan government had said it was determined to organise a free and fair election in which both ethnic Albanians and the minority Serbs would vote.

Security has been tight, especially in Serb areas where some say they fear attacks by other Serbs if they vote.

Thousands of Nato peacekeepers are still stationed in Kosovo.

Polling stations closed at 1900 (1800GMT), with early results expected by the end of Sunday evening.

Kosovo Prime Minister Hashim Thaci said the vote was "the most important since the proclamation of independence".

"We today confirm that our country has deserved to be independent and to have an European perspective," Mr Thaci said after casting his ballot in the capital, Pristina.

Serbia has urged Kosovo Serbs not to take part in the poll, for fear of legitimising Kosovo's independence.

But some local Serb politicians have said people should ignore that call.

Momcilo Trajkovic, who is running for mayor in the Gracanica enclave near Pristina, said the vote represented "a crossroads for Kosovo Serbs".

"We believe it is the lesser of two evils to participate in the elections, and it is possible this lesser evil can be turned into something good," Mr Trajkovic, leader of the Serbian Resistance Movement, said according to AFP news agency.

Meanwhile there was a call for a boycott on the other side of the ethnic divide.

One Albanian opposition group is discouraging people from voting, because they say the election gives too much power to the municipalities, some of which might end up controlled by Serbs.

Ten years on from Kosovo's brutal war, reconciliation between the two communities is slow, says our correspondent.

If this election is deemed free and fair, it may increase the chance of more states recognising an independent Kosovo, our correspondent says.

Kosovo has so far been recognised by 63 out of 192 UN members.


Deep in the south of Kosovo, near the Macedonian border, the town of Strpce is an isolated little place. 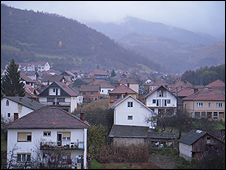 A spirit of co-operation is
taking hold in Strpce​

Surrounded by the snowy peaks of Kosovo's neglected ski resort, communication here is poor. The town's one factory stands empty.

Serbs make up 70% of Strpce's population. And, like most of the 120,000 Serbs in Kosovo, they have largely boycotted all previous elections that were not organised by Belgrade. In their eyes, Kosovo's declaration of independence from Serbia last year was illegal, favoured only by the territory's Albanian majority.

But this time a handful of posters line the centre of town, advertising candidates for Sunday's local election.

It is the first poll in Kosovo since independence and the authorities are hoping for a moderate Serb turnout. Many in Strpce feel cut off from Belgrade. So Serbs here are increasingly working with local institutions, obliged to stomach reality.

Armed with a pile of fliers, Serb mayoral hopeful Bratislav Nikolic works his way down the main street. Ten years after Kosovo's brutal war between Serbs and Albanians, he tells me it is time to move on.

"We have to live and work together. We have to play soccer together," he says. "We can't escape co-operating with Albanians."

He denies that running in the election means he is accepting Kosovo's independence.

"On a local level, we can't recognise a country," he says. "We're fighting for our lives here." 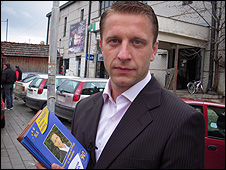 Anti-independence feelings do not stop Mr Nikolic running for office​

There is little expectation that Serbs will openly recognise Kosovo anytime soon. But if they are beginning to engage with Kosovan government structures on the ground, that is still a significant change.

Among Strpce's Serb population, opinions are divided over whether to take part in the poll.

"I don't want to give legitimacy to what the Albanian government is doing around here", says Ivan. "That's why I'm not going to vote in unfair elections."

But Dmitry, a local translator, tells me he supports the elections. "They have to be held. We are the minority in Kosovo, but we can take responsibility for what happens in this municipality if we go out and vote."

In the centre of town, Albanian construction workers are re-roofing a Serb-owned house - the two communities slowly building a new future. Surrounded by his tools, Afrim says life here is returning to normal. "I hope the Serbs do vote," he says, "so we can live together like we used to".

But about 100km (60 miles) north, it is a very different story. The town of Mitrovica, near the Serbian border, has frequently been the flashpoint for clashes between Serbs and Albanians in the past. It remains cut in two by the Ibar river.

In the Albanian-dominated south, election posters hang from the lampposts. But cross the bridge to the Serb north, and they are replaced by Serbian flags. No election is being held here - almost two years after Kosovan independence, Pristina still wields no authority.

Mitrovica's concrete walls are plastered with slogans like "EU go home", "Welcome Russian army". And the Serb national sign - a cross adorned with the Cyrillic letter "S" - is scrawled in graffiti on street corners. It stands for "Samo sloga Srbina spasava": "Only unity saves the Serbs".

Partitioning Kosovo along the Ibar river dividing line has long been discussed. But were it to be implemented, it could destabilise the wider region if other ethnically-split areas demanded the same.

In reality, though, de facto partition already exists and as Serbs elsewhere show signs of co-operating with local institutions, the division between north and south is growing ever wider.

"These are illegitimate elections organised by a quasi-state," says Milan Ivanovic, President of the Serbian National Council for Northern Kosovo. "Some of the Serbs running for office have a criminal past. And those who are going to vote are betraying our national interest." 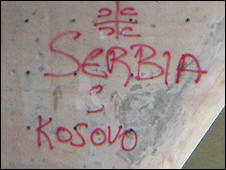 In Mitrovica Serbs have scrawled reminders
of their loyalty to Belgrade​

I put it to him that it is simple for him to maintain that stance: close to the Serbian border, the north has always received the bulk of attention - and money - from Belgrade. But down in enclaves like Strpce, Serbs resent the approach of the hardline north - they do not have the luxury of resisting Kosovan independence so easily.

Mr Ivanovic disagrees. "We have to support our own institutions. Anyway, the Serbs calling for people to take part in the election have very little support."

It is still unclear just how many Serbs will go out to vote - many feel pressurised by Belgrade to boycott the poll and fear for their government-sponsored jobs if they choose to take part. 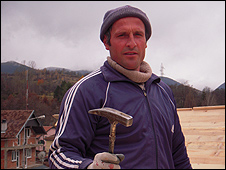 The Serbian government maintains the line that conditions are not right for Kosovan Serbs to participate.

The first election entirely organised by the Kosovan government is a big test for Pristina, keen to show it can run a free and fair vote.

If Kosovo is to grow into an all-inclusive nation, a lot rests on whether the Serbs will take part. They hold the key to Kosovo reaching its goal of becoming a truly multi-ethnic democracy.