Jamshedi Navroze is one of the three main festive days in the Parsi Calendar. The others being Parsi New year in August and Khordad Saal, the birthday of Zarathustra.

Navroze falls on March 21st, which is also Spring Equinox. It is celebrated the world over in various manifestations. It heralds the coming of Spring. In Iran it is celebrated as a ten day celebration and is the one Zoroastrian festival celebrated in an otherwise Islamic country.

---
In India, it is another day for us Bawas to party and eat and drink….as if we ever need a reason. Since it is not a public holiday, most celebrations are reserved for the evening.

Over time, the festival has sometimes been labelled “Jamshedji” navroze, which is a misnomer. It is Jamshedi Navroze, after the ancient Sassanian King Jamshed, who proclaimed the day as the start of the ancient Persian Calendar.

Navroze is one of the oldest known festivals of the Parsis. Firdausi, in his Shah Namesh, Book of Kings, attributes its origin to the legendary King of Persia, Jamshed son of Tehmooraz of the Peshdadian dynasty in Iran. Persia was ruled by many dynasties, the last being the Zoroastrians. It is said that Jamshed was a great king and cared for the welfare of his subjects. Though there were no clocks to measure time, the King sought the help of the great astronomers and mathematicians of his day who devised a calendar which was known as the “Tacquim-e-Nowrooze-e-Sheheriyari”. The King accordingly decided that Navroze or the New Year would start on the Vernal Equinox when night and day were of equal durations.

The rituals of the day include a visit to the fire temple and then the gathering of the entire family to partake in drink and food.

--
Wishing all Mubarakabad on Jamshedi Navroze 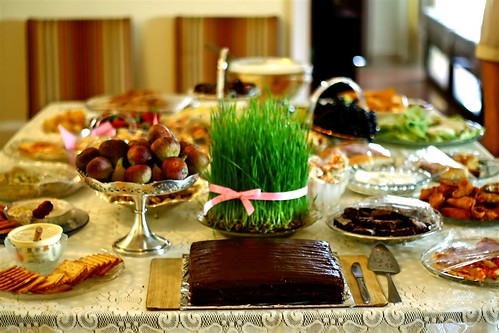 Navroz is the first day of the first month of the Zoroastrian year.

Thus spoke Zoroaster, the great prophet of Iran to his followers who in India are known by the name of Pasis. "There is but one path, the path of ASHA. All other paths are false paths" - YASNA

This quotation from Yasna sums up the teachings of Prophet Zoroaster. Asha is a path of action - good thoughts, good words and good deeds - with emphasis on service to the suffering humanity. Every living being according to this religion is believed to posses the eternal principle of FRAVASHI.

Zoroastrian is monotheistic in its higher ideology having AHURA MAZDA as its Supreme Deity and AHRIMAN as a lesser power of evil, which continually retards the smooth progress of good-universe is conceived as a battlefield between Ahura Mazda and Ahriman. In this confrontation, Ahura Mazda will ultimately defeat Ahriman.

In the Zoroastrian religion, the theory of Re-incarnation does not exist FIRE is looked upon as a visible symbol of godhead and it is believed that the Sacred Fire was brought to earth from heaven by the prophet himself. In Zoroastrian temples that are known as Fire temples, fire is kept burning all the time. These temples are tended by Priests called Jozdalhregavs.

Over 3000 years ago Shah Jamshed of the Peshadian dynasty ascended the throne on "NAVROZE" - nav meaning new and roze meaning day. It was the day of the Equinox - a day when light and darkness stand equal on the scale of space and time when the length of the day equals that of the night. That particular day came to be known as Jamshed Navroz and is celebrated even in modern times with lot of feasting.

This new day is the beginning of a new year, a new awakening into an inner sphere of spiritual consciousness and anew vision of life. It is the time of questioning of looking within oneself, of seeing the millions of miracles that take place within the vast universe.

Navroz means spring when Mother Nature casts off everything that is old or super-flows and dresses herself like a young bride in every vibrant colour and hue, rejoicing in her own pure spiritual beauty. Thus Navroz is a new dawn in everyone's life.

Parsis believe that there are six seasons in a year with an important festival in each of them. These festivals are known by the name of GAHAMBARS. These were originally agricultural festivals but as Zorastrianism developed, they assumed religious significance. Parsis celebrate Khordad Sal as the birth of their Prophet Zorastor who was born in the middle of second millennium B.C. His birth anniversary falls on the 6th day of the first month of the Zoroastrian Calendar and is observed with rejoicings. In each of these festivals Parsis do a lot of charity to the needy. To extend a helping hand to the poor is special characteristic of the Parsis.

Men, women and even children wake up early, bath and dress up in new clothes. They decorate the threshold and steps of their houses with coloured powders, light incense sticks and sprinkle sandalwood powder on live coals, kept in a censor. All this not only is auspicious but also is meant to purify the air.

Food plays a very important role as a significant part of all Parsi festivals. Parsi food is a delicious blend of West Indian and Indian cuisine. Parsis being non-vegetarian, fish, mutton, chicken, nuts, spices and fruits are bought a day before and a variety of dishes are prepared for the following day of Navroz.

For breakfast on the day of Navroz two special dishes are served. One is the "Ravo" made with Suji, milk and sugar and the other is fried vermiceli cooked in sugar syrup and sprinkled with raisins and lot of almond slivers. After breakfast all the family member go to the nearest Fire Temple or Agiary as it is called. In the temple a "JASHAN" - a thanks giving prayer is performed by the priest and each one of the assembled gathering offers sandalwood to the Holy Fire. As per the Parsi custom everyone has to cover their heads while praying inside the temple. Children put on cops of gold or silver brocade, men put on black velvet caps and the women pull their sari pallus over their heads. After the "Jashan" ceremony all people greet each other by saying "Sal Mubarak".

Lunch consists of Pulaf, rich with nuts and saffron, fish in green masala and spicy chicken curries. In Parsi community besides all the delicacies, cooking plain rice and moong dal is a "must" on this Navroz day. Food packets and clothes are handed over to the poor Parsi families by the children of the family. Parsi children are thus taught to give and share with others.
Throughout the day on this festival of Navroz, there is much visiting of friends and relatives. Every visitor is offered some sweet and a glass of "faluda" - a sweet and chilled vermicelli and flavoured with rose essence. In all Parsi homes a silver tray is kept ready with roses, coconuts and kumkum for `tilak'. Rose water is freely sprayed on every visitor as he enters. By this time the artistic and coloured designs on the doorsteps are smudged and messy but no one pays attention in the hilarious mood of the festival.

Although quite westernised in their life styles, Parsis are traditionally rigid in thoughts. So they observe all the rituals, prayers and modes of greetings as laid down in their religion for celebrating NAVROZ which is their New year.

Many of the rituals, prayers, greetings, exchangings, gifts, decorating and beautifying the houses are common to all the Indian festivals. But what is of paramount importance in the case of Parsi festivals is the free mixing of men and women which certainly is a sign of equality.