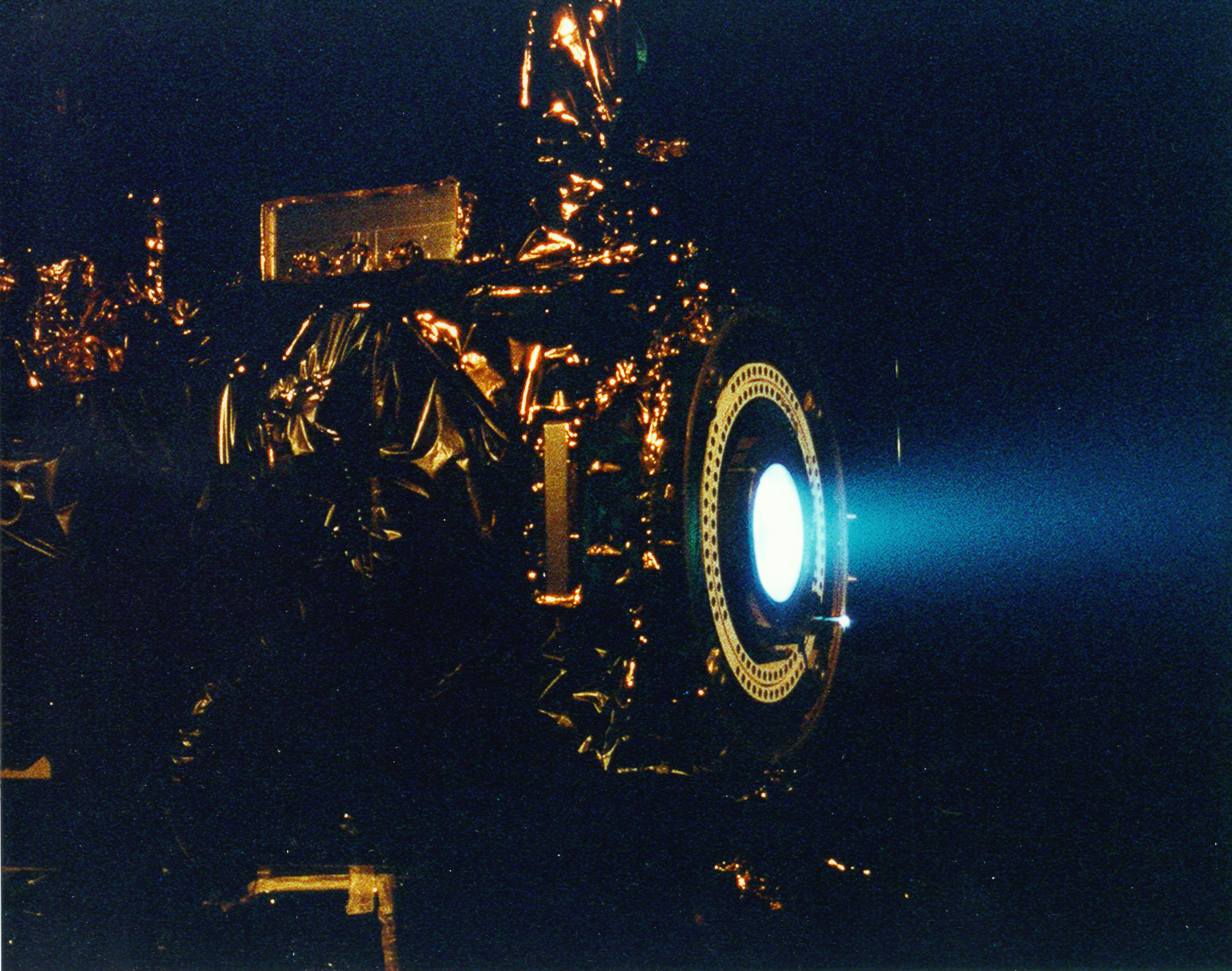 The electric propulsion tech is in very early stages of development with promising future. These thrusters use very little space/energy compared with conventional propellants.Few years back,NASA used this propulsion system to manoeuvre some its satellite.

At this point,these systems max output is very very low but once it achieves maturity,it might replace the conventional propulsion system in the spacecrafts.

Good news is,even india started investing in this tech,so this thread might come in handy on tracking the development.

So for the basic understanding, I'll quote from wiki god,


An ion thruster or ion drive is a form of electric propulsion used for spacecraft propulsion. It creates thrust by accelerating ions using electricity.

An ion thruster ionizes a neutral gas by extracting some electrons out of atoms, creating a cloud of positive ions. These ion thrusters rely mainly on electrostatics as ions are accelerated by the Coulomb force along an electric field. Temporarily stored electrons are finally reinjected by a neutralizer in the cloud of ions after it has passed through the electrostatic grid, so the gas becomes neutral again and can freely disperse in space without any further electrical interaction with the thruster. Electromagnetic thrusters on the contrary use the Lorentz force to accelerate all species (free electrons as well as positive and negative ions) in the same direction whatever their electric charge, and are specifically referred to as plasma propulsion engines, where the electric field is not in the direction of the acceleration.[1][2]

Applications include control of the orientation and position of orbiting satellites (some satellites have dozens of low-power ion thrusters) and use as a main propulsion engine for low-mass robotic space vehicles (such as Deep Space 1 and Dawn).[3][4]

Ion thrust engines are practical only in the vacuum of space and cannot take vehicles through the atmosphere because ion engines do not work in the presence of ions outside the engine. Additionally, the engine's minuscule thrust cannot overcome any significant air resistance. Spacecraft rely on conventional chemical rockets to reach their initial orbit. 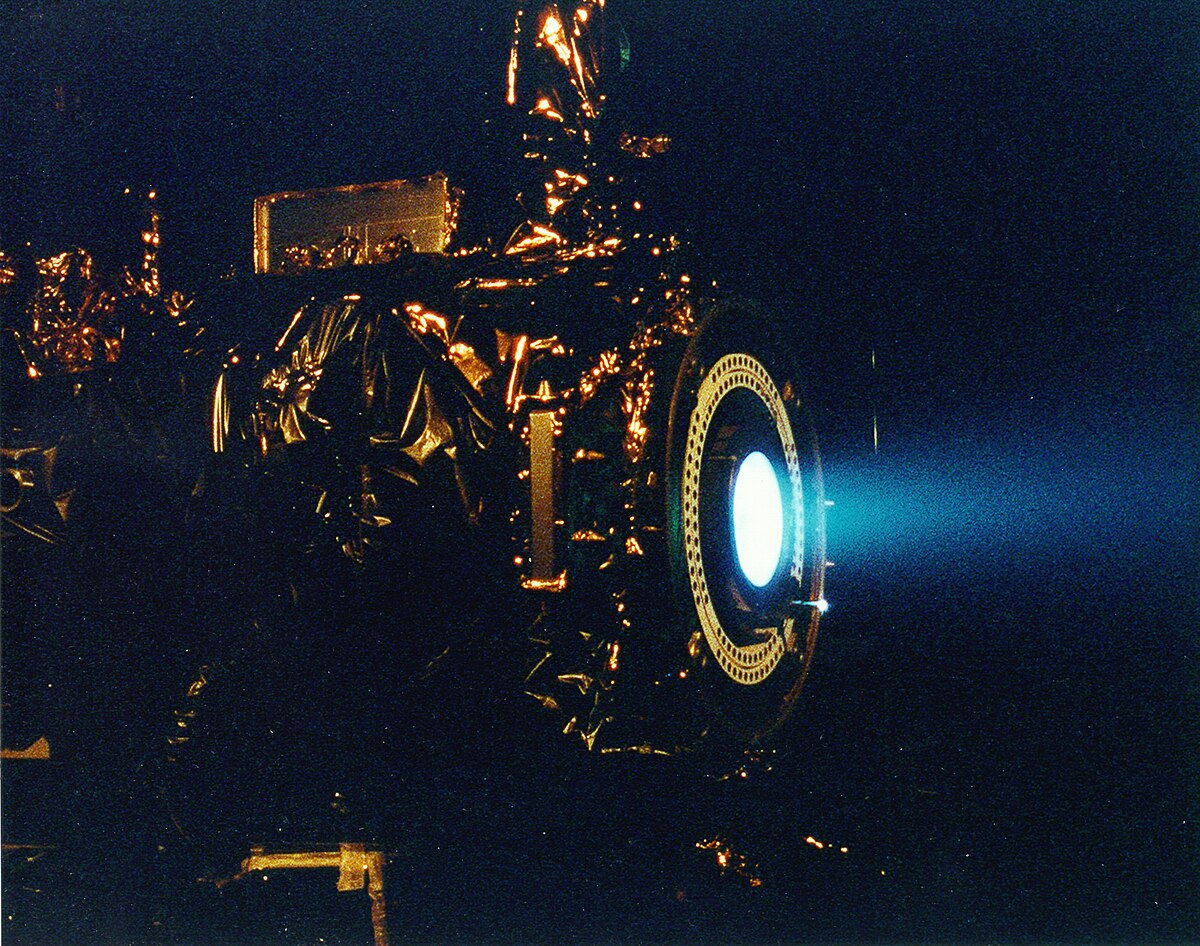 
The News Minute | March 29, 2015 | 7:50 am
IST
The Indian space agency is looking at the possibility of having ion propulsion system to power its future satellites, said a senior space scientist on Saturday. Speaking to reporters, Liquid Propulsion Systems Centre director K.Sivan said: "In order to reduce the satellite mass, we are looking at ion propulsion system." The centre is part of Indian Space Research Organisation (ISRO). Presenly the satellite fuel occupy space and make it heavy. According to Sivan, the proposed technology would be tested in a communication satellite.
In an ion engine, Electric power is used to create charged particles of the fuel, usually the gas xenon, and accelerate them to extremely high velocities. The exhaust velocity of conventional rockets is limited by the chemical energy stored in the fuelâ€™s molecular bonds, which limits the thrust to about 5km/s. Ion engines are in principle limited only by the electrical power available on the spacecraft, but typically the exhaust speed of the charged particles range from 15km/s to 35km/s. US space agency NASA used the ion engine in its Dawn spacecraft.

To read more about the engine and the journey of the spacecraft, follow the link to an earlier story below. Read - Dawn of a new era: the revolutionary ion engine that took spacecraft to Ceres The other technology that the centre is working on is semi-cryogenic engine. He said the centre has tested the ISRO developed cryogenic engine for 20 seconds, and the duration of the tests will be increased in the future. India's heavy rocket - Geosynchronous Satellite Launch Vehicle-MkIII - will be powered by the cryogenic engine.

The News Minute | March 29, 2015 | 7:50 am IST The Indian space agency is looking at the possibility of having ion propulsion system to power its future satellites, said a senior space scientist on Saturday. Speaking to reporters, Liquid Propulsion Systems Centre director K.Sivan said: "In order...

Bangaluru based Pvt company called hhv also part of the drive,I thought its worth a mention

Integrated test facility to measure the thrust of ion-propulsion engines

The ‘Mars Orbiter’ also known as “Mangalyaan” bid adieu to its Earth orbit putting India in the elite club of countries venturing into space explorations and planetary studies. The secret of Indianspace programme's trailblazing affordability is its Indigenization. The successful Indian mars mission not only astonished the global space agencies but also promulgated the goldmine of technological development prowess in the country.

The indigenously evolved “Mangalyaan” will travel in its parabolic trajectory and is due to orbit Mars in September 2014. Indian space scientists & engineers will carry out mid-course corrections using the orbiters xenon-propulsion thrusters, to ensure its trajectory to the red planet in a pre-determined atmospheric drag free path. These thrusters are also being used to control the spacecraft altitude and augment it’s thrust-level.

These Ion-propulsion thrusters are being used to overcome -critical hurdles faced by the spaceflight. Therefore ground based test facilitiesare required to evaluate thruster characterization, plume interaction, endurance and acceptance testing. The study of the thruster efficiency enables to compute mean propellant exit velocities and specific impulse which are essential calculations for any deep-space missions.

Thesetechnical development capabilities of HHV resulted in a recent order from the Indian Space Industry for a large size ground-based integrated test facility to measure the thrust of high power (8.0kW) ion-propulsion engines

HHV has in the past custom built two such a facilities to measure the thrust of 0.5 – 1.5 kW ion-propulsion engines for the Indian space centers. These xenon-thruster ground based testing systems are being used for their thruster engine developmental programme.

Integrated test facility to measure the thrust of Xenon-propulsion engines

The large integrated test facility to measure the thrust of high power xenon-propulsion engines has two horizontally mounted cylindrical chambers fabricated with a smooth inner surface of emissivity of 0.1 to prevent the adsorption .

The large size cylindrical chamber is of size 9.00m length and 3.5m diameter has;

· A set of cryogenic panels placed inside the top walls of this chamber to absorb xenon ions to maintain the operational vacuum of 2 x10-5mbar in xenon atmosphere.

· A residual gas analyzer located inside this chamber measures the partial pressure of gases (Impurities).

· A set of mechanical, turbo and cryo-pumps based vacuum systems enables to create an ultimate vacuum level in the range of 1 x10-6 mbar in a clean environment.

The Xenon- thruster engine to be tested will be mounted on a platform moving on a rail inside a small cylindrical chamber of size 1.50m length x 1.00m diameter.

An independent turbo-pump based vacuum system provided with the small chamber creates a vacuum in the range of 1 x10-6 mbar. It can be isolated from a main chamber by a 1m gate valve for loading and unloading the xenon-thruster engine without disturbing the vacuum level in the main chamber.

The intensity of the xenon-ion beams will be detected using sensors. These sensors are mounted on a PC interfaced vacuum compatible motorized ion-diagnostic arms.

The ion-diagnostic arms are mounted on a platformpositioned inside the large vacuum chamber. It can be moved XY axis and up and down in a predetermined angle in front of the plumes (ion-beams). The ion-diagnostic arms platform can be moved back and forth to place it at various distances from the xenon-thruster engine to measure the intensity of the plume at various distances.

The signal produced by the sensor will be amplified and measured to determine the vector and the thrust of the ion-beam.

In case the normal set up fails a redundant is foreseen with the pumping system, measuring instrumentations, emergency power supply which allows continuation of the on-going test until the unit(s) is/are set right. The PLC also has stand-by processors in hot redundant mode. These redundant facilities ensure continuous operation of chamber for a few weeks without shutdown.

A number of trials have been conducted to ensure the repetitiveness of stringent measurements. Specialists and engineers of each operation from the Indian space organization have physically verified and cleared the systems for commissioning at their facility.

HHV is proud of associating with the Indian Space industry and continues to support in indigenizing such facilities for space programme to make India self reliant.