Kshatriya87 said:
@Indx TechStyle As per yesterday's budget, Jaitley also said that oil reserves will be increased in India. Do you have any additional details on that?
Click to expand...

Does India Uses Biofuels Or Not That too how much

Hemu Vikram Aditya said:
Does India Uses Biofuels Or Not That too how much
Click to expand...

Uses but not very much.

Government is trying to boost it though.

Indx TechStyle said:
Uses but not very much.

Government is trying to boost it though.
Click to expand...

Indian Navy will set up meteorological facilities and impart training for the Myanmar Navy. This was agreed upon during a recent visit of a Myanmar delegation to Kochi. Myanmar will soon send a proposal with its requirements.
Click to expand...

This fits into India’s overall effort to boost strategic cooperation under the ‘Act East’ policy and will help offset increasing Chinese presence in its neighbourhood.
Click to expand...

The three-member Myanmar Navy delegation was on a four-day visit to Kochi from February 26 to March 2. “The visit is primarily aimed at familiarising the officers on Indian Naval Meteorology and Oceanography (METOC) operational/training facilities and exploring avenues for defence co-operation in the field,” the Navy said in a statement.
Click to expand...

The Navy said the delegation also called on the Chief of Staff, Southern Naval Command (SNC), Rear Admiral R.J. Nadkarni, who “assured them all assistance in terms of training and setting up of meteorological facilities for the Myanmar Navy.”
Click to expand...

“He requested the delegation to send a proposal for the SNC to take up the same with higher authorities,” the Navy stated.
Click to expand...

As a prelude to the cooperation, the delegation was given a tour of the Indian Naval Meteorological and Analysis Centre (INMAC), as well as the School of Naval Oceanology and Meteorology (SNOM).
Click to expand...

Saudi Arabia allows Air India to use its skies for flights to Tel Aviv: Report 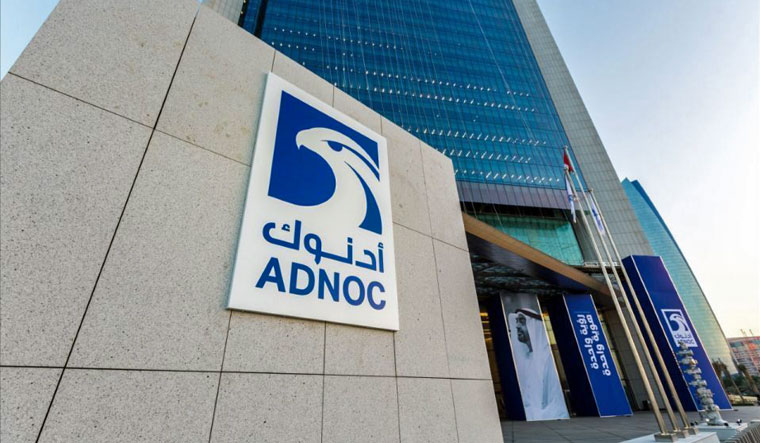 India on Monday signed an initial pact to lease out a part of its underground strategic oil storage at Padur in Karnataka to Abu Dhabi National Oil Co (ADNOC) for storing crude oil, the second such deal with the UAE firm this year, Oil Minister Dharmendra Pradhan said.
Click to expand...

India has built 5.33 million tonne (MT) of emergency storage—enough to meet its oil needs for 9.5 days, in underground rock caverns in Mangalore and Padur in Karnataka and Visakhapatnam in Andhra Pradesh. It has allowed foreign oil companies to store oil in the storages on condition that the stockpile can be used by New Delhi in case of an emergency.
Click to expand...

ADNOC had in February this year signed a pact to fill half of the 1.5 MT strategic oil storage at Mangalore. On Monday it signed a similar pact for Padur.
Click to expand...

"ISPRL (Strategic Petroleum Reserve entity of India) and ADNOC of UAE signed MoU to explore possibilities of ADNOC investment in filling up of crude oil in Padur strategic reserve in Karnataka," Pradhan, who is in Abu Dhabi for the agreement signing, tweeted.
Click to expand...

The agreement allows ADNOC to sell or trade crude oil storage in the storages to local refiners but give Indian government the first right to the oil in case of an emergency.
Click to expand...

"ADNOC signs MoU with the Indian Strategic Petroleum Reserves Ltd (ISPRL), to explore storage of crude oil at Padur underground facility in Karnataka, which has a 2.5 MT (about 17 million barrels) capacity," the UEA firm tweeted.
Click to expand...

Official sources said the pact followed the Cabinet's last week decision of approving filling up of the underground strategic oil storage at Padur by foreign oil companies.
Click to expand...

While a third of the Visakhapatnam facility has been hired by Hindustan Petroleum Corp Ltd (HPCL), ADNOC and government of India filled the storage at Mangalore. The 2.5 MT Padur facility remained empty.
Click to expand...

UAE Oil Minister Sultan al-Jaber said:"India is an important oil market and the agreement with ISPRL underscores the strategic energy partnership between the UAE and India that leverages the UAE and ADNOC's expertise and oil resources."
Click to expand...

ADNOC in another tweet quoted Pradhan as saying that "the MoU with ADNOC will allow ISPRL to explore opportunities related to the possible storage of ADNOC crude at Padur, which would help to significantly strengthen the country's strategic petroleum reserves."
Click to expand...

Padur storage has four compartments of 0.625 MT each and ADNOC may use half of the storage capacity for stocking its oil.
Click to expand...

The total 5.33 MT capacity under Phase-I of the Strategic Petroleum Reserve (SPR) programme is estimated to supply about 9.5 days of India's crude requirement.
Click to expand...

In Phase-II, India plans to build an additional 6.5 MT facilities at Chandikhol in Odisha and Padur, which is expected to augment the emergency cover against any supply disruption by another 11.5 days.
Click to expand...

Sources said oil firms like ADNOC could use the Padur storage to stock their oil and sell it to refineries in the region on commercial terms.
Click to expand...

India, which meets 83 per cent of its oil needs through imports, will have the right of first refusal to buy the crude oil stored in the facilities in case of an emergency, they said.
Click to expand...

Indian refiners maintain 65 days of crude storage, and when added to the storage planned and achieved by ISPRL, the Indian crude storage tally goes up to about 87 days. This is very close to the storage of 90 days mandated by IEA for member countries.
Click to expand...

ADNOC had last year given up its crude storage lease in South Korea and instead agreed to store oil at Mangalore in a bid to establish a ground presence in the world's third-largest oil consuming nation.
Click to expand...

Out of the crude stored, a part would be used for commercial purposes by ADNOC, while a major part would be purely for strategic purposes.
Click to expand...

ADNOC hired the Mangalore storage just as it ended a contract to store 6 million barrels of crude oil at Korea National Oil Corp's Yeosu facility in the country's southwest coast.
Click to expand...

South Korea had first right over the oil in the event of a supply emergency.
Click to expand... 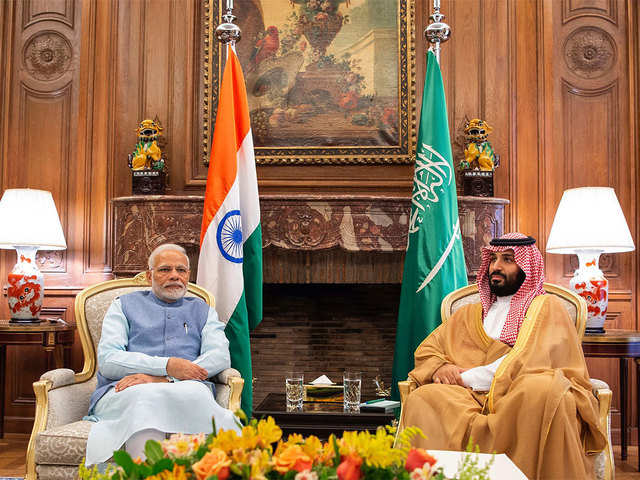 The two leaders met at Salman's residence in the Argentinian capital Buenos Aires on the sidelines of the G-20 summit.

The two leaders met at Salman's residence in the Argentinian capital Buenos Aires on the sidelines of the G-20 summit.
Click to expand...

In the field of energy, they discussed the kingdom's readiness to supply India with all of its needs of oil and petroleum products, as well as Saudi Aramco's investment in refineries in India, especially the large refinery on the western coast of India and in the field of crude oil storage, the report said.
Click to expand...

The import of crude oil by India forms a major component of bilateral trade with Saudi Arabia being India's one of the largest suppliers of crude oil, accounting for almost one-fifth of its needs.
Click to expand...

According to the International Energy Agency, this demand is expected to reach 458 million tonnes by 2040.
Click to expand...

In the military field, they discussed strategies to localise military industry and cooperation in the field of military manufacturing in both countries, the report said.
Click to expand...

They also reviewed what has been accomplished during the previous two years in the area of bilateral relations.
Click to expand...

The two sides reviewed the available opportunities to export the Saudi non-oil products to India, and ways to develop bilateral trade through sustainable arrangements, especially in strategic commodities such as Saudi fertilizers as well as promoting the exchange of investment in the industrial sector, it said.
Click to expand...


The Kingdom of Saudi Arabia could decide to ‘correct’ the ‘distorted’ map on its 20 Riyal banknote at the requests of the Indian government, reports indicated. Adding that Saudi Arabia is also likely to withdraw the banknote soon, reports said the two sides had reached a consensus on India’s position in Jammu & Kashmir.

As first reported by EurAsian Times last month, Saudi Arabia had released a 20 Riyal banknote to commemorate its presidency of the G-20 summit on 21-22 November 2020. The backside of the note had angered both India and Pakistan as the map showed the whole of Jammu and Kashmir, including Pakistan-controlled Kashmir as a separate territory altogether. The map also did not show Gilgit-Baltistan as part of Pakistani territory.

The territory of Kashmir is disputed between India and Pakistan for the past 70 years, and Saudi Arabia seems to have ignored the claims of both the neighbors over the Kashmir region, even neglecting the concerns of its long-time ally Pakistan.

But now there are all the indications of the Kingdom endorsing India’s claim on the territories of Jammu & Kashmir by releasing a new map. Considering the relations between the two countries are reaching new heights, with commercial transactions happening in billions, through trade and mutual investments, Saudi Arabia is expected to officially acknowledge India’s claims on the Kashmir territory.

Saudi Arabia has given clear indications of where its priorities lie, which is India. The kingdom is slated to invest 15 billion USD in India’s Reliance Industries, as reported by Economic Times on 10 August 2020. Then there is the investment of around 60 billion USD in an oil refinery in India by the Kingdom, other than a plethora of other high-value investments into various Indian companies. 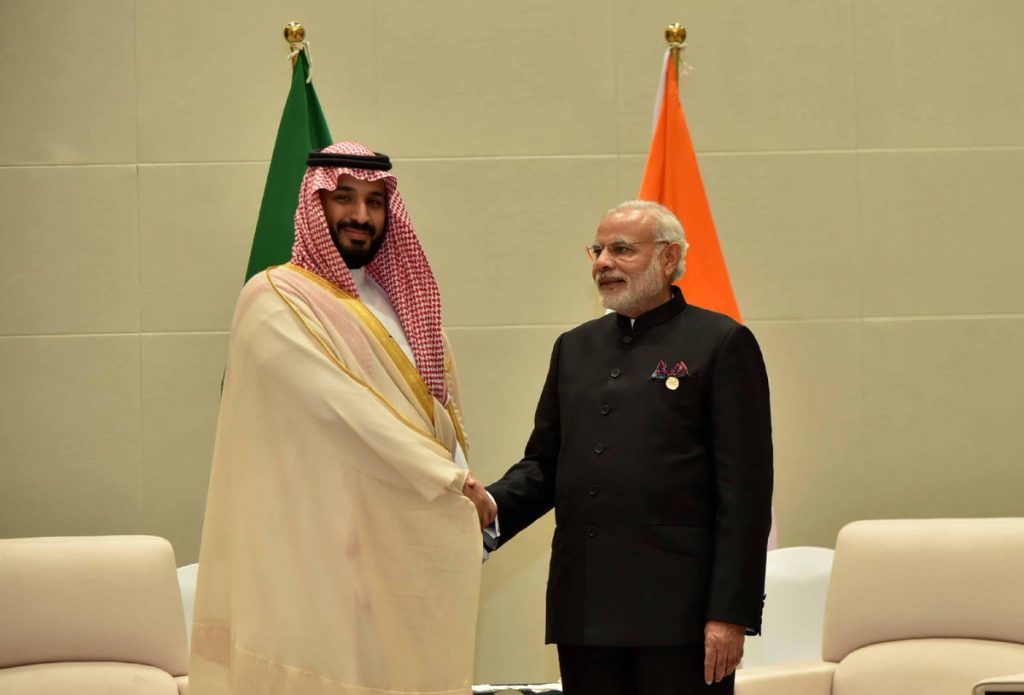 On the other hand, the relations of Saudi Arabia with Pakistan have hit a new low after a slew of political and geopolitical tensions this year. The Kingdom has repeatedly refused to endorse the position of Pakistan on Kashmir on multiple international platforms, resulting in criticism of its foreign policy from Pakistani leaders.

The tensions had reached a stage where Saudi Arabia decided to end a loan and associated oil supplies to the cash-strapped country after Islamabad criticized the Kingdom on its Kashmir stand in the Organization of Islamic Countries (OIC).

The new geopolitical developments have worsened this division, however, once Joe Biden takes an oath in January, Saudi Arabia may not enjoy the backing it did under Trump’s regime, which could force it to tone down its rhetoric. The ongoing G20 Summit is going to throw up some interesting news about the power divisions underway across the world, and a consensus on Kashmir.

Ramayana-Mahabharata is being taught in Saudi Arabia, where Islam was born
Islamic Nation saudi Arabia has begun to mold itself in the midst of the changing global landscape. The Muslim country has launched a new “Vision-2030” for the educational sector, in which students are also being taught the history and culture of other countries under cultural courses.


It also includes Ramayana and Mahabharata as courses. So that Saudi can stand itself in the competition of global development. According to Saudi’s “Vision-2030”, the English language will be included as a necessary language, as it is considered a good medium of communication.

Ramayana-Mahabharata is being taught in Saudi Arabia, where Islam was born

Islamic Nation saudi Arabia has begun to mold itself in the midst of the changing global landscape. The Muslim country has launched a new "Vision-2030"