there was already a old thread on this topic.

check it and merge both threads.
T

my choice is also no 4. uses the hindi word "ra", and pretty easy to make as well.

Yeah the fourth one looks to be the least complicated too if you consider that you will use it while writing too.

Symbol should be easy to replicate in written form, not just in ASCII or typesets. It's easy to write $, â‚¤, and â‚¬ on paper. So I'll have to go with the 4th row, 2nd column in the chart Bhramos posted (by Rahul Mishra). It's the easiest to write.

Indian government has to take decision on having INR represented by a symbol much like other makor currencies of the world like Dollar, Euro etc.

i think of t he choices shortlisted, i like 4 the most.
L

More symbols to choose from

clean.easy to write and has Indian ethos written all over it.

The rupee's entry into the elite club of currencies with their own symbols will take longer with the government today deferring a decision on the issue.

The Cabinet was to finalise the symbol today, but the matter was deferred after Finance Minister Pranab Mukherjee asked for more time to go through the short-listed signs, sources said.

The issue was on the agenda of the Cabinet, which met under the chairmanship of Prime Minister Manmohan Singh here, but was deferred, sources said.

The government has shortlisted five designs for the rupee from among the symbols suggested to the Ministry of Finance by the public.

In the Budget this year, Finance Minister Pranab Mukherjee had said that "in the ensuing year, we intend to formalise a symbol for the Indian rupee, which reflects and captures the Indian ethos and culture. 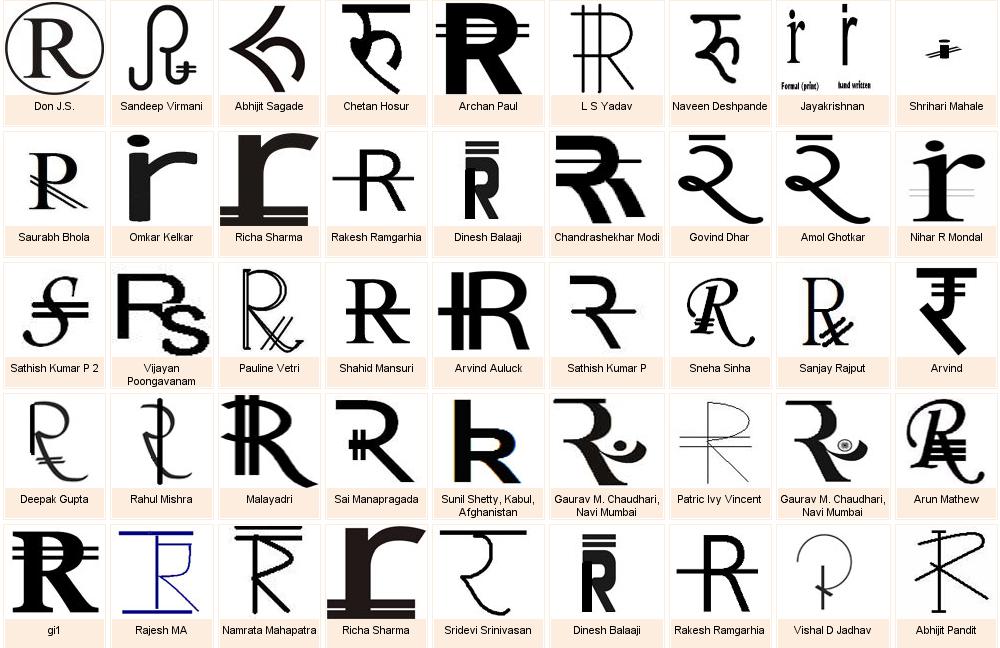 I like the one third from the left on the second row.

Although admittedly, difficult to write because of the Palatino typeface. Not too many are used to it, myself included.

The above five designs had been shortlisted by the government from around 25,000 applications following an all-India contest. The cabinet will announce its final decision today. Currently we represent Indian Rupee as "Rs." or with its ISO Code "INR".

After the final decision, we hope, the keyboard manufacturers, Mobile Manufacturers and Software developers will implement the "New Rupee" symbol as soon as possible.

The jury has given its verdict: the rupee will retain its Indian character with an international flavour. The five-member panel has chosen IIT post-graduate D Udaya Kumar's design from among five shortlisted symbols and recommended it for Cabinet approval.

Kumar's symbol (on the left) is an amalgam of the Devanagari 'Ra' and the Roman capital 'R' without the stem, very much in line with what Finance Minister Pranab Mukherjee had envisioned. "We intend to formalise a symbol for the Indian rupee which reflects and captures Indian ethos and culture," Mukherjee said in his Budget speech this year.

The chosen symbol has the Finance Minister's approval, said a Ministry official.

The Ministry had organised a symbol design competition with a prize money of Rs 2.5 lakh with the condition that it should be applicable to the standard keyboard, be in the national language script or a visual representation and should represent the historical and cultural ethos of the country.

While the basic aim of the new symbol is to provide the Indian rupee international recognition as the country's economy exerts more influence in the global space, the unique sign will also help isolate the currency from the current abbreviation 'Rs' which is used by neighbouring Pakistan, Nepal and Sri Lanka.

Kumar's concept, an official said, is based on the Tricolour and "arithmetic equivalence". While the white space between the two horizontal lines gives the impression of the national flag with the Ashok Chakra, the two bold parallel lines stand for 'equals to', representing balance in the economy, both within and with other economies of the world.

When contacted, Kumar said he was unaware of his design having been ranked first by the jury. "I hope your news is real," he told The Indian Express from IIT Bombay. He joins IIT Guwahati as a faculty member in the Department of Design tomorrow. 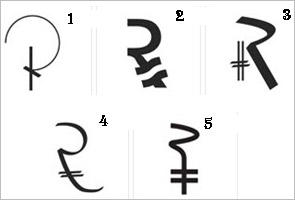 if this images where shortlisted then how come below was selected

i think one reported by NDTV NEWS IS WRONG

there is another one by one of the poster with little difference . is it coincidence or :happy_2: 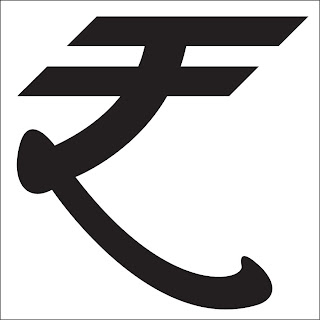 the 5 shortlisted ones reported in the media were wrong i read somewhere.

Congratulations to India and also to Uday Kumar for giving us a great symbol for Rupee. I have already used the symbol in making invoice!!!

This article is published in Business Standard. Rupee originates from 'Ruppyyah' ancient word was 'Rupyakam'. Great to have it in Devnagari.

The Indian rupee's new symbol, an elegant, simple and brilliant combination of Sanskrit Ra and the English R without the stem, deserved a more dignified debut. A minister holding up an A4-size sheet of paper for cameras sitting at her desk? No fancy unveiling, no fireworks or music, no celebrations at all? How unfortunate. How inelegant. How crass.

The Indian rupee, which is the original rupee, dates back centuries. Historians believe the name derives from the Sanskrit Rupyakam and date the use of silver rupee coins to 6th century BC. The Indian rupee currency note of today carries the Sanskrit name Rupyakani. The minting of currency named "rupee", or "ruppayyah" is believed to date back to the reign of Sher Shah Suri (1486-1545). This continuity perhaps enabled Pakistan to continue to call its currency post-Partition as the Pakistani rupee.

Going beyond the sub-continent, the Indian rupee acquired the two most important characteristics of money — as a unit of exchange and a store of value — in a wide range of countries along the coast of East Africa, the Arab Gulf (presently the member countries of the Gulf Cooperation Council), the Indian Ocean island nations, the whole of the Indian sub-continent, and well into South-East Asia.

When a currency with such grand and proud history finds a renewal of life, as India becomes a trillion-dollar economy with rising shares of world trade and capital flows, the assignation of a new symbol is a momentous event that generations to come will remember. Could someone in government or the Reserve Bank of India not have thought of a better way of unveiling the new rupee sign to the world?

In a country that enjoys ceremony, pomp and circumstance, where symbols and symbolism matter, someone should have thought of a grand unveiling — perhaps near India Gate lawns — with the President of India declaring open a nicely designed large replica to television cameras.

Would it all have been making much of a muchness? Certainly not. Nothing is at once so personal and so public in the social life of a person than the unit of currency one deals with. Next to language, it is our most important link with the world around us.

Which is often why politicians confuse the value of a currency with national pride. During RBI Governor Bimal Jalan's term in office, he had sleepless nights dealing with a situation, after the Pokhran-II "Shakti" nuclear tests, when Sushma Swaraj declared that now that India was stronger, the rupee would become stronger too!

An appreciating rupee was not what RBI wanted at the time. China has demonstrated the uses of under-valued currency for a nation seeking power. A depreciating rupee is not necessarily a sign of a weakening economy. Rather, it could be the means of strengthening an economy's competitive position.

At any rate, patriotism can take a holiday if it pinches one's pocket. In 1998, Ms Swaraj had forgotten the lesson of 1991. The first to take their money out of India at the time of the 1990-91 balance of payments crisis were, in fact, non-resident Indians, or such Indians who had put their money into NRI accounts. As the rupee weakened, the flight of capital, triggered by panic among Indians, speeded up the outflow.

But India has come a long way from that time. While any currency, including the US dollar, can be threatened by a loss of confidence, the fact is that there is greater confidence in the Indian rupee today than at any time in recent history.

Time was when the only places outside India where the rupee would be accepted were Nepal, Maldives, London's Southall and Mustafa's in Singapore! From those glorious days of the "Empire" when the Indian rupee had takers all around the Indian Ocean littoral, the rupee saw its days of ignominy too. As India's economy becomes bigger and more competitive, its currency too has acquired a new spring in its feet. The new symbol for the rupee is a symbol of this new confidence.

And so, how appropriate that the new design, combining the ancient and the modern in contemporary India — Sanskrit and English, the curve and the slash — should come from a bright young teacher, Udaya Kumar of Tamil Nadu? I would not have celebrated the new design as much if it had come from some fancy designer in Paris, London or Rome. It is the earthiness and the Indian-ness of the designer that lend special meaning to the symbol.

I am not surprised that the UK Guardian quotes some fancy London designer awarding Udaya Kumar a "B or a B plus" for what he calls an "unimaginative" design. I am personally delighted RBI did not chase such fancy western designers and opted for Udaya Kumar's culturally rooted design.

In celebrating the rupee's new symbol, we must also celebrate Indian design. It is a pity that Indian design is not getting its due in a rapidly growing India. Consider the importance that China and Japan have long attach to design. Even a small city-state like Singapore has two world-class design institutions, while students of design in India have to compete for a few dozen seats, after reservations are accounted for, at Ahmedabad's National Institute of Design, and a couple of private institutions.

Indeed, given this neglect of design as a discipline, despite India's rich cultural heritage, it is truly amazing that indigenous talent like that of Mr Kumar is still able to find expression and secure reward. Mr Kumar is not a product of any fancy European design institute and yet he has come forward with an idea that will go down in history and make itself felt around the world.
Click to expand...

Congratulation to Prof. Uday Kumar and GoI for giving Rupee a new face.

About 2010 students gather in their school campus to form the new symbol of Indian Rupee In Chennai on Friday, July 16, 2010
T

Pointless pettifoggery.
I would rather they do something to stop the rampant double digit inflation that is causing salaries to evaporate like ice in a delhi summer.
You must log in or register to reply here.
Similar threads
India’s MAYA MALE UCAV and Eklavya Wingman UAS
INDIAN NATIONAL DEFENSE UNIVERSITY
Indian Army United Nations Peacekeeping: India's Blue Helmets
Arming the Afghan National Army - Its in Indian interest
Share:
Facebook Twitter Reddit WhatsApp Link