By:Ambassador (Retd.) Asoke Kumar Mukerji
India’s contributions to UN peacekeeping operations (UNPKOs)have been underscored by the experience and professionalism of India’s armed forces. Speaking at the September 2015 Leaders’ Summit in New York on UN Peacekeeping, Prime Minister Shri Narendra Modi had said:"The foundations of the United Nations were laid by the brave soldiers on the battlefields of the Second World War. By 1945, they included 2.5 million men of the Indian Army, the largest volunteer force in history.” India today is the largest contributor of troops to UNPKOs. More than 200,000 Indian troops have served in 49 of the 71 UNPKOs deployed so far.

As an "original” founder-member of the United Nations, India has not hesitated to respond to the calls of the UN to contribute troops for maintaining international peace and security. In 1950, soon after India’s independence, the 60 Parachute Field Ambulance of the Indian Army was sent to provide medical cover to U.S./R.O.K. and UN forces engaged in the Korean War. The unit served in Korea for a total of three and a half years (November 1950- May 1954), the longest single tenure by any military unit under the UN flag.

From 15 November 1956 to 19 May 1967, eleven infantry battalions from India served by rotation in the UN Emergency Force (UNEF 1) to ensure the withdrawal of France, U.K. and Israel from Egyptian territory and to sustain the peace between Israel and her Arab neighbours. 27 Indian UN peacekeepers lost their lives in this operation.

In 1960, the Congo requested for deployment of UN peacekeepers to counter secession and re-integrate the country after Belgian rule.Between 14 July 1960 and 30 June 1964, two Indian brigades participated in ONUC UNPKO. The rules of engagement were modified to cater for use of force in defence of the mandate, in carrying out humanitarian tasks, and in countering mercenaries. 39 Indian personnel lost their lives in the operation. Captain Gurbachan Singh Salaria became the only UN peacekeeper to receive the Param Vir Chakra, India’s highest military award, for laying down his life in defence of the UN mandate in the Congo.

India’s participation in the initial UNPKOs resulted in a growing pool of Indian military officers seconded to the UN whose professionalism and experience have contributed to UN peacekeeping doctrine. The contribution of Major-General I.J. Rikhye, appointed as the first Military Adviser to the UN Secretary General between 1960-1967, was seminal in this context.The three core principles of effective UN peacekeeping were identified based on the experience of UNPKOs on the ground. These are deployment with the consent of the parties, impartiality in operations, and non-use of force except in self-defence and defence of the mandate.

Subsequent contributions to UN peacekeeping doctrine by Indian military officers have built on this, both at UN Headquarters (where two Indian Generals have served as Military Advisers in recent years) and in the field (where 15 Indian Generals have acted as Force Commanders with distinction).

The first area is in making use of UN peacekeeping across the world to ensure a political transition to peace. Such UNPKOs include UNPROFOR in the former Yugoslavia, whose first Force Commander was India’s Lt. General Satish Nambiar; UNTAC in Cambodia; ONUSAL in El Salvador; ONUMOZ in Mozambique; UNOSOM in Somalia; UNAVEM in Angola; UNAMSIL in Sierra Leone; UNMEE in Ethiopia-Eritrea; and UNMIT in East Timor.

The second area is in augmenting peacebuilding activities by encouraging and mentoring the strengthening of national governance institutions. UNTAG saw Indian peacekeepers assist in the creation of the institutions of an independent Namibia. India became the first country to demonstrate the effectiveness of women as UN peacekeepersin peacebuilding with the deployment of the first all-female formed police unit (FFPU) to the UNPKO in Liberia (UNMIL) in 2007. When UNMIL was wound up in February 2018, President Sirleaf of Liberia commented: "The contribution you have made in inspiring Liberian women, imparting in them the spirit of professionalism and encouraging them to join operations that protect the nation, for that we will always be grateful.”

The third area is in leading the ground level response to new challenges, while the UN Security Council remains ineffective in implementing its decisions, due to reasons set out unanimously by world leaders at the 2005 UN World Summit which mandated reforms of the Security Council. The protection of civilians caught in intra-state conflicts is one issue where India’s UN peacekeepers have made a positive difference, especially in complex UNPKOs like MONUSCO in the Democratic Republic of Congo and UNMISS in South Sudan. Going beyond the call of duty, Indian UN peacekeepers have volunteered medical services, including veterinary support, and engineering services, in these UNPKOs, which has contributed to sustaining the livelihood of conflict-impacted local communities.

The challenges faced by India’s troops contributed to UNPKOs todayinclude terrorist threats to the UN by non-state actors. In UNDOF, deployed on the Golan Heights of Syria, Indian UN military officers were the first to confront such challenges by the Jabhat al-Nusra terrorist group which took UN peacekeepers hostage in 2014.

3802 troops from UN member-states have given their lives defending the UN Charter between 1948-2018. The highest number (164) are from India. India has launched a virtual wall of remembrance for her peacekeepers. The UN General Assembly has approved constructing a Memorial to all fallen UN peacekeepers. As Prime Minister Shri Narendra Modi has emphasized: "It would be most fitting if the proposed memorial wall to the fallen peacekeepers is created quickly.”


UNITED NATIONS: India in collaboration with the UN on Wednesday launched UNITE AWARE - a technology platform for peacekeeping missions aimed at providing terrain-related information to peacekeepers.
The launch came as India assumed the Presidency of the 15-nation UN Security Council for the month of August.
The project was launched in the presence of External Affairs Minister S Jaishankar here at the UN headquarters. 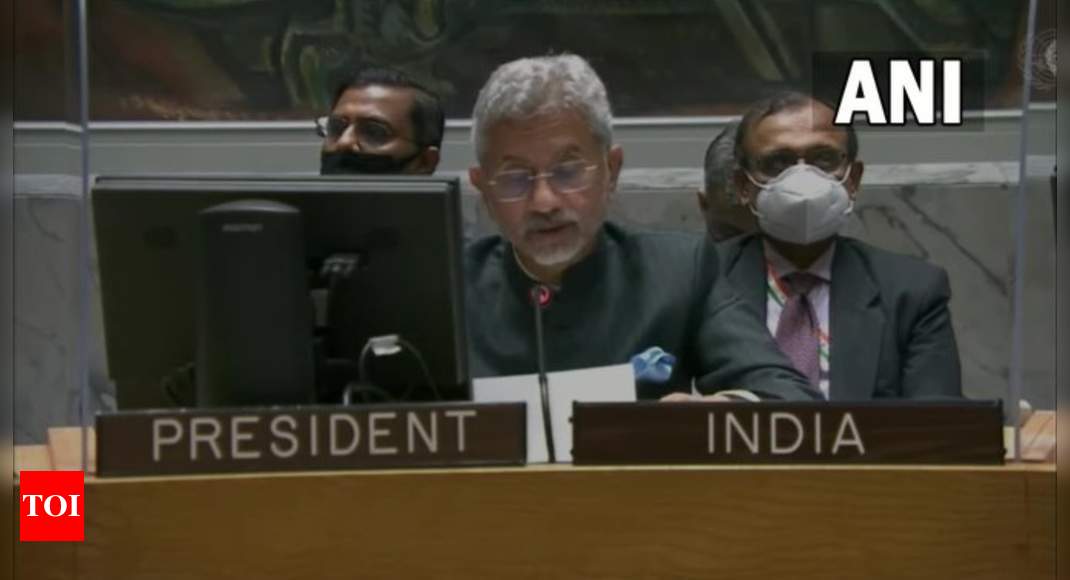 India News: India in collaboration with the UN on Wednesday launched UNITE AWARE - a technology platform for peacekeeping missions aimed at providing terrain-rela