Alappuzha: Coat Guard have seized a foreign vessel that crossed the border and entered Indian waters.


About 12 people, mostly Iranians and few Pakistan nationals, are said to be in the boat.


The vessel was intercepted 52 nautical mile off Alappuzha coast near Kareelakulangara area on late Saturday night. The boat was towed into the Vizhinjam port with the help of Coast Guard and Indian Navy on Sunday.


The occupants of the boat have been taken to Naval headquarters in Kochi for questioning.


Following RAW's warning that drugs and arms could be smuggled into the country, Coast Guard was conducting surveillance operations in the area when they came across the foreign vessel.

A suspect Irani vessel intercepted off Kerala. No doubt the recent force expansion of ICG and security focus on the coasts is yielding results.

On receipt of the information, a Dornier aircraft was deployed on surveillance sorties, while ships Samar and Abhinav also sailed from Kochi at maximum speed to carry out effective surveillance and interdict the suspect entity.

The aircraft, after prolonged area surveillance in rough weather conditions, sighted one suspicious contact around Saturday midnight and the ships shadowed the vessel "Barooki" , remaining out of visual range to avoid detection.

Before the break of dawn, a Coast Guard team of ICGS Samar boarded the suspected vessel and took control of it and its 12 crew members. A search resulted in seizure of a Thuraya satellite communication set and a Pakistani identity card.

The boat, which had sailed from Iran on May 25, was then escorted to Vizhinjam harbour and it and its crew handed over to Kerala Police who have started a joint interrogation along with central agencies.
Click to expand...

Pictures of the incident. ICGS Abhinav is one of the Fast Patrol Vessels being manufactured at the Cochin SY 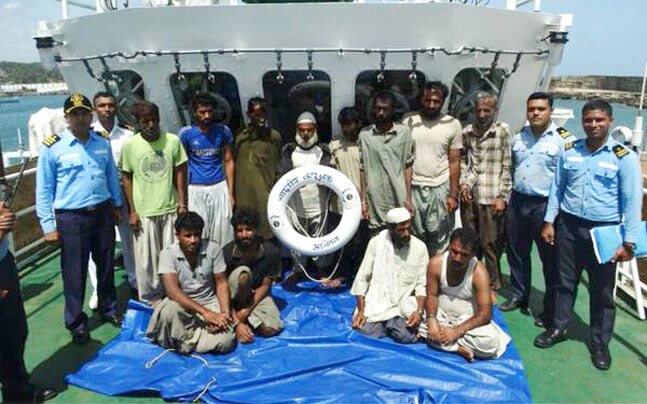 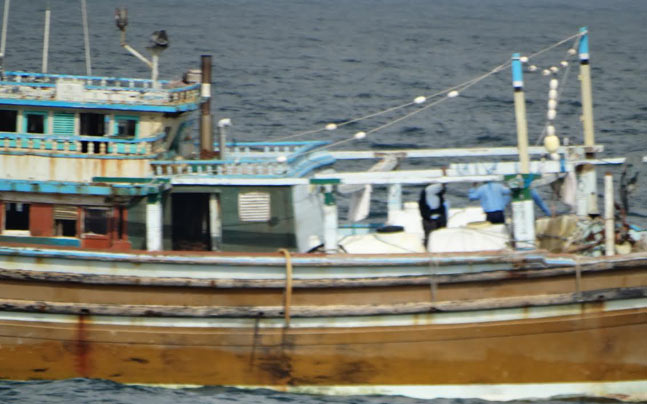 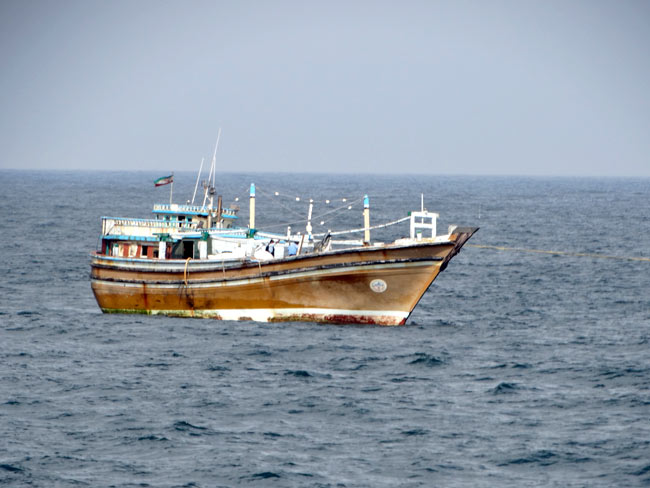 isnt this thread the same as this :

The ship is named after Rani Durgavati who was the Gond queen. She was the wife of Daalpat Shah and was famous for defeating the army of Baz Bahadur and bravely fighting against the Mughal Army.The 51 mtr inshore patrol vessel, ICGS Rani Durgavati, the third of its class has been designed and built indigenously by M/s Hindustan Shipyard Limited. The ship, is equipped with the most advanced and sophisticated navigational and communication sensors and equipment. The ship is propelled by three MTU 4000 series diesel engine of 2720 kw capacity at 2100 rpm each coupled with three 71S2 Rolls Royce Kamewa jets to a maximum speed of 34 knots. At economical speed of 14 knots it has an endurance of 1500 nautical miles. The special features of the ship include an Integrated Bridge System (IBS), Integrated Machinery Control Systems (IMCS) , and an indigenously built gun mount with fire control systems. The ship is designed to carry one rigid inflatable boat and two Geminis for search and rescue, law enforcement and maritime patrol. ICGS “Rani Durgavati” is manned by 05 officers and 34 men and is commanded by Commandant S Zakir Hussain. The ship will be based at Karaikal under the administrative and operation control of the commander, Coast Guard Region (East). The ship on joining the Coast Guard fleet will enhance Coast Guard’s capability in furthering its, mandate of maritime safety, maritime security, environmental protection and coastal security on the eastern sea board. (Source: MoD)
N

CHENNAI: The flight data recorder of the Coast Guard Dornier 791 was recovered from the Bay of Bengal off Chidambaram coast in Tamil Nadu, 33 days after the aircraft went missing. Officials said the flight data recorder had been recovered from a depth of 950 meters by ROV Olympic Canyon, a ship owned by Reliance. They said search was on for the wreckage of the aircraft and three crew members. 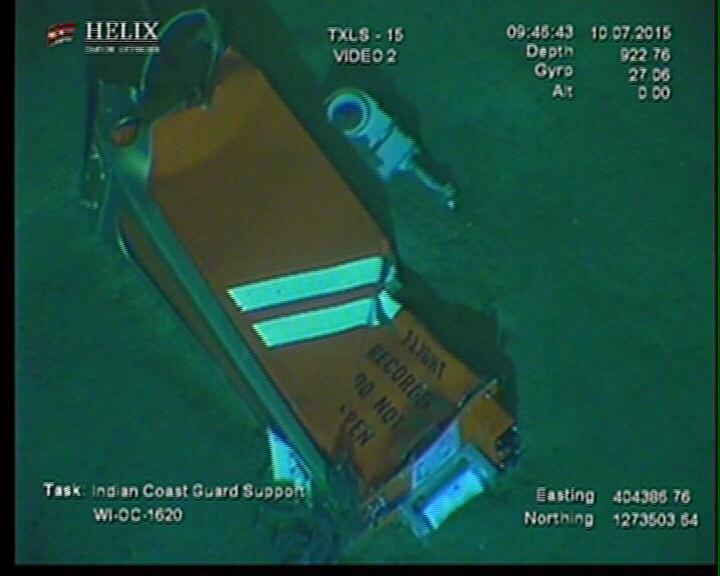 Photo of the recovered Flight Data Recorder (FDR) of the crashed aircraft in the Bay of Bengal. (Source: MoD) 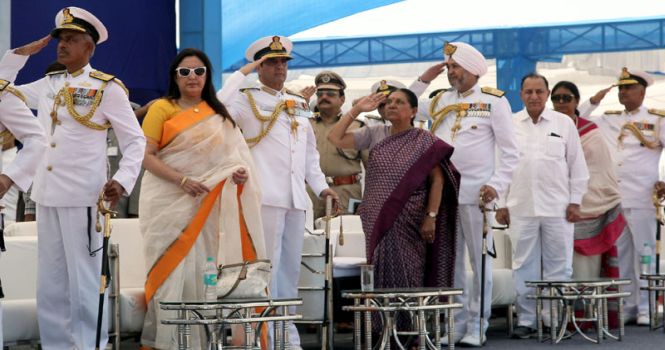 In view of growing threats from the Pakistani side and constant skirmishes in the high sea, the Indian Navy has repositioned its top officers in Gujarat. A new post of Flag Officer Commanding Gujarat Naval Area (FOGNA) has been created by splitting the post of Flag Officer Maharashtra and Gujarat to give special impetus to Gujarat, which has the largest coastline of 880 NM in the country.


On Thursday, Rear Admiral MS Pawar was appointed as the first Flag Officer of FOGNA. The Flag Officer will sit in Ahmedabad while his Commodore will be based in INS Sardar Patel, India’s latest Naval establishment in Porbandar. INS Sardar Patel was commissioned in May this year.


Given Gujarat’s proximity to Pakistan, the need for carving out a new post for the State was felt post 26/11 Mumbai terror attack in 2008 for increasing vigilance and better co-ordination and response at times of threat. Moreover, the State being a maritime hub due to high commercial activities taking place — majority of crude oil lands at Gujarat ports — positioning of a top officer will only give impetus to India’s thrust on Blue Economy. Besides, with the ship building industries setting up their bases in Gujarat and new ports coming in, there was a need felt to create a new billet in Gujarat. There will be a major Naval infrastructure coming up in Ahmedabad and Porbandar with about 300 housing dwellings for the Indian Navy staff and other projects.


Meanwhile, there were few other prominent changes in the top ranks of the Indian Navy on Friday. Rear Admiral Sanjay Mahindru took over as Flag Officer Submarines from Rear Admiral SV Bokhare. Commissioned on January 1, 1985 Mahindru has served 27 years in the Submarine Arm. He has commanded a conventional submarine, frigate and a destroyer prior assuming Command of nuclear submarine Arihant. Whilst serving ashore, the officer commanded the Navy’s Submarine Training Establishment and been a Director at Naval Headquarters. He is an alumnus of prestigious College of Naval Warfare and has also completed the Staff Course in the United Kingdom. 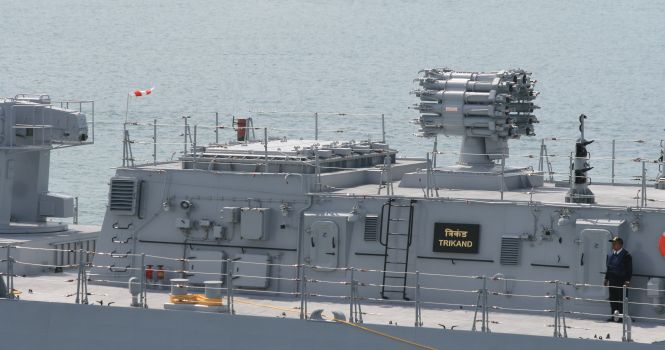 In continuation of Indian Navy’s overseas deployment to West Asia, Africa and Europe, INS Trikand entered Toulon today for a three day visit. The ship will engage extensively with the French Navy during its stay in the country. Apart from professional interaction, a number of sports and social engagements are also planned, which would go a long way in enhancing cooperation and understanding towards mutually beneficial issues of maritime interest. The Indian and French Navies routinely undertake bilateral maritime exercises known as VARUNA which is the fulcrum of maritime engagement between the two navies.

Indian naval assets are regularly deployed as part of the Indian Navy’s mission of building ‘Bridges of Friendship’ and strengthening international cooperation with friendly countries as well as to address maritime concerns of the region including piracy in the Gulf of Aden.

Relations between India and France have traditionally been close and friendly. With the establishment of the strategic partnership in 1998, there has been significant progress in all areas of bilateral co-operation including defence, nuclear energy and space. Both countries conduct a high-level annual exercise code-named ‘Varuna’, the last edition of which was conducted off Goa this year with the participation of the French aircraft carrier, Charles De Gaulle. India and France are also collaborating in the Scorpene submarine programme, under which six submarines are being built in India with French assistance.

INS Trikand, commanded by Captain Vinay Kalia, is a state-of-the-art warship of the Indian Navy equipped with a versatile range of weapons and sensors capable of addressing threats in all the three dimensions – air, surface and sub-surface. The visiting ship is part of the Indian Navy’s Western Fleet and is under the operational command of the Flag Officer Commanding-in-Chief, Western Naval Command, with its Headquarters at Mumbai.
Press Information Bureau
http://www.indiandefensenews.in/2015/09/visit-of-ins-trikand-to-toulon-france.html

Our ship building centers have matured....result is this .hope HAL follows these steps

Trikand was built in Russia. Sahayadri is far more advanced than this.

Kolkata, Oct 15 (PTI) Fast patrol vessel 'ICGS Anmol' was commissioned by the Indian Coast Guard today. 'ICGS Anmol' is the 13th in the series of 20 fast patrol vessels being designed and built by the Cochin Shipyard. The 50-metre-long ship is capable of achieving speeds in excess of 35 knots and has an endurance of 1,500 nautical miles with economical speed of 13 knots. It is equipped with state-of-the- art weaponry and advanced navigational and communication equipment and 40/60 Bofors anti- aircraft gun as the main armament. "The role of the Coast Guard is becoming crucial day by day because of recent strategic developments in China and adjacent countries. With the upcoming Sagarmala project of the Government of India, the responsibility of the service towards safeguarding coastal frontiers will become pivotal in the coming years," West Bengal Governor K N Tripathi said at the commissioning ceremony. Coast Guard officials said the new vessel will be based at Haldia in West Bengal and will enhance their operational capabilities to undertake multifarious tasks such as surveillance, interdiction, search and rescue and medical evacuations of the region. Presently Coast Guard district Headquarter Haldia has a compliment of two in-shore patrol vessels, four hovercrafts and one interceptor boat.

Kochi, Nov 03 (ANI): Indian Coast Guard commissioned ICGS Arinjay, 15th in the series of 20 Fast Patrol Vessels, in Kochi city, at the Southern Naval Command. ICGS (Indian Coast Guard Ship) Arinjay, which means ‘victory over evil’, is 50-meter long, displaces 317 tons of water and has a maximum designed speed of 33 knots. The ship has an endurance of 1500 nautical miles at an economical speed of 13 Knots. ICGS Arinjay was commissioned by Flag Officer, Commanding-in-Chief, Southern Naval Command, Vice Admiral Sunil Lanba. Lanba, in his address during the commissioning ceremony, also pointed out that Indian navy and coast guard were working together to provide maritime security to the nation. Commandant Ajay Kumar Mudgul would be the Commanding Officer of ICGS Arinjay.
Indian coast guard commissions ICGS Arinjay at Southern Naval Base

Panaji, Nov. 10 (ANI): Promoting the government's 'Make in India' initiative, Defence Minister Manohar Parrikar on Tuesday said that the shipyards and major producers should become integrators and take assistance of the local industries. "The shipyards and major producers should become integrators and they should take assistance of the local industries which have enough capability. Small and medium size industries in India do wonderful job, they have innovation left in them. Coast Guard as well as Navy will come to its promise," Parrikar said at the inauguration of 'ICGS Samarth' here. "I congratulate Goa Shipyard Limited for doing excellent work. Goa shipyard is closely but surely showing a way of timely delivery," he added. Indian Coast Guard Ship Samarth, the first in the series of six 105m off shore patrol vessels (OPVs), was commissioned by the Defence Minister in the presence of HCS Bisht, AVSM, Director General Indian Coast Guard; Shekhar Mittal (Retd.) CMD, Goa Shipyard Limited; and other senior dignitaries of the Centre and state government. The ship has been built based on an in-house design and under the supervision of the coast guard headquarters and the local coast guard base. ICGS Samarth will be the biggest ship to join the coast guard fleet. (ANI)

One L&T interceptor has been transferred from ICG to Seychelles 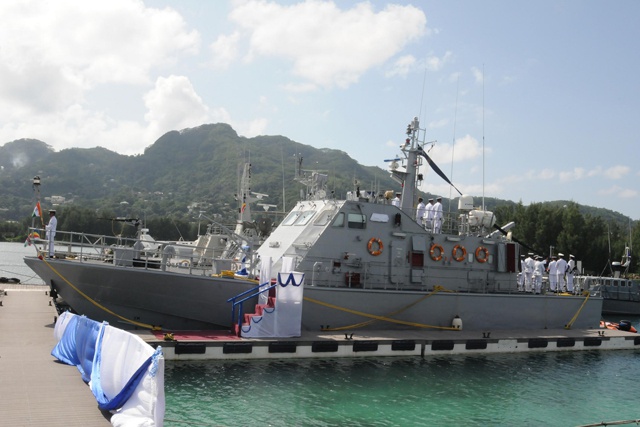