Some of the best soldiers of India fighting against Pakistani terrorism in Kashmir. Most of them headed the Much feared SOG in their prime. A look into their "daily routine"

Om shanti to our bravehearts who lost lives against Pakistani Jihaad.

I think our armed forces should now start taking out infrastructure from the Paki side as part of our action/reaction.
The singular focus on just military & militant infrastructure must go.

The calculation should be on return on investment. The Pakis have for long imposed an excessive cost from us by sending their unwashed abduls with cheap guns and simple training. Our responses should extract multiples of that cost, if not atleast equivalent cost from the Pakis.
By ROI, I am not just talking of money.
It is
1) People (already being done)
2) Cost (not being done)
3) Standard/Ease of living on the other side(not being done)

aarav said:
Let's be clear RR works only in hinterland & the policing role has been delegated to CRPF back in the days it was to BSF ,BSF was also engaging with the enemy on its own ,BSF on its own finished Ghazi Baba the JeM chief of kashmir ,it also finished the AL Badr top leadership
Click to expand...

Policing role ? And what does policing constitute ?

About killings 0 better do not make false claims.

but then HM decided that BSF primary role of border security was getting affected especially in Eastern border hence CRPF was deployed,
Click to expand...

HM does not decide that. It was Kargil Committee report that recommended one police force to be given one role and CRPF has been made as "Internal Security" force growing from hundred to three hundred battalions. twenty more DIGs, so many IGs , so many hi tech weapons etc ? But where is "Internal Security"? That is still elusive even after tweny years of Cabinet Committee accepting to give all goodies to CRPF ?

there was a viral video some years back where a CRPF jawan was beaten by a KM this in unexpected that such a thing would happen to Army or BSf trooper but there seems to be lack of enthusiasm ,how could a man just walk up to you and down 3 buddies ,it is because top leadership of CRPF has no clear thinking & so called human rights issue has taken over the top leadership hence these facade of CRPF madad ,Unless & Until you give pain to the colluding local populace there won't be deterrent and eliminating a large number is a sure shot deterrent .
Click to expand...

Those are "policing hezards" and being "Internal Security" force? why cry about it ? Train well and fight well ? CRPF has been given every thing possible.

Indx TechStyle said:
Title proposed if thread is kept:
Conflicts or Engagements or Battles along LOC, LAC and International borders

Titles proposed if thread is to be split into forks:
Conflicts or Engagements or Battles along LOC and Indo Pakistan border

Conflicts or Engagements or Battles along LAC and Indo China border

Let me know if anyone has anything else in mind. I'll be on again in few minutes.
Click to expand...

We have three distinct border areas as pointed out above 0 LAC, LC Na IB, All three require different treatment as situations, threats, activities and GoI management policies for all three is distinct and vastly differ from each other.

LC Sector is characterised by LC Management plus anti infiltration operations and then hinterland anti terrorist opeartions are closely linked with both.

Baba ji, is there any feature that would auto watch new threads which are created as alternative to closed threads?
Discovering new ones can be a pain.

I must thank you Lurker Baba ...

indiatester said:
Baba ji, is there any feature that would auto watch new threads which are created as alternative to closed threads?
Discovering new ones can be a pain.
Click to expand...

In J&K, 13 militants eliminated in April so far

Despite Covid-19 lockdown, there has been no let up in anti-terror operations of the security forces, especially of the army, across Jammu and Kashmir.

At least 13 terrorists have been eliminated in April so far.

in that case this can be a sticky!
lets use the existing feature as work around so that members take notice of it

sorcerer said:
In J&K, 13 militants eliminated in April so far

Despite Covid-19 lockdown, there has been no let up in anti-terror operations of the security forces, especially of the army, across Jammu and Kashmir.

At least 13 terrorists have been eliminated in April so far.
Click to expand...

It should have been expected...
Pakistani Terrorist are well known to exploit all adverse conditions and situation in order to infiltrate, carry out movements and strikes such as heavy rains or heavy snow fall, extreme cold, difficult terrain etc... For them it is question of life and death ... IA guns is greater danger than any other source of death...

Bhadra said:
It should have been expected...
Pakistani Terrorist are well known to exploit all adverse conditions and situation in order to infiltrate, carry out movements and strikes such as heavy rains or heavy snow fall, extreme cold, difficult terrain etc... For them it is question of life and death ... IA guns is greater danger than any other source of death...
Click to expand...

2 terrorist associates of JeM apprehended in Shopian
Read more At:

Hmm I been thinking about this for quite a while
@Bhadra @Mikesingh who carries out the Shelling, artillery fire and retaliation during ceasefire breach?
It is a job of BSF not army right?

In gerneral what is a BSF soldier suppose to do at the borders?- Patrolling, Uncovering landmines, observation, finding terrorist entry route and sealing them?
And what is the dynamic of Indian Army and BSF? How do they collaborate with each other on the field.
I've seen some borders posts manned by Indian Army jawans in some critical areas, is this the case in all of Kashmir borders or some specific area. 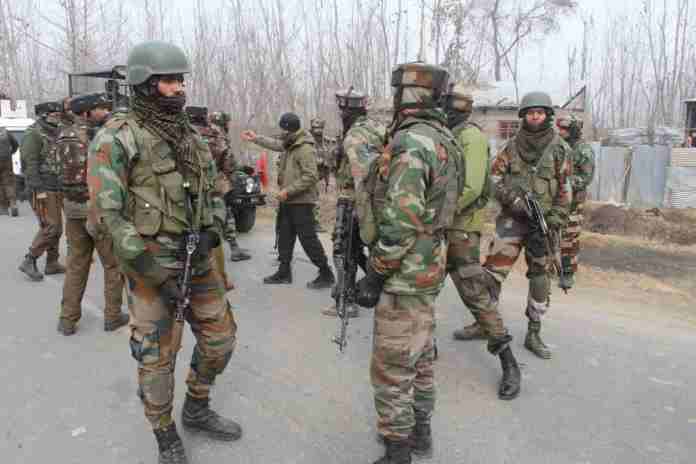 Srinagar: Two more militants were killed taking toll to four after a gunfight broke out between militants and goverment forces at Melhora village of south Kashmir’s Shopian district on Tuesday.

Official sources told that two more militant bodies have been found at encounter site, he further said that their identification is yet to ascertained.

As per the sources all four militants killed in encounter are believed to be from Ansar Gazwatul Hind and one among them said to be top Commander.

Earlier Reports reaching said that a joint team of army’s 55 RR, Police Shopian and CRPF laid a siege at Melhora village late Tuesday evening.
A police officer said that the operation was launched following inputs about the presence of some militants.

He said that the exchange of fire took place in the area soon after the joint team fired some warning shots towards the suspected spot.

The militants tried to break the cordon amid the exchange of fire, however, the joint team engage the militants in the gunfight.(GNS)
You must log in or register to reply here.
Similar threads
Pakistan Accuses India of shifting conflict to sub conventional level
US Calls For Improvement in India-Pakistan Ties, Says A Conflict Could Spark Nuclear War
The Root Of India-Pakistan Conflicts
US fears terrorists might provoke India, Pakistan conflict
Share:
Facebook Twitter Reddit WhatsApp Link