India Has Designs on Toy Manufacturing

India Has Designs on Toy Manufacturing
Suppliers seek out new opportunities as labor costs rise in China; from farms to factories 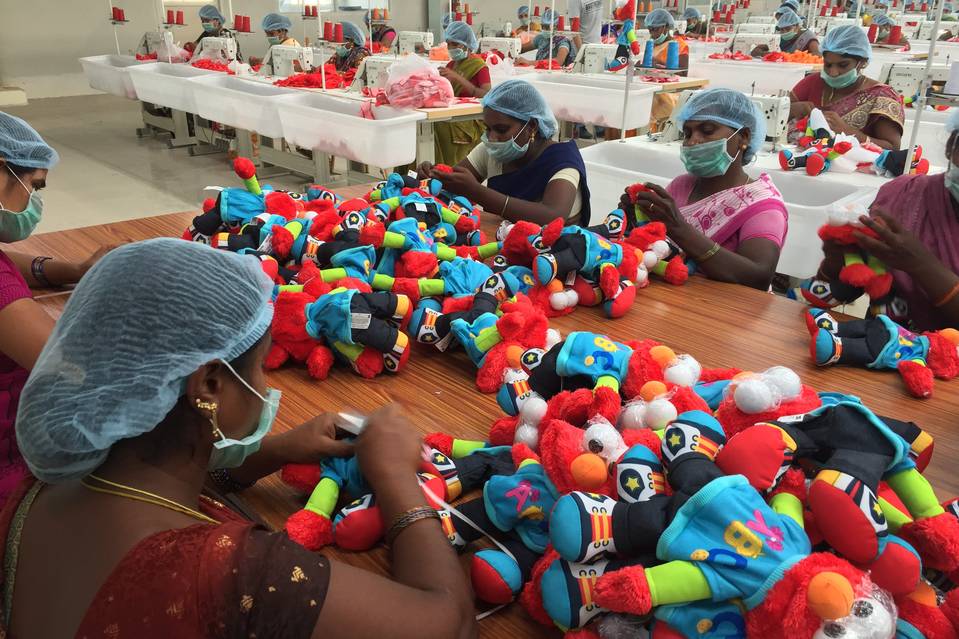 KAKINADA, India—Entrepreneur Ajay Sinha made stuffed toys in China for a decade before he started doing something almost unheard-of in his industry: manufacture in his native India.

As rising wages push production of T-shirts, sneakers and teddy bears out of China, countries with lower labor costs and proximity to Chinese supply chains, such as Vietnam and Cambodia, have picked up much of that business. But India, with its enormous pool of workers willing to sew and operate machinery for even less compensation, is trying to establish itself as a contender.

Labor-intensive manufacturing represented the first rung on the ladder of industrial development for a host of Asian countries. That makes the success of companies like Mr. Sinha’s a bellwether of India’s potential to raise millions of people out of destitution like those nations did: by luring them off small farms and into steady if low-skilled factory work.

In the world’s second-most-populous country, manufacturing wages today are less than half China’s, after adjusting for productivity: $5.36 an hour compared with $14.60, according to Boston Consulting Group. Labor will be abundant and wage-growth stable, some factory owners reckon, for more than a decade.

Whether that is enough to offset other shortcomings that have stymied India’s rise as an export power—including roads and ports that badly need upgrading, power cuts and cumbersome bureaucracy—remains to be seen.

China won’t be the world’s toy workshop forever, said Mr. Sinha, president of Pals Plush Ltd. “The kind of labor we need, for the next 15 years there’s nowhere to beat India.”

Pals Plush’s new plant is in a 16-square-mile special economic zone in Kakinada, on India’s southeastern coast, where exporters enjoy incentives from the federal and state governments, including tax-free imports of materials.

The factory’s 500 workers, all of them women from nearby farming villages, earn monthly salaries and benefits valued at around $100, or around a third, per hour, of what Pals Plush pays in China. Many of the women said they had never held a formal job before, and that factory work was a way to achieve financial independence.

Heads of several China-based toy makers who came to scout Kakinada recently said they had high hopes despite the unfamiliar environment. The businessmen snapped photos of monkeys scampering up buildings and of garbage in the streets.

Leo Cheng of Wing Fat Paper Box Co., a Hong Kong-based producer of board games, stationery and electronics, said setting up in India would be little different from his experience, 30 years ago, expanding into mainland China. Factory technology and know-how were just as scarce. “They had workers, nothing else.”

John Leung, chairman of GFT Group Ltd., a manufacturer of Transformers, “Star Wars” and other toys for Hasbro that is based in China’s Guangdong province, said he plans to start producing soon from a rented factory in Chennai.

Eight years ago, GFT shifted much of its production from China to Vietnam, where today the company’s workers earn around $215 a month, less than Chinese counterparts’ salaries. But Vietnam is quickly becoming saturated with factories, Mr. Leung said.

“In the next eight to 10 years, Vietnam will be finished,” he said. He said Hasbro, based in Pawtucket, R.I., had urged him to set up shop in India.

Though his Chennai workers’ monthly wages will be around $110 each, Mr. Leung said he doesn’t expect to turn a profit in India for at least three years, given the costs of training workers and importing raw materials.

Getting an Indian business license has been a laborious, monthslong process, Mr. Leung added. “They make it very difficult.”

Julie Duffy, a Hasbro spokeswoman, said although Hasbro has begun sourcing from India, Vietnam, Indonesia and other countries, “We expect that China will continue to be where the vast majority of our product is manufactured in the foreseeable future.”

Mr. Sinha of Pals Plush grew up near New Delhi and set up his first toy factory close to the capital in 1995. But it was costly and slow to import all his materials through Mumbai. Heavy rains could bring rail lines to a halt. Customs and other procedures were burdensome.

After five years, he said, “I was totally defeated.”

He moved to the eastern Chinese city of Hangzhou, where his factories have produced soft toys for Walt Disney Co., Wal-Mart Stores Inc., Williams-Sonoma Inc. and others.

But in 2010, Mr. Sinha found himself with a large Christmas order for Disney and not enough manpower to fill it. He said he “paid through the nose” to bus in temporary workers. In China, “aspirations have changed,” he said. “Nobody wants to be on a sewing machine anymore.”

He started looking elsewhere. He ruled out Sri Lanka, which was still recovering from its decadeslong civil war. He was wary of political instability and natural disasters in Bangladesh. Labor and construction costs were low in Cambodia, but he worried about corruption. He ended up buying land in Sri City, an industrial estate in India’s Andhra Pradesh state.

India’s infrastructure is better than it was 20 years ago, Mr. Sinha said, and more government clearances are computerized. After two years manufacturing for Disney in Sri City, he signed a deal with Hasbro and built the Kakinada factory.

“People’s way of thinking here—it’s opposite to ours,” said Chen Xiaolin, originally from Sichuan province, as he watched workers milling about and listening to instructions at the end of a shift. “If it were us having a meeting, we’d line up neatly.”

India’s lower labor costs mean that even though Mr. Sinha needs to import all of the specialized fabrics he uses and his Indian workers are less productive than Chinese ones, he can still afford to offer buyers a discount on his India-made toys—and keep the same profit margin, he said.

Still, patriotism played a role in his decision to move his business back to India. “This is our country, above all.”

this is an area in which will not generate a very huge revenue but it will it will generate a huge employment and earn brad and butters to millions.

Chinese started their industry with toy manufacturing .. 25 years back

...and 25 years later they are still making toys. Only bigger ones.

Sounds pretty good. Govt. must arrange loans for starting businesses and will have reduce pressure on plastic manufacturing.
We must make good looking and quality specially electronic toys as these are exported to whole world.
Wishing that we could provide quality, not like those chinky toys who stop working in a minute.
J

Well Funriders Leisure & Amusement too manufacture FRP toys, soft toys, Indoor playground toys etc. User customized design of play area is the point of attraction. Each play area and toys are designed and manufactured according to the client needs. Our website http://www.softplayindia.com/product/ provides all information regarding the manufacturing and delivery process.
You must log in or register to reply here.
Similar threads
India will never buy Russian Su35 or Mig 35 as India has already developed those technologies
The Print: As India returns to positive growth, it must think why it can’t remove poverty like China has
India has to consider its security policy more seriously
About Which Mother of all Nuclear bomb Modi is talking about? Has India got MT capability now ?
Share:
Facebook Twitter Reddit WhatsApp Link