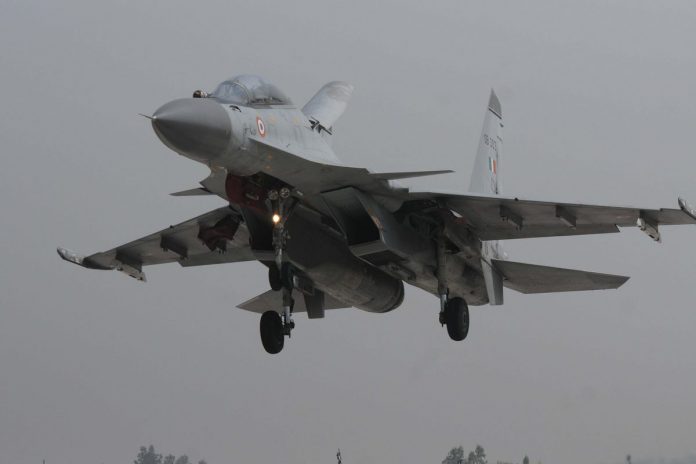 A Sukhoi Su-30MKI makes touchdown on the Lucknow-Agra Expressway | Photo by Subhankar Chakraborty/Hindustan Times via Getty Images
A Sukhoi-30 fired a Brahmos missile to national applause and defence minister Nirmala Sitharaman hailed it as a world record. An inside story of how the IAF’s Su-30 dream would have crashed before take-off but for the sagacity of Narasimha Rao, Atal Bihari Vajpayee, Jaswant Singh and the most unlikely, Mulayam.

This is a story from the summer of 1996. Some of you might remember (and the rest can Google) how a little controversy had started to build in the last days of the Narasimha Rao government when, with the election campaign in full swing, the Sukhoi-30 deal was signed with the Russians and, The Indian Express broke the story. There were immediate protests from the BJP. Rao’s was after all a caretaker government with the Election Commission’s model code in force.

There were dark insinuations, as it is usual with all defence deals: was Rao in a hurry to collect hundreds of crores for his campaign?

Then, surprisingly, the BJP stepped back. Because the facts were absolutely to the contrary. Somebody did indeed want money from the Sukhoi deal, but it wasn’t Rao.

Two weeks before the first round of the 1996 elections, I got a call one morning from Jaswant Singh to talk about the Sukhoi story.

What did I think about the deal, he asked. Did I suspect there was a scam, like Bofors? I told him I had heard no such thing and that my friends in the IAF thought this was a great aircraft. He then asked me if I would see Mr Vajpayee (then leader of the opposition) to talk more about this.

The same afternoon, I got a call from Vajpayee’s home to see him at breakfast the next morning. Vajpayee was lovingly and generously buttering a crisp toast and feeding it in small pieces to his favourite Pomeranian, while exploring the possibility of a campaign-time bonanza of a scandal bigger than Bofors.

His question, briefly, was as follows. The lame-duck Congress government had sealed the deal in its last days in an unseemly hurry. It was also his ‘information’ that the government had paid an advance of around $350 million to the Russians without any final price settlement. Why such an unusual rush? Did the Congress want to collect a kickback in the last, cash-and-carry phase of its government?

He said he had heard that the Express knew more about this, or if not, could I have it looked at more closely? He said his apprehension was that “if it is a good plane, unsubstantiated talk of a scam should not scuttle the deal”. At the same time, knowing the ways of the Rao government, and circumstantial evidence in the case, you naturally suspected a kickback.

We checked out our usual sources and suspects and it did not seem that the decision, though hasty, was mala fide. The BJP too kept quiet, Rao’s Congress was defeated anyway, and Vajpayee’s coalition government was sworn in, although the first time it lasted only 13 days.

It was towards the last couple of days of that government that Jaswant Singh called me to chat on the sidelines of a public function. “That Sukhoi story,” he said, “is actually nothing.” Having been in government now, they had been able to look at the files and it was a clean deal and the haste, if any, was in a larger national interest, so it would be better to forget all about it. He wouldn’t tell me what that ‘larger’ national interest was.

The scene now shifts to the IAF mess on New Delhi’s Zakir Hussain Marg, a few months later, and we pick up the thread of that Sukhoi story again. Now H.D. Deve Gowda’s coalition was in power and Mulayam Singh Yadav was the defence minister. His ministry had organised a dinner for him to meet senior editors at the IAF’s showpiece mess in Delhi. Mulayam’s defence ministry had just finalised the full Sukhoi order. I stole a discreet moment to ask him if he had looked at the Sukhoi deal closely, because it was signed by Rao in such haste, there was a large, arbitrary advance involved, and because the top leaders of the BJP were at one stage suspicious about it.

“I know, I know, Jaswantji and Atalji had brought this up with me,” he said. Then he went on to describe in detail how, before the final, full deal was signed, he had actually invited Vajpayee and Jaswant to South Block to have a detailed presentation on the deal given to them. He said they had suggested changes in the deal documentation, including the provision of a sovereign guarantee from the Russian government that no kickbacks were paid and, should any be discovered any time in future, they would reimburse the amount to the Government of India.

Then, Mulayam said with a lot of delight: “They came to my office, we settled everything, but you people never found anything out.”

That conversation ended with Mulayam telling me triumphantly, and repeatedly, “Dekha, media phail ho gaya (see, the media failed to find out).”

We had failed, alright, to break a marvellous story, of how arch-rivals Mulayam and the BJP had actually exchanged notes on such a sensitive issue behind closed doors. Though late, it was still a great story, I thought, and so asked the redoubtable Ritu Sarin, the head of the Express investigative bureau, to find out more.

Sure enough, she landed up at Jaswant Singh’s office to check. At which point I once again got an invitation to Vajpayee’s house. This time, the point was simple. Could the Express avoid this story please? Because if it was published, it might hamper “our ability to communicate across party lines even on issues of such sensitivity and national interest”. These are days of bitter, ideological politics, but governing India is serious business, he said, or something to that effect.

Now, the mystery of what exactly that ‘larger’ national interest was that had led to such haste and a large advance payment in the last days of the Rao government. It seems that Boris Yeltsin had told Rao that he too was heading for elections, that the Sukhoi factory happened to be in his constituency, was too broke to pay salaries to its staff and if India could pay it that advance, salaries would be paid. It would work like magic in his election campaign.

That advance was, therefore, a political deal between the big boys, to be adjusted in the final pricing later. It was a conscious, diplomatic decision, cleared by Rao, and executed by none else than the then finance minister, Manmohan Singh.

Rao took an incredibly bold decision (given the Bofors background) which the BJP, locked in a bitter electoral battle with him, was suspicious of, but did not make an issue of, in the national interest.

When the BJP found the real reason (the Yeltsin request) they kept quiet — they in fact said Rao’s government had handled it masterfully. Then Mulayam Singh, whose entire politics is based on anti-BJPism, was large-hearted enough to open the files to its leaders and take their advice, again in the national interest.

In one story, therefore, you had the top leadership of all three major political groups — bitter enemies — involved. Yet they talked, shared confidences, and did the right thing by their nation. Now compare that with the lack of communication, even social graces, the general antagonism in our politics through this past month, and you know why that Sukhoi story is so relevant, and worthy of recall.

@BON PLAN A glimpse of what I was saying about the single vendor Mirage 2000 situation.

Gone are the days when all the parties seeing national interests would graciously retract on opposing an issue.

BJP has shown grace on many occasions and has been guilty of giving lengthy rope to Congress-I. For last 3 odd years congress-I has been high on rhetoric every day, inventing new lame accusations, cribbing on ideologies shallow on facts, renting a cause to discredit this government.

The so called Rafale Deal scam is one more example where gross obfuscation is paddled by hired bots on Social media and fringe MSM like NDTV.

The grace BJP showed sitting in opposition for many decades with patience and perseverance has not been replicated by sore losers of Congress-I and its natural allies like AAP TMC etc.

Narsimha Roa was ocean full of wisdom and strategic acumen who not only helped resolved insurgency in Punjab but gave positive direction to crumbling economy as well kept tab on ever changing security paradigm. Sukhoi-30 deal was one of his great decisions that kept the balance in our favour till today.

Mulayam Singh who got relegated from national scene due to stupidity of getting support from Congress-I than strengthening the 3rd front who then got back stabbed by Congress-I and further how he reduced to UP's local politics of vote bank was no less a nationalist who remained gracious to work along opposition.

At the end Sukhoi-30 remained insulated from controversies and became work horse; at the service of motherland.

@hit&run What really surprised me about this was the difference between Mulayam Singh's persona.

His entire politics revolved around Muslim appeasement and opposition to Ram Mandir but I never knew there was more to this guy.

MKI is the single best thing to have happened to IAF in 70 years. Had it been mired in petty politics, IAF would have found itself in a lot more messed up situation than it is already in.
You must log in or register to reply here.
Similar threads
Four Indian-Americans honoured with Great Immigrants Award
The Great Indian Laugh Riot
The Great Indian Nuclear Submarine Saga
Indian Army bailed out British Empire during Great War: Jody East
Share:
Facebook Twitter Reddit WhatsApp Link