Published by Waleed Fakhroo on October 11, 2009


A zoo in Gaza has dyed two donkeys to look like zebras.

The AP reports that the menagerie’s two original zebras died during the Israel-Hamas war, but they were too expensive to replace .

Instead, the keepers of ( Marah Land zoo ) decided to paint the donkeys with black and white patterns. A professional painter used hair colouring to dye the animals.

A genuine zebra would have been too expensive to bring into Israel-blockaded Gaza via smuggling tunnels under the border with Egypt, said owner Mohammed Bargouthi. “It would have cost me $40,000 to get a real one.

Children seemed delighted by the new additions and happily played with them. The children don’t know, so they call them zebras and they are happy to see something new Mohammed BargouthiOwner, Marah Land zoo

Bargouthi’s zoo charged an entrance fee of just $15 for a full busload of children.

Ramat Gan Mayor Tzvi Bar announced that he was “shocked to read the story,” adding that “it is an abuse of helpless animals.” The mayor called the Ramat Gan Safari director and asked him to send two zebras to the Gaza zoo in hopes it will prevent similar occurrences in the future.
As well as the donkeys, the zoo is also home to a tigress, two monkeys, and some birds, rabbits and cats.
Click to expand... 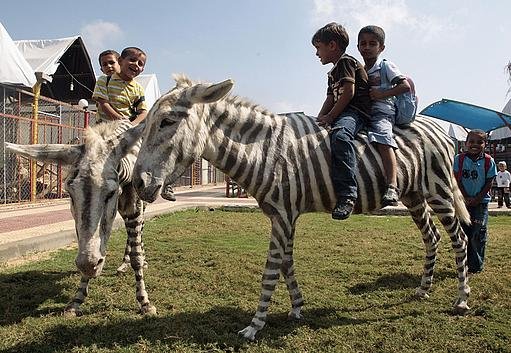 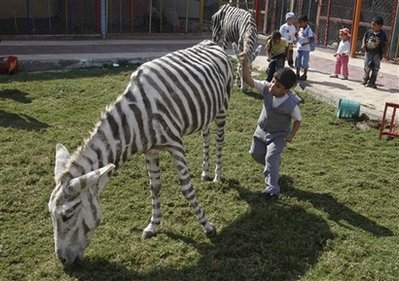 yxaxa! That is just pathetic. I don't know to feel bad against Israel for making it come to this, or the owners for actually doing it.