We will sneak in after the last tourist has left. Hidden in the red sandstone galleries, behind a pillar, we will try to catch a glimpse of ghostly dancers moving sinuously to the strains of heavenly music in the cool moonlight, or maybe listen to the strains of a raga wafting in the breeze. This is what my daughter and myself have decided to do on our next visit to Jodha Bai's palace at Fatehpur Sikri.

After a hectic tour of monuments dedicated to the dead in and around Delhi, Jodha Bai's palace and the buildings around it were a welcome relief. The complex of red sandstone buildings looked as if it were waiting to come to life — during the long, deserted hours of the night, when the inhabitants could come out undisturbed by the sightseers. (Click here to view photo feature) 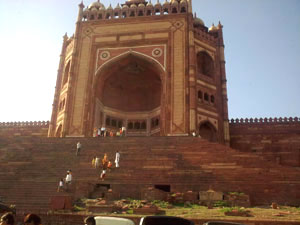 The grand buland darwaza, the entrance to the Jama Masjid at Fatehpur Sikri

The palace is a part of a city built by the Mughal emperor Akbar. The emperor, worried about the future of the Mughal lineage after the loss of twin children, consulted the Sufi saint Salim Chisti while returning from a campaign. The holy man assured him that he would have a son soon. A son was born to Akbar and was named Salim (the future Emperor Jahangir) in the saint's honour. Ecstatic at his son's birth, Akbar built a city at Sikri where the saint resided and named it Fatehabad (fateh meaning victory), which is the present day Fatehpur Sikri.

The majestic main fort, with the Jama Masjid, one of the largest mosques in India, the tomb of saint Salim Chisti, the grand buland darwaza (great door), and the secret tunnel to Agra, was not what captured my heart in Fatehpur Sikri. It was the palace complex with its sloping, terraced layout and red sandstone buildings laid out around vast open courtyards — the spatial effects confusing a visitor as one entered and exited levels. Hindu and Mughal style of architecture intermingled beautifully in the austere, red buildings, resplendent with delicate carvings. As I gazed wonderingly at the roof and the eaves of the buildings formed with thin wedges of stones placed tightly, one to another, with nary a hair's breadth between, still standing strong after more than four centuries, the dexterity of ancient India's architects is what came to mind.

Of princesses and musicians 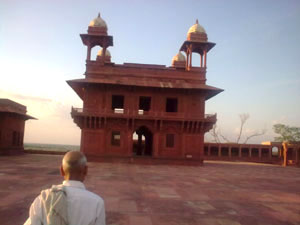 Facts parroted triumphantly to the teacher during school-days, Akbar's nine jewels (nav ratans), the hall of public audience (Diwan-e-aam), the hall of private audience (Diwan-e-khas), etc were revisited as one wandered among the buildings. The immortal stories of Tansen lighting lamps with raag Deepak and his daughter dousing flames with her rendition of raag Megh Malhar, as her father lost in the sublime music sets himself and the palace on fire, seemed to come alive in the environs of the now quiescent waters of the peerless pool (anup talao). Abul Fazl poring over his parchment of "Akbarnama," recording the history of the Mogul Emperors, and Abul Faizi, poet laureate, scribbling Persian poetry to entertain the emperor, no longer seemed figures vanished into the cobwebs and dust of history pages.

Although historians dispute the identity of the Rajput princess Jodha Bai (whether she was Akbar's wife or his daughter-in-law), the palace called Jodha Bai Ka Rauza has a distinctly Hindu character to many of the buildings; some of them have small alcoves to place idols of deities, like those found in old Hindu homes. An open hall with an elevated platform where ritual offerings were said to be consigned into the fire, with vents in the stone walls for the sweet-scented fumes to escape, was said to be Jodha Bai's prayer hall. Romantic that I am, I imagined that the stone seats and balustrades were worn smooth by royal ladies-in-waiting as they sat watching the rituals going on, rather than by the elements.

Palaces with latticed screens always evoked in me images of beautiful princesses in diaphanous flowing garments, languidly stretched across divans, wilting under the sweltering heat, as attendants waved peacock feather fans to cool them. And, the palace of the winds (hawa mahal) with its stone latticework which hid the royal ladies from view even as they enjoyed the cool breeze from the lake outside the palace complex, and the five-storied palace (panch mahal) with its four floors of decreasing size and 176 differently carved columns (once connected with latticed screens) just served to reinforce these images. Visions of the exquisite Aishwarya Rai as Jodha and the Adonis Hrithik Roshan as Akbar in the Hindi movie Jodha Akbar also flitted across my mind. 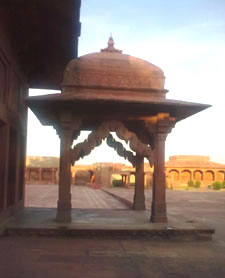 The myths surrounding each building varied to suit the wide-eyed listener and the wily guide. So I heard the same structure being described as a place where Hindu marriages where solemnized — and it did look like one with its garland-like carvings and four pillars — to a mother with marriageable daughters (to us), and the astrologer's seat, where one of Akbar's trusted spiritual guides held forth on his discourses (to others). One of the palace courtyards was inlaid with a huge ludo (pachisi) board. The guide decided that he shouldn't shock three innocent-looking women with scandalous details of Akbar's debauched life, so he told us that the emperor's wives played pachisi with gaily dressed children as pawns. While another guide explained to a group that Akbar played pachisi with gorgeous concubines as pawns, which did sound interesting.

The deer tower (hiran minar) has an unusual belief weaved around it. Local guides say it is constructed over Akbar's favourite elephant Hiran's (fast as a deer) grave. A strange tower decorated with six-cornered stars and hexagons, each of which was once embedded with elephant tusks in the centre; it now has tusk-shaped projections made of stone. Beware! Brothers and sisters are forbidden to circumambulate the tower together; only couples wanting to get married are allowed to do so (as told by our old guide). Interestingly, apart from being Akbar's vehicle, Hiran also held the additional responsible position of a conscientious judge who dispensed a novel form of justice, deciding whether a criminal merited the death sentence or not. If Hiran thought that a person was guilty, he placed his foot on the person's head and killed him. And, if he refused to do it thrice, the lucky mortal was set free as innocent.

Visiting merchants vending rich silks, exotic perfumes, sparkling gems and a multitude of other nitty-gritties needed for daily living were put up at the caravan serai (serai meaning guesthouse), a large courtyard surrounded by living quarters for the merchants. The sunhera makan (the golden house), Birbal's daughter's (thought to be one of Akbar's wives) house, diwan-e-aam and diwan-e-khas, the kwab-gah (palace of dreams, Akbar's bedchamber) the houses of Abul Fazl and Abul Faizi are some of the other buildings within the complex. The hathi pol (elephant gate) with its gigantic arch, about 20 feet from the ground, which was formed by the intertwined trunks of two elephant statues placed on either side of the gate, amazes with its sheer enormity. Sadly, Aurangzeb decapitated the elephants, since they represented Hindu deity worship to him.

Small wonder that Fatehpur Sikri made it to the National Geographic Traveler magazine's '50 Places of a Lifetime' (the magazine's compilation comes after a decade-long gap). Akbar abandoned the city after 15 years of residence. Various reasons have been cited — lack of perennial water, a move to uproot well-entrenched nobles, the death of his patron saint, etc. Whatever be the cause, India inherited an architectural treasure, a ghost city where you could spend a whole day just wandering through the various levels or stay put and daydream.

Nearest airport is at Agra. You can drive down from Agra (37km). The main railway stations are Agra Cantonment, Raja-ki-mandi and Agra Fort, which are well connected to Delhi. Fatehpur Sikri lies on a ridge, and you have to park your vehicle at the base of the mountain. Rickshaws, horse-driven carts or minibuses (best option) take visitors up; don't forget to ask when the last bus leaves from the fort. You can also walk up, but since you have to walk around a lot inside the complex, it's not advisable. Carry water. Prepare to be hassled by hordes of bogus tourist guides. You can ask for an official guide at the ticket counter. Set aside plenty of time. Visit the palace complex towards evening to see the sun set aglow the red sandstone buildings.

I have been to Fatehpuri Sikhari two time. This palace built by Akbar is really beautiful.
You must log in or register to reply here.
Similar threads
Fatehpur Sikri was once a Jain pilgrimage centre
Reactivation of abandoned Air Force airstrips
Why Abandoning Paris Is a Disaster for America
Killing hatred with kindness: Black man has convinced 200 racists to abandon the KKK by making frien
Share:
Facebook Twitter Reddit WhatsApp Link