New Delhi: Amid increasing Chinese dominance in the region, India will be delivering a Kilo Class submarine INS Sindhuvir to Myanmar Navy. "This will be the first submarine of Myanmar Navy," Anurag Srivastava, Spokesperson of Ministry of External Affairs (MEA) said during a briefing here on Thursday.

The transfer of military hardware comes after the recent visit of Army Chief General MM Naravane and Foreign secretary Harsh Vardhan Shringla to Myanmar. During that visit which took place earlier this month, India had agreed to supply artillery guns, tanks, bullet-proof jackets and other such equipment to Tatmadaw, Myanmar's military. New Delhi was already in the process of transferring the conventional submarine, refurbished by state-owned Hindustan Shipyards Limited, to Myanmar, at the time of the visit.

In what underlined the importance attached by India to the Eastern Asian nation, the government, in a statement had said - “India attaches high priority to its relationship with Myanmar in accordance with its ‘Neighbourhood First’ and ‘Act East’ policies. In recent times, both sides have strengthened their cooperation in several areas, including connectivity and trade, development projects, energy, capacity building, defence; and security and culture, and people to people links.”

The move may be viewed on the backdrop of increasing Chinese footprints in the Indian Ocean Region. India has been directly affected by Beijing's expansionist designs, which have been slammed by global powers including the US. Indian and Chinese armies have been locked in a bitter standoff along the Line of Actual Control (LAC) since early this year.

Empowering neighbours: India will deliver Kilo Class submarine INS Sindhuvir to Myanmar Navy. "This will be the first submarine of Myanmar N...

THE Bay of Bengal forms the north-eastern part of the Indian Ocean, bounded on the west and north-west by India, on the north by Bangladesh, and on the east by Myanmar, the Andaman and Nicobar Islands of India and Coco Islands of Myanmar.

Its southern limit is a line between Sri Lanka and the north-western most point of Sumatra (Indonesia). Bangladesh, India, Myanmar, Sri Lanka and Indonesia are the basin countries.

All these basin countries have navies. Their naval inventories originate from different sources except for India, which builds its own weapons and is also an arms exporter. China has the major share of weapons imported by these countries. Arms sales is a commercial venture with some degrees of political motivation. No arms sales to the countries on the Bay of Bengal came under the spotlight except the recently delivered submarine to Bangladesh and Myanmar by China and India respectively. Submarine arm operating in the Bay of Bengal region is not new. India and Indonesia have more than half a century’s experience of submarine operation. No country’s submarine fleet matches the Indian inventory.

Submarines, by any assessment, are a strategic weapon. They inflict huge psychological burden on the competing parties. In 1971, Pakistan Navy Submarine Gazi pushed Indian aircraft carrier INS Vikrant into a hideout until the submarine was lost under mysterious circumstances or the Indian navy sunk the boat in December 4–5, 1971 reportedly off the Vishakhapatnam coast in the Bay of Bengal. One submarine each on either side of the Strait of Hormuz would complicate matters in any eventual conflicts.

Bangladesh joined the submarine club in 2017 with two 035G (Ming class) submarine from China. India had concern at the submarine acquisition by Bangladesh. Concern expressed in inquisitiveness was to know the justification to have submarines. One school of thought for India’s concern was the ‘Chinese boat lurking at its door step’. Another assessment was the psychological burden that submarine operation inherently carries with it. Perhaps, the burden has been shrugged off, striking the deal to set up 20 Indian surveillance radar stations along the Bangladesh coast.

Was Myanmar’s acquisition of the submarine in response to Bangladesh gaining it? The straight forward answer is ‘no’. Myanmar has dreamt for decades of having it, as the commander-in-chief said, but planned in the early 2000s to acquire a fleet of three submarines, constructed submarine berth and workshop infrastructure well before acquiring the submarine. India, Pakistan and Russia trained Myanmar’s submarine crew in batches. Myanmar explored Russia, China and India to procure the submarine. India finally secured the deal. India refurbished the submarine and extended its service life till 2030, the target year for the Myanmar navy to complete a fleet of three submarines which are unlikely to be second-hand purchases.

While India opposed the submarine acquisition by Bangladesh, why did it sell INS Sindhuvir to Myanmar? Did India deliver the boat to counter the submarine in Bangladesh? A straight forward answer is unavailable. Perhaps, the answer could be ‘no’. But it is certain that the ‘China fear factor’ and the desire to stride China in Myanmar were India’s principal motivation behind the submarine sales.

China is deeply involved in Myanmar with multi-billion dollar civilian and military infrastructure development projects. China’s largest military investment project in Myanmar, worth $1.2 billion, is the Naval Shipyard at Thilawa. China is the largest supplier of arms to Myanmar. India has been in discomfort for long with Chinese political, economic and military influence on Myanmar. India has the endeavour to comfort Myanmar with civilian infrastructure projects, military sales and provide international political support. On the other hand, Myanmar wants to keep China’s influence under control playing a balancing act between China and India. India is much willing to provide that opportunity for Myanmar. India also needs Myanmar to fight insurgency in its eastern frontiers. India with the support from Myanmar has yielded results in subduing insurgency along the India-Myanmar border.

Since early 1990s, India has been expressing concern at China’s alleged ‘signal intelligence facility in Myanmar to monitor Indian missile launches into the Bay of Bengal and the Indian Ocean’ and dubbed the Myanmar coast as China’s second coast. With the sales of submarine and the delivery of Sheyna torpedo in 2019, India can now hope to secure a share of the Myanmar coast. However, there remains a challenge for India. What happens if China seizes Myanmar’s submarine purchases in the future or Myanmar buys new submarines from Russia as there is less possibility for Myanmar to opt for old submarines.

Has Indo-China competition placed Myanmar into a strategic advantage or Myanmar’s strategic location has pulled India and China into competition? In fact, it is has worked both ways. Myanmar is important both to China and India and vice versa. For China, Myanmar provides the strategic corridor to access the Bay of Bengal and reduces dependence on the choke point, the Strait of Malacca. China has been the closest ally of Myanmar for decades, including the period of isolation between 1988 and 2010. While China has been the protector of military regimes and its atrocity crimes against civilian population, India has preferred not to embarrass Myanmar by criticising internationally or regionally.

Myanmar also depends on China for many reasons especially to survive international backlash and sanctions resulting from persistent right violations, genocidal crimes against the Rohingyas and so forth. India despite being the practitioner of democracy did not dare risking its relational progress buy taking a stand against Myanmar for its genocidal crimes. Both China and India will strive to seek leverage in economic and military capacity-building cooperation in Myanmar. Myanmar’s plan to build a fleet of three submarines by 2030 is likely to make the Myanmar coast more competitive for China and India with a spill over effect into the Bay of Bengal.

by Commodore Mohammad Abdur Razzak (Retd) THE Bay of Bengal forms the north-eastern part of the Indian Ocean, bounded on the west and north-... 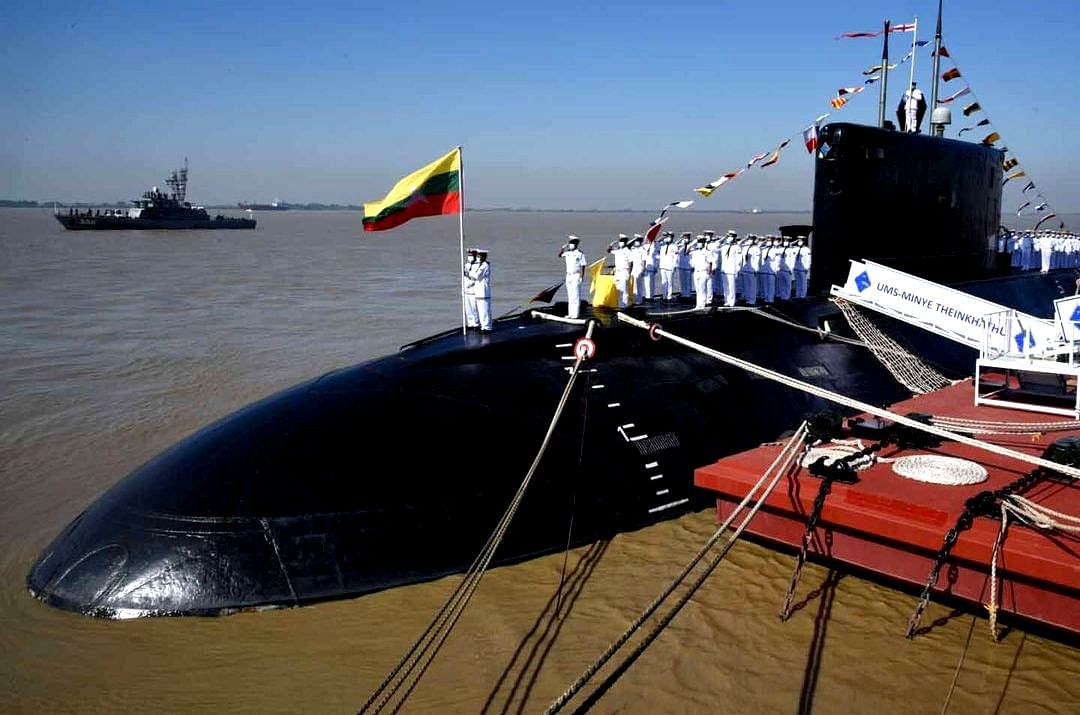 swarajyamag.com
You must log in or register to reply here.
Similar threads
HERON TP XP: THIS DRONE WILL KEEP AN EYE ON PAKISTAN, CHINA AND IT’S COMING TO AERO INDIA 2017
Eye on China: India to base Rafale jets in Eastern sector
With eye on China, India doubles down on container hub ports
With eye on China and Pakistan, India in talks to buy US Predator drones
Share:
Facebook Twitter Reddit WhatsApp Link