NEW DELHI: In a huge embarrassment, a full page newspaper advertisement given by the government on Sunday to mark the National Girl Child Day
Indian govt ad goof up carried a photograph of a former Pakistan air force chief along with that of Prime Minister Manmohan Singh and Congress president Sonia Gandhi. 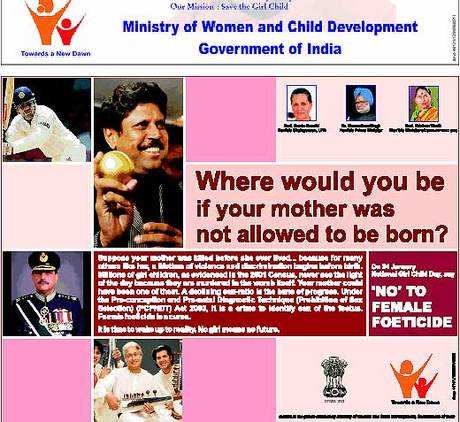 Indian govt ad goof-up: Former Pak Air Force chief features in the ad.​
The advertisement also showed sports icons Kapil Dev and Virender Sehwag and sarod maestro Ustad Amjad Ali Khan along with former PAF chief Tanvir Mahmood Ahmed in uniform with the heading, "Where would you be if your mother was not allowed to be born?"

An unrepentant minister for women and child development Krishna Tirath defiantly refused to accept the blunder and accused the media of hair-splitting.

Tirath told reporters that whether the mistake was on part of her ministry or the DAVP which releases government advertisements, will be investigated.

Tirath said the DAVP looks at advertisements "minutely" before releasing. At the same time, she said no name was mentioned with the photo of the former PAF chief.

"It was a photo of an officer in uniform and no name was mentioned," she said indicating that it was issued by mistake.

The mix-up, probably at the ministry's end, made the IAF go livid, with senior officers saying that the use of the PAF officer's picture was a "big embarrassment".

"I do not know why they have used the former PAF chief's picture. If they had wanted to use the photo of the IAF chief Air Chief Marshal P V Naik, all they needed to do was ask for one from the Air Headquarters," a senior IAF officer told PTI.

"This is a big embarrassment not only for the WCD ministry, but also to the IAF. Nowhere do such goof-ups happen," the IAF officer, who did not want to be named, said. Ahmed had retired from PAF on March 18, 2009.

Meanwhile, officials said that the publicity material for the National Girl Child Day was released by the WCD ministry through the DAVP after the direct approval and clearance from Minister of State Tirath, whose staff had prepared the text and images for the advertisement.

Tirath said advertisements of the ministry also come to her for approval before being sent to the Directorate of Advertising & Visual Publicity (DAVP).

Referring to the advertisement, she also said, "We are any way for global peace."

The media department of the WCD ministry had also cleared the advertisements, sources in the ministry said.