For all those clueless noobs on https://defenceforumindia.com/community/economy-infrastructure.30/

Where do we even start?

the only real problem Nippon-Jins are having is they aren't producing enough chibis babies, rest is just side effects.

Ask your questions, make sure those are informed questions based on existing scenarios, not academic.

for academic questions, internet is anyways there.

Pakisupapowa1971 said:
but that problem can be solved.Japanese economic model is one of the best out there in whole developed world. very very Low inequality, low inflation ( even deflation ), high living standards.
western economist are huge fans.

That's true but i've also heard that about 15 percent of japanese are ;poor; as per their standards, and seemingly not much is being discussed about this poverty thing at there or so,
and purchasing power of the japanese, despite prices remaining same, has seen some increase-decrease as well, like electronics have become cheaper yes but certain food items and stuff they import have become considerably costlier in long term, so much that they're doing what's usually called "shrinking" i.e. decreasing portion//proportion of the stuff for given price tag,
so yeah...

Also one big reason Japanese aren't having much kids is because raising kids etc is costlier affair for them, so they have to save and wait, while getting married//relationship and then if they're lucky at some peak age of 30 some they try to concieve and so...

Pakisupapowa1971 said:
Why debt is not a problem ( public debt ) & US can't go broke, same model is applicable to UK, Japan etc as well.

as long as supply & demand are met , you can print as much money as you want.
Click to expand...

Lol, this is a bunch of horseshit

These people have clearly no idea what deficit spending and mass-printing excess money did to Weimar Germany, Argentina, Mexico, Zimbabwe, The Roman Empire, Venezuela, The Confederacy, or the USA in the 1970's, or what it's doing to the USA economy today itself.

Might as well make a video saying "Why Zimbabwe can't go broke".

As someone rightly points out in the comments, the US has the luxury of having its debt issued in its native currency. And the dollar as the global reserve currency is backed by the US military that can invade and stop any country from moving away from the dollar, like what they did in Libya.

Even this tactic has run its course and won't be enough to slow down USA's slide into the abyss. Inflation is literally a tax on people who have money. The Weimar Government in Germany probably thought the same, "We can't go broke if we print our own money".

Their debt for the first time, is over 30 trillion. That combined with all the societal and demographic troubles that are increasing each day, the US is destined for a collapse.

Must read for nascent view of Capitalism.

Wealth of a Nation. (Extremely Based)

Must read for nascent view of Communism.

Must read for perspective view on Mixed market.

Economics is too broad a topic. This is a good place to start learning Econ...

Learn all about the fields of economics, microeconomics, macroeconomics, finance, and capital markets with hundreds of videos, articles, and practice exercises. Content in this domain covers courses from high school to college and beyond.

Pakisupapowa1971 said:
Zimbabwe, Venezuela doesn't produce s**t.
If US dollar is backed by US military, than it only goes on to show power of US or it's technological might.
at the end of the day...It is all about supply & demand, any country can print as much as they want as long as supply & demand are met & yes US can print as much as it want's as long as those criteria are met.
Click to expand...

Suppose we get to 10 trillion dollar economy, does the same logic apply to us??

impact of artificially controlling inflation doesn't go away, it shows up somewhere else. in this case external debt. someone else will have to absorb the cost of market fluctuations if the consumer is not paying.

Japan % of external debt to GDP 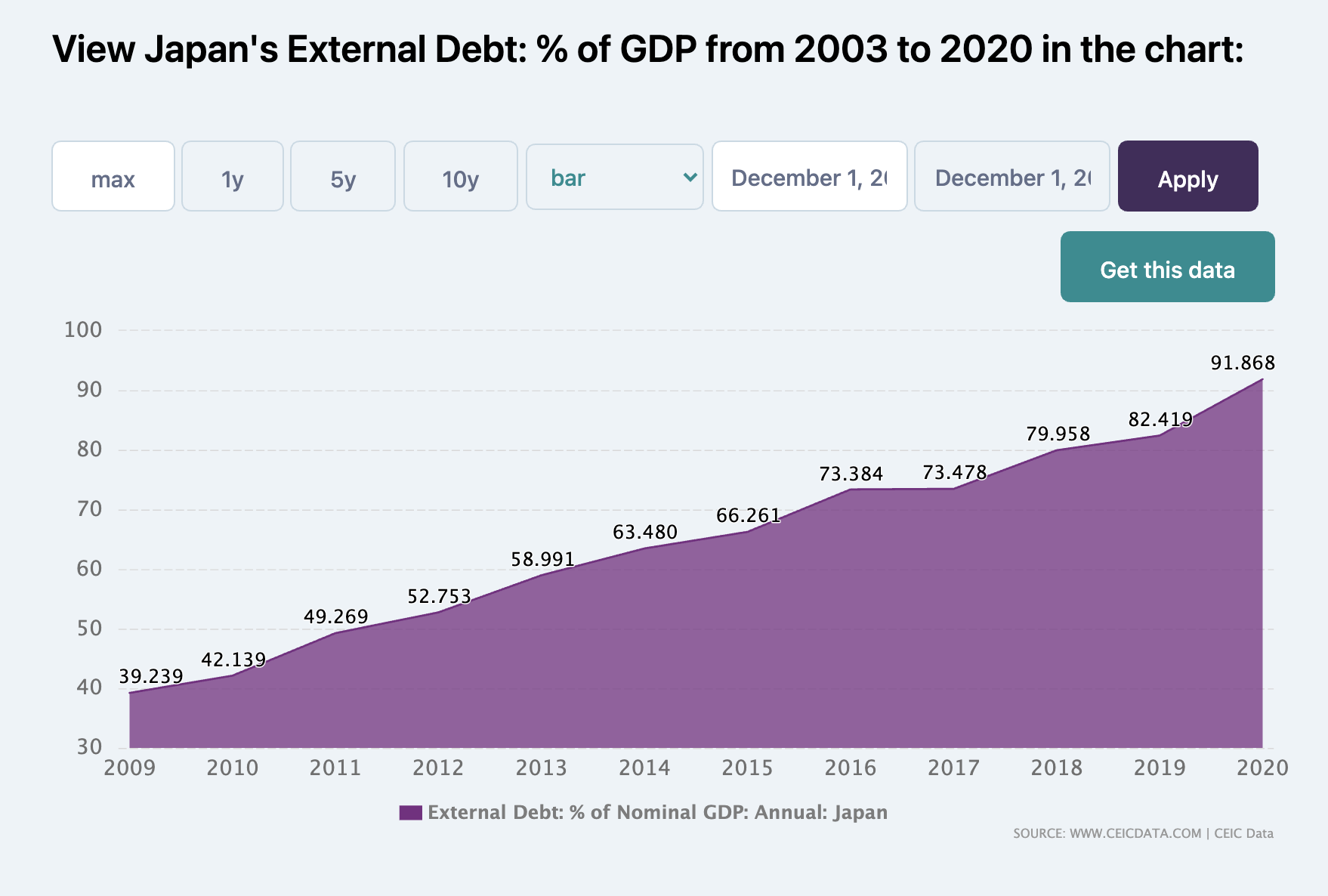 India % of external debt to GDP 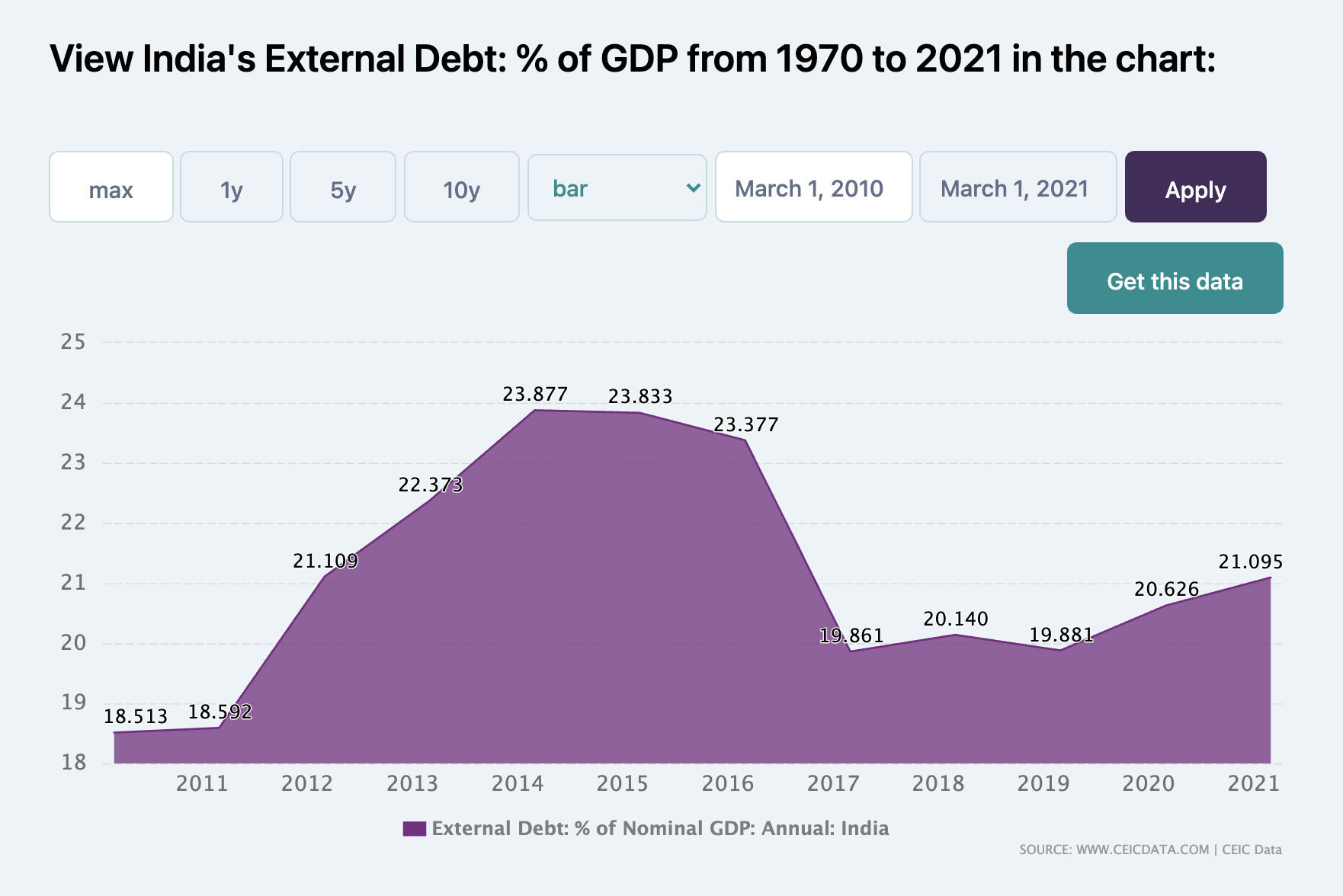 Pakisupapowa1971 said:
If US dollar is backed by US military, than it only goes on to show power of US or it's technological might
Click to expand...

Really? Does the fact that you have to invade, kill and loot resources show technological might? Muammar Gaddaffi was moving away from the dollar and was going to deal in a new currency backed by gold. Promptly invaded, killed and the whole plan scrapped by the US. Does that show you technological might or does that show you how fragile this system actually is? One little tweak and the dollar's value will become shit. They've been depending on their soldiers to invade and kill whoever they think is a threat to their order. That's how the dollar has stayed at the top. This tactic has, unfortunately for them, run it course.

That's really the whole point tho right? How exactly do you plan on magically printing more and more money and simultaneously keeping hyperinflation in check? Has it ever worked practically even once? The US has been printing money for decades now. And there really is no inflation there, right?

The fact that the dollar is global simply means that it will affect other countries as well when the dollar falls, unlike how Zimbabwe and Venezuela had only effects within their own countries.

More money has been printed in the last year in the US, than the last 100 years combined. And what has the result been?

In the 70s only 1 person work in the family to afford standard of living but today's generation needs both parent to work to get the same standard of living. House car energy bills, everything went up. Back in 1950s a blue collar worker could afford a large house, wife that didn't work and 5 kids. This is impossible now, unless you have a very well paying job.

Look at the price of a beer. It cost 2 dollars in 1990, and 4 dollars today. That means the value of the dollar has halved in those 30 years.

Printing more and more money all these years hasn't magically meant that inflation hasn't occurred. Modern Monetary Theory or MMT is a bogus theory that doesn't take any of this in account and falsely claims that a massive public debt and deficits are fine and will never lead to any fiscal crisis.

USA wouldn't need the military to protect their currency game. The military can't protect it anymore through the old tactics of wars. When they are flooded with currency and the countries producing products for them finally understand it's worthless because of the amount of it, its over.

If a currency is corrupt and worthless, who wants to sell anything for it? Their reserve currency status is getting very close to the end of the tunnel. What will they do then? Bomb other nations into selling them goods for a worthless currency?
You must log in or register to reply here.
Similar threads
How can India leverage Ukraine war for its Security & Economic benefit?
Day 1 of RCEP: In Asia, China fills an economic void the United States left
Climate Change- Paris Agreement, COP 26- Economics, Technology, Society and beyond
Denuclearization of Pakistan via economic sanctions
Share:
Facebook Twitter Reddit WhatsApp Link