A highway built by China threads almost all the way from Colombo, the capital of Sri Lanka, to this scruffy fishing town on the country’s southern tip, where Buddhist chants mark the time of day and wild elephants occasionally lumber through.

On the way, drivers pass a quiet international airport, a cricket stadium that holds wedding receptions more often than sporting matches, and a foundering deep-sea port — all produced with Chinese loans or construction.

The thoroughfare has yet to reach Hambantota, whose dusty main road hugs the sparkling expanse of the Indian Ocean. But it’s here where Chinese ambitions to develop a maritime Silk Road have run up against Sri Lanka’s tangled politics and identity, stirring distrust and creating an unlikely symbol of Beijing’s global leverage.

It’s been 69 years since we got our freedom, we don’t want to be under any other country.— D.V. Chanaka, a member of Parliament
Violent protests broke out in January after the government announced a deal with China to develop the port and build a massive industrial zone. Officials agreed to lease 80% of Hambantota harbor to state-controlled China Merchants Port Holdings for 99 years. Officials also plan to set up a 15,000-acre zone for factories.

Sri Lanka’s government marketed the $1.1-billion framework deal as a bailout that would help pay the multibillion-dollar debts it owes China and transform the struggling port in this impoverished region of brush and jungle. 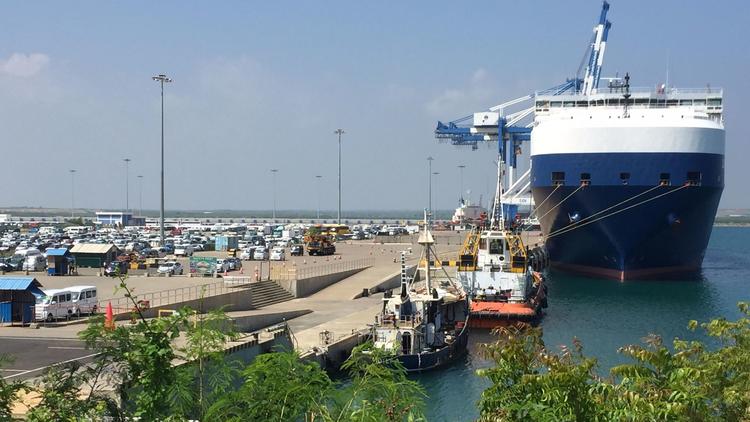 A car transporter docks at Hambantota port in Sri Lanka. (Jessica Meyers / For The Times)
“No negative force can stop the cooperation between China and Sri Lanka,” Chinese Ambassador Yi Xianliang said at the zone’s opening ceremony, as government supporters threw rocks at villagers and Buddhist monks protested nearby. They fought back until police unleashed tear gas and water cannons to disperse the crowd.

“If everything goes well,” Yi said, China would invest $5 billion in three to five years and create 100,000 jobs.

Yet details are murky and suspicions run deep. Environmentalists worry about elephant habitats; locals fear losing their homes to development. And the political party that once embraced Chinese money is now fighting the deal as too expansive for the former British colony.


“It’s been 69 years since we got our freedom, we don’t want to be under any other country,” said D.V. Chanaka, a Parliament member for the district who helped organize the protests. “People here fear it will lead to Chinese colonization.”

This marked the first time the country’s dependence on China clashed so openly with its sense of sovereignty. But like much in Sri Lanka — a picturesque island nation ruled by three European countries and then ruptured by nearly three decades of civil war — tensions built over time.

The Colombo skyline is a testament to China’s role in Sri Lanka, whose 21 million people total less than the population of Beijing. Chinese companies are building luxury apartments with views of the water and constructing an entire business district on land reclaimed from the sea.

Hambantota port is particularly significant because it lies along one of the world’s busiest trade routes, connecting Asia with Europe. This spot, about 100 miles southeast of Colombo, plays a key part in China’s “One Belt, One Road” initiative that seeks to revive ancient trade routes and spread influence.

“The Indian Ocean is going to be one of the most strategically contested in the future, with a rising India and a rising China making inroads into Africa and the Middle East,” said Kadira Pethiyagoda, visiting fellow in Asia-Middle East relations at the Brookings Institution’s Doha Center. “Sri Lanka is right in the center of that.”

The tear-shaped island lies off the southern edge of India, but it was China that offered the military and diplomatic support the previous government desired.

Chinese money poured in after Mahinda Rajapaksa became president in 2005, while the civil war against the Tamil Tigers guerrilla organization still raged. He welcomed Chinese jet fighters and ammunition when concerns about civilian casualties kept many Western countries from offering assistance.

Rajapaksa sought Chinese loans even after the war ended in 2009, as he tried to transform his poor hometown district of Hambantota into an international destination. He created a convention center in his name and a cricket stadium that rose out of the jungle. China spent nearly $2 billion building Hambantota port and the nearby airport.

The port has hemorrhaged more than $200 million, and the country’s second international airport rarely handles more than three outbound flights a day. 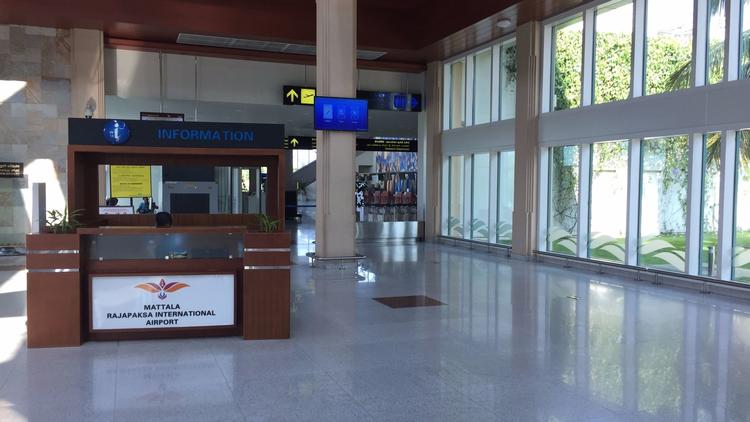 The international airport in Hambantota, Sri Lanka, sees three outbound flights on its busiest days. (Jessica Meyers / For The Times)
President Maithripala Sirisena beat Rajapaksa two years ago on a platform to loosen ties with China. It didn’t take long to change that view. Administrators estimate Sri Lanka owes China and other debtors $65 billion, with 90% of government revenue going toward repayment.

Essentially, officials said, they had no choice.

“Hambantota port can contribute immensely in the journey towards making Sri Lanka one of Asia’s modern, economic success stories,” the Development Strategies and International Trade Ministry said in a full-page note last month in local papers.

“Given the weaknesses in the government budget and the entire fiscal system in the country, the government … will not be able to finance the required investments to achieve this objective.”

Leaders see the deal as an opportunity to establish a thriving maritime hub for an economy driven largely by tea and tourism.

The government’s tone toward China has shifted from indignation to appreciation. Prime Minister Ranil Wickremesinghe plans to visit Beijing in May, where he will participate in a Silk Road summit. Officials also aim to complete a free trade agreement with China this year.

His visit could provide an opportunity to finalize the port deal, which faces more delay with domestic pushback and a court challenge.

The trade minister was unavailable for comment. China Merchants Port Holdings did not respond to an interview request.

Residents around Hambantota, which has yet to rebuild seaside houses swept away in a 2004 tsunami, are caught between a desire for development and an uncertainty about the cost.

“I don’t know why we need 15,000 acres for industry,” said Prithiviraj Fernando, chairman of the Center for Conservation and Research in Hambantota district. “It would rank among the world’s largest” industrial zones, he said.

Wildlife roams the region; peacocks strut on orange-tiled roofs and trucks stop for iguanas in the road. Fernando worries the industrial zone will disrupt habitats of about 400 elephants that live outside the region’s national parks.

This isn’t the first time China’s Silk Road hopes have fueled backlash. In Bangladesh, one person died this month protesting a Chinese-backed power plant. Beijing has run into tensions in Laos and Thailand, where it wants to build a rail line.

China has tried to allay fears of displacement. Foreign Ministry spokeswoman Hua Chunying told reporters that discussions with Sri Lanka occur “in the spirit of equality and mutual benefit, and following market rules.”

The Chinese Embassy in Sri Lanka recently helped open a vocational training center near the airport, where workers can develop construction skills. They also learn Chinese.

“We just want to let local people know Chinese regulations because they will be working for Chinese companies,” said Andrew Gao, who runs the center.

India also is eyeing the port deal. Some fear China’s Silk Road plan resembles a “string of pearls” meant to choke its neighbor. India fumed in 2014 when a Chinese submarine docked twice in Colombo. The Sri Lankan ambassador to China this month promised the country would not allow Chinese military into the port.

With China, “there’s no question there’s a strategic angle,” said Sasha Riser-Kositsky, Asia analyst at Eurasia Group, a political risk consultancy in New York. The problem is “untangling how much.”

Residents are just as confused.

Aruna Shantha Sayakkara spent one morning chatting with auto-rickshaw drivers outside the small, neat home he might lose.

“Seventy percent of people like this area getting developed,” said the Hambantota municipal council board member. “The deal will bring more.”

Down the road, S. Rushaun Dean slumped in a plastic chair.

“Twenty-five percent like the deal,” said the 37-year-old laborer, whose concrete walls held posters of Mecca and roses. “I’m worried we’ll have to leave. I was born here.”

Armed guards patrolled the port entrances nearby, where a lonely cargo ship docked. Another Chinese company is building the final stretch of highway that will connect the capital to Hambantota — and, quite possibly, its future.

“Sri Lanka can’t not take the deal,” Eurasia’s Riser-Kositsky said. “The Chinese are the only game in town.”
http://www.latimes.com/world/asia/la-fg-sri-lanka-port-2017-story.html

There is a reason why a lot of the regions under cpec have never been developed in history lol China can look forward to suicide bombings when Pakis realize that they have been hoodwinked and bankrupted by them.
You must log in or register to reply here.
Similar threads
Real reason behind CPEC
Americans Pass BUILD Act as a counter to China's CPEC
Senators in shock: CPEC western route doesn’t exist in Chinese record
Chinese prisoners working on CPEC in Pakistan: MP
Share:
Facebook Twitter Reddit WhatsApp Link