ISLAMABAD: A lawmaker claimed that China had sent a large number of its prisoners to work as labour on the $60 billion China Pakistan Economic Corridor(CPEC) development projects in Pakistan.


Nawab Mohammad Yousuf Talpur, a National Assembly member of opposition Pakistan Peoples Party (PPP), said at a recent meeting of parliamentary committee said, "I have learnt that prisoners have been brought from Chinese jails and they are constructing roads. They can be involved in crimes so there should be proper security arrangements."


Talpur who was quoted by Dawn, questioned the authorities to explain if they had entered into any tacit agreement with Beijing to use the country for penal settlements. "I contacted a concerned official who confirmed that prisoners had been working in Pakistan. My doubt was strengthened by an ambiguous response from the ministry of interior which rather than rejecting my claim just said it was not in the knowledge of the ministry," he said.


The PPP member said that he assumed that a secret or unannounced agreement had been made between the two countries "because prisoners cannot be sent from one country to another without taking the host nation into confidence." The lawmaker pointed out that a number of Chinese nationals had been arrested in ATM fraud cases, especially in the port city of Karachi.


The home ministry reportedly showed ignorance about the presence of Chinese prisoners in Pakistan. Rizwan Malik, the Special Secretary for Interior, told the parliamentary committee that Chinese workers were being given a three-layer security. "There is a separate security for Chinese nationals who have been working on CPEC projects. Separate arrangements have been made for those who have come for electricity projects," Malik said, adding that arrangements had also been made to provide security to Chinese students and business people.

We should use our prisoners the same way. What better correctional facilities than hard work. rison:
J

We should use our prisoners the same way. What better correctional facilities than hard work
Click to expand...

and those prisoners can build a bridge that rapes more women and kills more lovers. lol come on man. Your not paying them, they are going to spit in your dal.

jat said:
and those prisoners can build a bridge that rapes more women and kills more lovers. lol come on man. Your not paying them, they are going to spit in your dal.
Click to expand...

The Chinese would be spitting on paki dal, so it's a smart move.

Illusive said:
The Chinese would be spitting on paki dal, so it's a smart move.
Click to expand...

LOL chinese are claiming there paki slaves showing them there place. 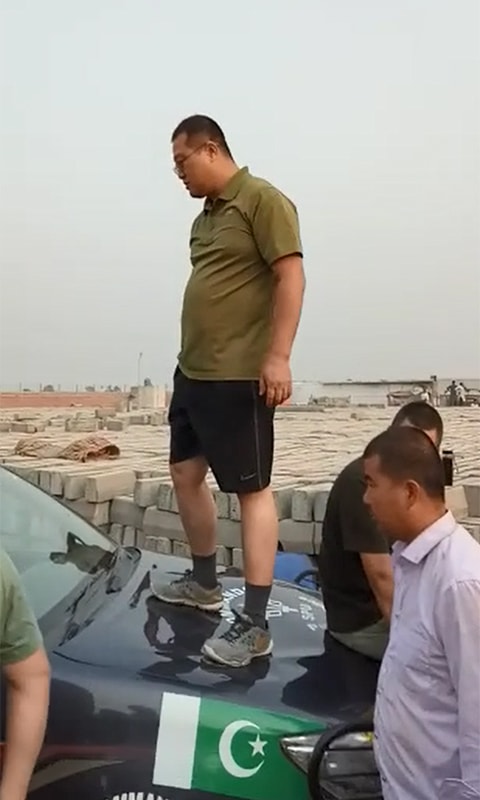 Chinese engineers and other staffers, engaged in the construction of M4 Motorway from Bahawalpur to Faisalabad, attacked policemen deployed for their security after the foreign workers were barred from leaving their camp's premises without a security squad, DawnNewsTVreported on Wednesday.

Screenshot shows a Chinese national standing on the bonnet of a police van.— DawnNewsTV


According to police officials, Chinese engineers and other officials wanted to leave their camp in Khanewal and visit a "red-light" area on Tuesday night. They resorted to agitation when denied permission to leave the camp without being accompanied by security officials.

On Wednesday morning, the Chinese workers stopped work on the project and abandoned heavy machinery and vehicles on various roads in the area. They also resorted to violence and attacked police in their camp.

Subsequently, the protesting Chinese engineers wrote a letter to Punjab Chief Minister Shahbaz Sharif, claiming that police officials refrained them from performing their duties and attacked them.

They also accused the security in-charge of attempting to hit the Chinese workers with his vehicle. Police officials, however, rejected the accusations and said they were fabricated.

Later in the day, Khanewal DPO Rizwan Omer Gondal held a meeting with the protesting Chinese workers following which they agreed to open the blocked roads.

Meanwhile, the police officials made it clear to the Chinese engineers that they will not be allowed to leave their camp without security arrangements.

This was not the first time when Chinese nationals in Pakistan attacked local police. In 2016, a clash occurred between the police and Chinese workers as the latter insisted on staying at a construction camp at night, but the former opposed the idea due to security reasons.

According to media reports, citing sources, some Chinese nationals associated with the Chinese army and trained in martial arts had attacked and injured police personnel deployed for their security.

However, the police had avoided taking any legal action against the Chinese to avert further conflict. In fact, the then CPO had suspended three SHOs and six other policemen for not restraining themselves from a clash.
https://www.dawn.com/news/1399531/chinese-workers-thrash-policemen-in-khanewal

Are pakis stupid, cant they see that china is treating them like a randi ?

first their PM gets strip searched and now chinese thrash their local cops, the pic above shows big disrespect towards paki flag too

Poor labourers were manhandled by chinese as well. Over at the pee kay defence people are justifying there peoples thrashing as if they deserved specially that looser areesh and war&peace. Some want hera mandi be built near construction sites for chinis. Now they are going to have whores on wheel for there chinese masters.

IBRIS said:
Poor labourers were manhandled by chinese as well. Over at the pee kay defence people are justifying there peoples thrashing as if they deserved specially that looser areesh and war&peace. Some want hera mandi be built near construction sites for chinis. Now they are going to have whores on wheel for there chinese masters.

Those guys r shameless and lowest form of creatures. They will even eat their own pee like pigs if cheeni masters want.
You must log in or register to reply here.
Similar threads
Prominent Tibetan monk dies in Chinese prison
New York shopper finds note made by Chinese prisoner
Five years on, Runggye Adak continues to suffer in Chinese prison
Chinese turn to generic Indian Covid-19 drugs
Share:
Facebook Twitter Reddit WhatsApp Link