"At the @COP21 will inaugurate India Pavilion, showcasing India's harmony with nature, environment & commitment to mitigate climate change," Modi said in another tweet.

The Prime Minister said he and French President Francois Hollande will jointly host a meeting of International Solar Alliance. Modi will also attend 'Mission Innovation' being hosted by US President Barack Obama.

Prior to his departure, the Prime Minister said in his monthly radio programme 'Mann Ki Baat': "The whole world is worried about climate change. There are discussions everywhere over it and concerns are being expressed.... The temperature of the Earth should not increase now. It is the responsibility and concern of all."

His emphasis on the responsibility of all assumes significance as the developed world is trying to place greater onus on developing nations like India in the fight against climate change.

India has been maintaining that the developed countries have been the major polluters over centuries and should assume greater role in fighting global warming by funding and transferring low-cost technology to developing nations.

Joining a select group of countries, India said it will provide $2.5 million for the vulnerable nations in the Commonwealth to help them introduce clean energy and reduce green-house gas emissions 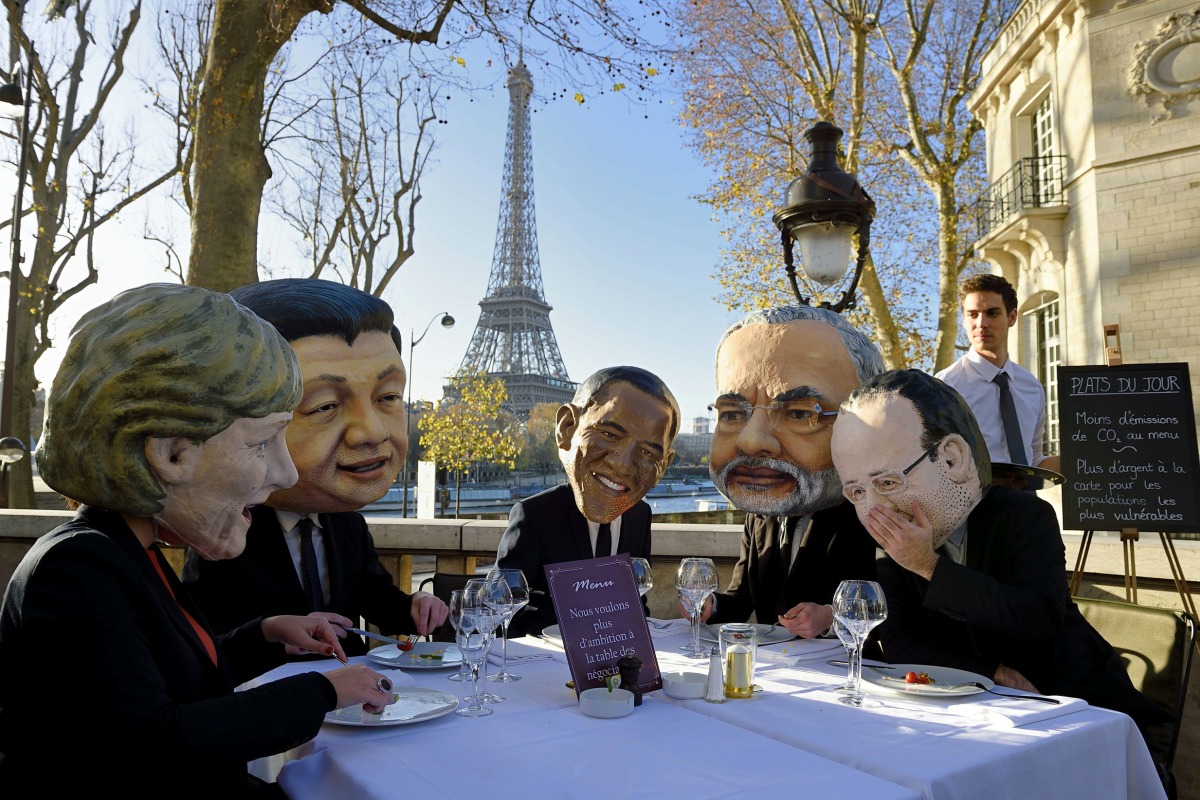 For Congi Zombies and AAPtards Modi being cartoonized emboldens their fucked up trolling and lame retard jokes against own Prime minister.

Most of them are publishing junior school level information on climate change and environment, just to sound cool

Most exasperating part of this particular news on COP21 climate change summit, which is happening after 6 years is AAPtards and Sonia Gandhi's pet trolling and abusing Modi for visiting Paris today.

Just yesterday when I came to know about remarks made by John Kerry, and bullying tactics used by western countries. I was quite worried that India may come under tremendous pressure. Modi visiting Paris signals exactly the same that India is under pressure and a firm stand to safe guard our interests is required.

Western countries are targeting both India and China. During UPA there were talks about India and China may come together to oppose western dictation but even at that time I knew China will play it on it own terms and independently.

India is as isolated as it is on every Geo political issue that is related to us directly or indirectly (e.g Terrorism etc.). When we need to stand behind our government there is no momentum whatsoever withing community of so called analysts and intellectual to create a consensus and to put forth our case to the world at large. 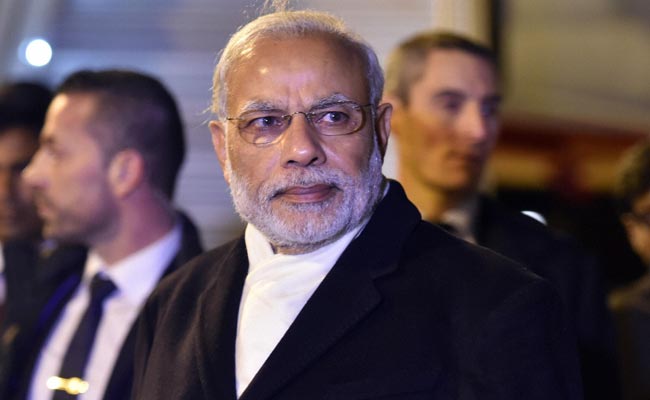 PM Narendra Modi asked the developed nations to fulfil their duty to shoulder the greater burden of the fight against climate change.

In a blunt warning to rich nations, Prime Minister Narendra Modi today said that it would be "morally wrong" if they shift the burden of reducing emissions on developing countries like India.

"The principle of common but differentiated responsibilities should be the bedrock of our collective enterprise. Anything else would be morally wrong," PM Modi wrote in the Opinion section of today's edition of 'Financial Times', UK's leading financial daily.

He asked the developed nations to fulfil their duty to shoulder the greater burden of the fight against climate change.


In the article, timed to coincide with the launch of COP21 conference on climate change in Paris, PM Modi said, "Some say advanced countries powered their way to prosperity on fossil fuel when humanity was unaware of its impact."

"Since science has moved on and alternative energy sources are available, they argue that those just beginning their development journey bear no less responsibility than those who have reached the zenith of their progress. New awareness, however, should lead advanced countries to assume more responsibility. Just because technology exists does not mean it is affordable and accessible."

"Justice demands that, with what little carbon we can still safely burn, developing countries are allowed to grow.

"The lifestyles of a few must not crowd out opportunities for the many still on the first steps of the development ladder," he added.

PM Modi reiterated his plans to launch an alliance of 121 solar-rich nations in the tropics aimed at bringing affordable solar power to villages that are off the grid.

"We expect the same from the world with respect to responding to climate change," he said.

PM Modi along with nearly 150 world leaders are in Paris to attend the opening of the climate summit with a central aim of the new agreement to keep global warming below 2 degrees Celsius over pre-industrial temperatures.

It is time to start the COP-21 Paris Climate Drinking Game!
Rules:
1 drink every time someone claims that ISIS and the Syrian refugee crisis was caused by climate change
2 drinks when the UN uses a child to make a plenary speech to shame all delegates (2 more drinks when we learn that this "just a child" is a son or daughter of one of the climate activists).
3 drinks for each time the top UN officials slam the fossil fuel industry (liver alert: please spread this over significant pauses)
4 drinks each time India, Malawi and the Philippines get criticised for building coal power stations and wanting to develop.
5 drinks when Filipino climate delegate, Yeb Saño, shows emotion (keep bottle full - this climate pilgrim is walking from Rome to Paris during an unusual cold spell).

Disqualification rules:
The game is over if:
- any delegate raises the idea of controlling livestock production or personal transportation industries (responsible for +50% of GHGs)
- any delegate questions the UN's dismal record on financial management when giving them 100 billion USD per year without any checks and balances.
Both of these cases are highly unlikely given the nature of how tightly the UN is trying to manage this show.

Narendra Modi told a press conference that as fossil fuels put the planet in peril, hopes for future prosperity in the developing world now rest on bold initiatives.

“Solar technology is evolving, costs are coming down and grid connectivity is improving,” he said. “The dream of universal access to clean energy is becoming more real. This will be the foundation of the new economy of the new century.”

Modi described the solar alliance as “the sunrise of new hope, not just for clean energy but for villages and homes still in darkness, for mornings and evening filled with a clear view of the glory of the sun”.

While signatory nations mostly hail from the tropics, several European countries are also on board with the initiative, including France.

“What we are putting in place is an avant garde of countries that believe in renewable energies,” he told a press conference in Paris. “What we are showing here is an illustration of the future Paris accord, as this initiative gives meaning to sharing technology and mobilising financial resources in an example of what we wish to do in the course of the climate conference.”

The Indian government is investing an initial $30m (£20m) in setting up the alliance’s headquarters in India. The eventual goal is to raise $400m from membership fees, and international agencies.

“It is very, very exciting to see India nailing its colours to the mast and providing leadership on this issue,” said James Watson, the director of SolarPower Europe, which represents the continents’ solar photovoltaic industry. “It will mean more opportunities for solar across the world and that can only be positive for combating climate change.”

The UN secretary general, Ban Ki-moon, placed the initiative in the context of the body’s sustainable development goals, particularly a related target, set in 2011, of achieving universal access to sustainable energy by 2030.

India has repeatedly said that it wants to use cheap solar to connect citizens who are currently without access to the electricity grid in remote and rural areas.

“The idea is that larger markets and bigger volumes will lead to lower costs, making it possible to spur demand,” said Ajay Mathur, India’s senior negotiator and spokesperson at the Paris summit.

India’s pledge to the Paris summit offered to draw 40% of its electricity from renewables by 2030. The country is projected to be the world’s most populous by then, with 1.45 billion people.

Climate Action Tracker described the promise as being “at the least ambitious end of what would be a fair contribution”, and not consistent with meeting a 2C target.

But some see Modi as a clean energy enabler, having rapidly rolled out more than 900MW of solar energy across Gujaratwhen he was chief minister there.

“India has emerged as the natural leader for this alliance, with its ambitious targets to install 175GW of renewable energy by 2022,” said Arunabha Ghosh, chief executive of the Council for Energy, Environment and Water in India.

Modi’s announcement on Monday comes hot on the heels of a pledge by the US and 18 other countries to provide $20bn for clean energy research by 2020, a doubling of current funding commitments.

A separate Breakthrough Energy Coalition, which will act as an investment platform for clean energy projects, is also being launched on Monday by Bill Gates and the Facebook founder, Mark Zuckerberg.

On Sunday, Dubai announced a Dh100bn ($27bn) programme to make solar panels mandatory for all rooftop buildings by 2030, part of a plan to make the city a global clean energy centre.

The Indian initiative, called the International Agency for Solar Technologies and Applications (Iasta), aims to spread cheap solar technology across the globe with pooled policy knowledge.

“We share a collective ambition to undertake innovative and concerted efforts aimed at reducing the costs of financing and urgent technological deployment for competitive solar facilities throughout our country,” a membership statement by the alliance says.

It adds that the alliance will “pave the way for production technologies and storage of solar energy, adapted to the specific needs of our country”.
You must log in or register to reply here.
Similar threads
Climate change deal clinched at COP21: Here's why India is on the receiving end
How animal herding can stop desertification and reverse Climate change
IIT Kharagpur Alumni Find Innovative Way to Tackle Climate Change and Impress the World
Views on Paris climate deal signing: 'A step on a long journey'
Share:
Facebook Twitter Reddit WhatsApp Link