Never autoplay videos
BEIJING – A senior Chinese diplomat said Wednesday that tensions on the Korean peninsula were like "two accelerating trains" headed for collision, saying the way to defuse the crisis required action from both sides.

Foreign Minister Wang Yi proposed that North Korea could suspend its nuclear and missile activities in exchange for a halt in joint military drills conducted by the U.S. and South Korea.

He described escalating tensions between the North and Washington and Seoul to "two accelerating trains, coming toward each other with neither side willing to give way."

"The question is: Are the two sides really ready for a head-on collision?" Wang told reporters. "Our priority now is to flash the red light and apply the brakes on both trains."

In a briefing with reporters, Wang said China proposes that as a first step to defusing the looming crisis, the North might suspend its nuclear and missile activities if the U.S. and South Korea halted their military exercises.

"This suspension-for-suspension can help us break out of the security dilemma and bring the parties back to the negotiating table," Wang said, describing the approach as trying to address all parties' concerns in a "synchronized and reciprocal" manner.

China has been stepping up pressure on North Korea, its once-close Communist ally, to give up its nuclear and ballistic missile programs. Last month, Beijing suspended all coal imports from North Korea for the rest of the year.

China is North Korea's largest source of trade and aid, and the move deprives the North of an important source of foreign currency. Beijing wants the U.S. in return to restart long-stalled negotiations with North Korea to ease regional tensions.

A White House official downplayed Wang's suggestion, saying China has made similar proposals in the past. The official was not authorized to discuss the policy publicly and spoke on condition of anonymity.

Wang, who answered a range of questions at a briefing on the sidelines of China's annual national legislative sessions, also urged South Korea to suspend deployment of a U.S. anti-missile system.

Wang called the deployment a "wrong choice," saying it is the biggest problem hurting relations between Beijing and Seoul. On Tuesday, U.S. missile launchers and other equipment needed for the system arrived in South Korea.

Washington and Seoul say the system is defensive and not meant to be a threat to Beijing or Moscow. The U.S. military said THAAD can intercept and destroy short and medium-range ballistic missiles during the last part of their flights. China is opposed to the system, saying it would allow U.S. radar to peer deep into its territory and monitor its flights and missile launches.

"We urge some forces in South Korea not to keep insisting on taking this path, otherwise the result can only be damage to others and harm to yourself," Wang said.

On Tuesday, China's foreign ministry said Beijing will take "necessary measures" to protect itself against the deployment of the system and warned that the U.S. and South Korea should be prepared to bear the consequences.

Asked about the state of China's relations with the U.S. under President Donald Trump, Wang said the two countries' ties were transitioning steadily.

Wang said China and the U.S. could become "excellent partners" if they had mutual respect and did not seek conflict with each other. He said the two sides should not seek to build one's success at the expense of the other and get past the differences in their political systems.

"The Chinese people have great confidence in our own social system and path," Wang said, referring to the country's authoritarian system of one-party rule. "And we welcome efforts to build a better United States."

Relations between the world's two largest economies have faced new uncertainties posed by Trump's accusations that China cheats at trade and his threats to raise import tariffs. Trump has also criticized China's activities in the South China Sea.

Washington's pursuit of an "America first" foreign policy is raising questions about whether China would be trying to fill the void if the U.S. relinquishes its traditional global leadership role.

Wang said Beijing did not seek such a role and instead wanted to shoulder greater responsibility.

"China believes in the equality of all countries, large and small, and we don't believe some countries should lead others," he said.

Master speaks for its dog. China has 2 pet dogs North Korea and Pakistan. Both rabid and dangerous to world and needs co-operation of all world powers to eliminate them.

(CNN)The United States and North Korea are set for a "head-on collision" with neither side willing to give way, China's top diplomat has warned.

In a week of heightened tensions in the region, Foreign Minister Wang Li cautioned the US in unusually frank language against the deployment of a controversial missile defense system in South Korea. The system is vehemently opposed by China.
But he also had strong words for North Korea, saying Pyonyang should suspend its nuclear weapons program.
"The two sides are like two accelerating trains coming towards each other," Wang told reporters in Beijing. "The question is, are the two sides really ready for a head-on collision?" 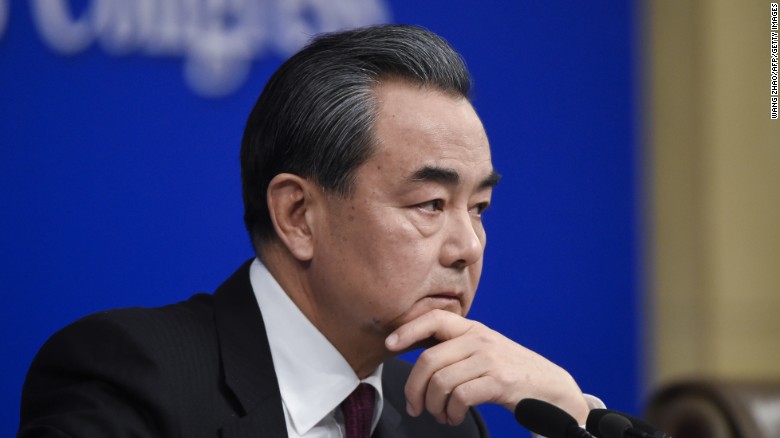 China's Foreign Minister Wang Yi at a press conference in Beijing on March 8.
China's stern warning came in the week that North Korea launched four ballistic missiles and the US deployed the first components of the Terminal High Altitude Area Defense missile system (THAAD) in South Korea.
A report in China's state news agency Xinhua said the deployment of THAAD could kick off an "arms race" in the region. "More missile shields of one side inevitably bring more nuclear missiles of the opposing side that can break through the missile shield," the article said, suggesting China could accelerate its nuclear program.

Wang called on the US and South Korea to ease tensions in the region by suspending annual joint military exercises that antagonize North Korea, in exchange for Pyongyang halting its nuclear program.
"Nuclear weapons will not bring security," Wang said. "The use of force is no solution. Talks deserve another chance and peace is still within our grasp." 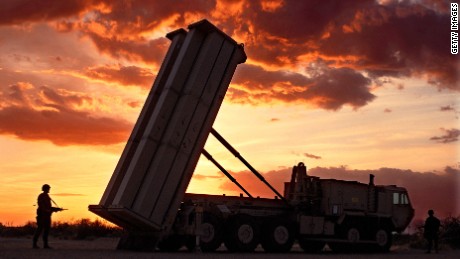 intended to counter North Korean aggression, according to the US military, but China is strongly opposing its deployment.
Beijing believes the missile system could be used to spy on their activities, rather than monitoring incoming North Korean missiles, Mark Tokola of the Korean Economic Institute of America said.
On Wednesday, Wang said South Korea must "cease and desist" the deployment, which he described as undermining Chinese security.
Already China has expressed its displeasure through placing bans on South Korean artists and celebrities, while there have been reports of unofficial sanctions against the country's businesses.
China's language 'unusual'[/paste:font]
Professor Steve Tsang, director of London's SOAS China Institute, said Wang's language during the briefing was "unusual."
"They don't usually use this kind of language but it's not completely surprising given that they are not really effectively able to constrain or restrain what the North Koreans do and they're deeply unhappy about the US deployment of THAAD to South Korea," he said.
North Korea ballistic missile launch


Tsang said China was very concerned about how the situation on the Korean Peninsula was developing. "If the Americans were seriously thinking about some sort of preemptive strike to take out North Korea's nuclear capabilities, it would be extremely messy ... China would have a huge price to pay," he said.
Euan Graham, director of the International Security Program at Sydney's Lowy Institute, said he was "very skeptical" of Wang's hopes for brokering a potential deal between North Korea and the US.
"To me, it speaks of a more tactical (statement) -- China's lost the initiative in the Korean Peninsula somewhat, not so much due to a proactive US policy to the region ... but in the way that North Korea has been throwing its weight around," he said.
Tillerson to visit China
US Secretary of State Rex Tillerson is heading to the region for talks next week, which are likely to include how to defuse the situation in North Korea.
Tillerson will touch down in Tokyo, Japan, on March 15 to begin his first east Asian tour since being sworn in. He'll then go to Seoul before making his final stop in Beijing on March 18. 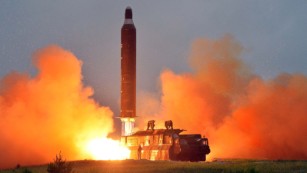 US aims to reassure alliance with S. Korea 01:46
He'll be the second senior member of the Trump administration to tour East Asia since the new US president was inaugurated less than two months ago.
Secretary of Defense James Mattis already visited Japan and South Korea in early February, to reiterate US support for their two regional allies.
Wang said he had met Tillerson before, describing him as "a good listener and a good communicator."
"I hope and believe we can establish a good working relationship," he said.
Graham said the Trump administration's focus has been on East Asia compared to the previous Obama administration's broader engagement with southeast Asian countries.
"There was a genuine and concerted attempt to engage in bilateral relations (with) Singapore, the Philippines and Indonesia ... we don't see that same level of enthusiasm or engagement from this administration," he said.

US is losing it all. China happily arming its allies with nukes and foolish south korea doesnt arm itself with nukes. When the day comes us will be a sitting duck while south korea is devastated.