London, England (CNN) -- Volcanic ash from Iceland snarled air traffic across Europe for a second day Friday, causing the cancellation of some 16,000 flights, according to the intergovernmental body that manages European air travel.

The ash cloud is expected to drift farther south and eastward through Europe on Friday night, Eurocontrol said, raising concerns that more countries and airports could be affected.

The cloud comes from an eruption under an Icelandic glacier that began early Wednesday. The eruption under the Eyjafjallajokull glacier -- the latest in a series that began on March 20 -- blew a hole in the mass of ice and created a cloud of smoke and ash that went high into the air.

iReport: Have your plans been disrupted? Send your images, videos

The volcano was still erupting Friday and producing a lot of volcanic ash, said a spokesman for Iceland's Department of Civil Protection and Emergency Management.

"It is reasonable to assume that there will be some significant disruption to European air traffic tomorrow," Eurocontrol Deputy Head Brian Flynn told reporters at a news conference in Brussels, Belgium. He called the situation "major and unprecedented."

Eurocontrol said it expected around 11,000 flights to take place Friday, in contrast with the usual 28,000. The impact will last at least another 24 hours, Eurocontrol said Friday morning.

Officials said the cloud of ash wafting over to Europe was too dangerous for aircraft because it may cause engine and electrical failure.

"Volcanic ash is something that you cannot see," Flynn said. "There is nonetheless risk that these minor particles could interfere with civil aircraft, and in the event of an aircraft penetrating the volcanic ash area, there could be a catastrophic failure of an aircraft engine, and obviously that could have serious safety consequences."

The ash has forced the closure of some of Europe's busiest airports, including Charles de Gaulle in Paris, France, Heathrow in London, England, and Schiphol in Amsterdam, Netherlands.

Airspace was closed over Switzerland, the Czech Republic, Belgium, Denmark, Finland, Lithuania, Estonia and the Netherlands. It was partially closed in the United Kingdom, France, Germany, Poland, Sweden, Norway, and Ireland, Eurocontrol and local authorities said.

Germany's closure included every international airport except for Munich and Stuttgart, according to Eurocontrol. Warsaw and Krakow airports in Poland were closed, which may affect plans for world leaders to attend Sunday's funeral for Polish President Lech Kaczynski.

The Spanish airport authority said that 617 fights have been canceled and that 40 percent of the scheduled 1,600 flights between Spain and northern Europe were affected by the ash.

Medevac flights from Afghanistan and Iraq were being rerouted from their usual landing point at Ramstein Air Base in Germany, where flight operations are shut down, U.S. military officials said.

Two Royal Air Force bases in England -- at Lakenheath and Mildenhall -- will be shut down for at least two days, the U.S. Air Force said Thursday. Dozens of U.S. Air Force F-15s and other fighter jets and tankers are not flying, and flights to Iraq and Afghanistan flying through that airspace are being diverted to other routes.

The Finnish air force said Friday it had found severe damage to the engines of F-18 Hornet fighter jets flown the day before when the airspace was open.

The accumulated ash melted in the combustion chamber, the air force said, a situation that could lead to the overheating of engines and overall deterioration.

At least some of the engines have had to be removed, the Finnish air force said.

Air transport and weather authorities all over Europe are working together and with the airlines to discuss the impact of the ash cloud, British Transport Secretary Andrew Adonis said.

Adonis said he would discuss contingency plans with transport officials Friday in case the situation continues.

English Channel ferry operators and Eurostar, which runs high-speed trains between London, Paris and Brussels, said they were experiencing a high demand as passengers seek other ways of getting to their destinations. Adonis said Eurostar had added services to cope with demand.

Travelers rush to trains and ferries

Passengers at Heathrow's Terminal 1 seemed resigned to having missed their flights.

"I don't want the plane going down. This is really dangerous," one man said. "But I've been in some different situations over the years, and this is a new one."

One traveler said she had missed a wedding because of the problems.

"Not sure if we're still going to go or not," she said. "I don't know that there's any point any more, 'cause we've missed everything the trip was ultimately for."

Hotels around Heathrow were full Friday as they tried to accommodate stranded passengers. Dozens of children played soccer in the Renaissance Hotel's reception area, which is usually filled with business travelers and flight attendants.

U.S. carriers have canceled 196 flights so far Friday between the United States and volcano-affected areas in Europe, according to the Air Transport Association of America.

Delta Air Lines canceled 65 international flights from its U.S. hubs scheduled over Thursday night and Friday morning in response to the ash cloud. The decision affected flights to Amsterdam; London; Shannon, Ireland; Brussels; and Mumbai, India. Delta said it would determine later Friday whether to resume flights to such destinations.

Air China announced the cancellation of most of its Friday flights to Europe.

It's hard to predict how long it will be before air travel can resume, said Matthew Watson, a geophysicist at England's Bristol University.

"You really need two things to happen: You need the volcano to stop emplacing ash to the altitude that commercial aircraft fly at, 30,000 to 35,000 feet, and you then need the upper level winds to blow the ash and disperse it out of the airspace," Watson said.

How long that will take "depends very much on the volcano. If this is it and it's stopped right now and it doesn't do anything else ... I imagine you are looking at 24 to 48 hours to clear UK airspace," he said.

Experts: No end to volcano ash in sight

Britain's Health Protection Agency said the concentration of ash particles that may reach the ground in Britain will likely be low and not cause serious harm. People may suffer irritated eyes, runny noses or sore throats -- or even notice the smell of sulphur -- but any effects are likely to be short term, the agency said.

If the airspace closures continue for as long as three days, some 6 million passengers will be affected, the Center for Asia Pacific Aviation estimated Friday.

Passengers also may not be able to make travel insurance claims because the volcano's impact may be classified as an act of God, the center said.

"Recovery in the key trans-Atlantic business market (the lifeblood for many European and U.S. long-haul airlines) is still elusive, while short-haul premium demand within Europe continues to contract," the center said in an analysis on its Web site.

"Airlines' finances, particularly in Europe, remain fragile, and airline managements will be hoping the ash -- and the attendant paranoia -- settles quickly."

More about the phenomenon:

April 16, 2010
Experts Seek Clues to How Long Eruption Will Go On
By HENRY FOUNTAIN

As an Icelandic volcano spewed more ash on Friday, disrupting air travel in Europe for a second day, the big question for scientists was how long the eruption might continue.

The answer will go a long way toward determining any lasting impact on air travel, climate and health. But experts said that, for now, the question was essentially unanswerable.

"This may have been it," said Colin Macpherson, a professor in the department of earth science at the University of Durham in England. "Alternatively it may be that we're seeing the beginning of prolonged activity."

Jennie Gilbert, a professor at the University of Lancaster in England who has studied Icelandic volcanoes, said: "I don't think there's any general feeling for how this volcano will operate. My best guess is that it will be explosive for a few days and then might continue at a reduced level."

Dr. Macpherson said that volcanologists in Iceland would be monitoring the volcano for indications that the eruption was continuing or starting to taper off. Small-scale seismic activity, for example, would be a sign that hot magma was still coming up through the volcano, cracking the ground as it moved through. Slight changes in the slope of the volcano's flanks, as measured by a device called a tiltmeter, would suggest that gases were continuing to build up below as they bubbled out of the magma, causing the surface to bulge, or were dissipating.

"As long as the tilt is increasing, it's still erupting," Dr. Macpherson said.

One complicating factor is that the eruption is occurring under an ice sheet, the Eyjafjallajokull glacier. Melting of the underside of the ice has caused flooding, forcing evacuations of some communities near the volcano in southern Iceland.

But of more concern for Europe is how the water being produced might be affecting the volcano and the ash it is generating.

"Certainly the fact that the eruption is going on underneath the ice sheet is likely to have an effect on the explosivity of the volcano," Dr. Macpherson said.

He likened the situation to putting a hot pan under the kitchen faucet — as the hot magma hits the cold water it rapidly creates steam. If the steam is contained by rock, the pressure can build up and a localized explosion can occur.

Dr. Macpherson said that the magma also contained gases of its own that bubble out and build up. The explosivity of the volcano is a function of both these gases and the steam, he said, and the precise contribution of each is unknown. But if the eruption continues at some point there will be no more ice to melt near the eruption site, which might reduce the explosivity.

Dr. Gilbert said the presence of water can also affect the characteristics of the sandlike ash that is produced. As the molten rock hits the cold water it is rapidly quenched, fusing into a glassy material. Then when the pressure builds up and the volcano explodes, this material breaks up into very fine particles. "It's like this sort of shattering effect," she said. 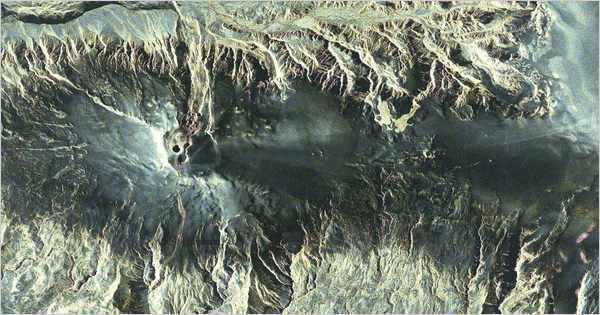 A computer enhanced image of the volcano under the Eyjafjallajokull glacier in Iceland taken by the TerraSAR-X satellite on Thursday evening.
You must log in or register to reply here.
Similar threads
The US is juggling chaos and coordination in order to contain China
Karachi again slides into chaos
Anarchism vs Chaos - Libertarianism and it's critics
Intervention in Iran would trigger war and chaos: France
Share:
Facebook Twitter Reddit WhatsApp Link