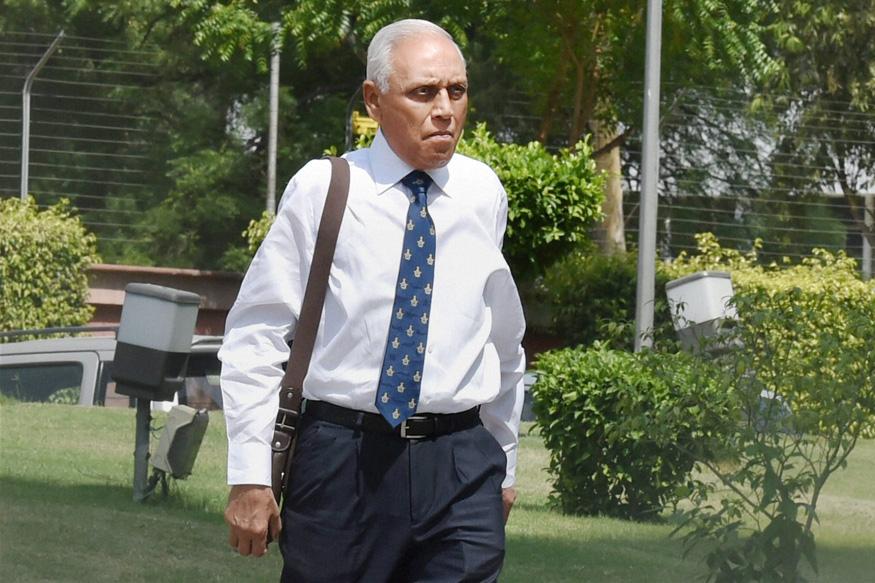 Sources said they will be produced in court on Saturday.

Tyagi, who retired in 2007, was questioned by the CBI extensively in the past in this case. "This is the first time that a former IAF chief has been arrested by the central probe agency," official sources said.

The Rs 3600 crore to supply 12 VVIP helicopters from AgustaWestland came under the scanner after Italian authorities alleged that bribe was paid by the company to clinch the deal. Tyagi has been accused of influencing the deal in favour of AgustaWestland during his tenure as the IAF chief. He has repeatedly denied the allegations.

Reacting the arrest, Christian Michel, the alleged middleman in the deal, told CNN-News18 that he had never met the former IAF chief. Michel, however, admitted to meeting Julie at a party. “He was introduced to me as a person who was working in the energy sector and an influential person. I was never told formally that the Tyagis were working for Agusta or helping Agusta in the chopper deal,” Michel told CNN-News18.

The FIR filed by the CBI mentioned that Tyagi allegedly helped in swinging this deal, specifically by lowering the service height from 6,000m to 4,500m.

The FIR, however, doesn't mention Tyagi having received any money, but says his cousins received payments from Haschke in two remittances to the tune of 1,26,000 euros and 2,00,000 euros for 'consultancy' services through IDS Tunisia.

On January 1, 2014, India had scrapped the contract with Finmeccanica's British subsidiary AgustaWestland for supplying 12 AW-101 VVIP choppers to the IAF over alleged breach of contractual obligations and charges of paying kickbacks of Rs 423 crore by it for securing the deal.

These choppers were supposed to be used for flying the President of India, the Prime Minister and other such VVIPs.

CBI had also got issued Letters Rogatory (judicial requests) to multiple countries to gather more leads and evidences in this case.

AgustaWestland CEO Bruno Spagnolini and Guiseppe Orsi, chairman of AgustaWestland's parent company Finmeccanica, were arrested by Italian police in February 2013 on charges of paying bribes to win the deal.

AgustaWestland case: CBI arrests former Air Chief SP Tyagi, 2 others
The CBI said that all the three people have been arrested for accepting illegal gratification for exercising influence through corrupt or illegal means.

By: Express Web Desk | New Delhi | Updated: December 9, 2016 6:07 pm
The CBI on Friday arrested former Air Chief SP Tyagi in connection with the Rs 3,600 crore AgustaWestland chopper deal case. A Delhi-based lawyer, Gautam Khaitan and SP Tyagi’s cousin Sanjeev Tyagi alias Julie Tyagi was also arrested along with him. The CBI said that all the three people have been arrested for accepting illegal gratification for exercising influence through corrupt or illegal means.

“They were arrested on the allegations of who accepted illegal gratification for exercising influence through corrupt or illegal means,” said the CBI.The CBI said that all the accused have been arrested under Section 120B, Section 420 IPC and Prevention of Corruption Act, 1988. They were called for questioning at the CBI headquarters. The CBI further said that the probe revealed that undue favour was shown and that AgustaWestland Ltd accepted illegal vendors through middlemen and relatives, including, Sanjeev Tyagi.

Tyagi’s arrest comes after the Enforcement Directorate (ED) had questioned him earlier in May this year, about the VVIP helicopter deal. He had also been quizzed for days by the CBI in the case. This was the first time that the ex-Chief of Staff of the Indian Air Force had been summoned by the ED.

But...but the middle man is still hiding in Dubai!
R

If everything goes right, next will be NAK Brown for Pilatus
http://www.livefistdefence.com/2013/02/dont-want-or-need-hals-htt-40-trainer.html

rohit b3 said:
If everything goes right, next will be NAK Brown for Pilatus
http://www.livefistdefence.com/2013/02/dont-want-or-need-hals-htt-40-trainer.html
Click to expand...

And Mummy ji also, why are we forgetting mummyji?

What is AgustaWestland scam?

Subramanian Swamy had explained what the scam is, during a debate in Rajya Sabha in May this year, targeting the Congress and Congress president Sonia Gandhi.

He had said, “....This has got nothing to do with vendetta. We are at an early stage of prosecution and therefore three things have to be made clear.

“What are the admitted facts that they also can’t deny? What is the criminality? How do we proceed now on the basis of what we know?”

Swamy did not taken Sonia Gandhi’s name at the time, but he did not mince his words either. He referred to her as “a super cabinet” and a “higher authority than then PM Dr Singh” as he alleged that there is plenty of evidence to prove that Sonia Gandhi was a principal player in the scam, an allegation both she and her party have aggressively denied.

“The admitted facts are the CAG report, the Italian HC judgment. Yes it is true that the NDA had initiated the process of buying the 8 new helicopters but the objective was that the VVIP’s be able to fly to the remote areas. . .

“The aircraft you are buying, they have to be subjected to field trials. But they (UPA govt.) used some other helicopter. They also conducted the testing in Italy, which I don’t have an objection to but why use another helicopter to do these trials. This is a corrupt act.

“Another corrupt act: The original proposal was to buy 8 helicopters. After it became clear that AgustaWestland was the only one to qualify, they decided to buy four more. What was the need for these additional four? Who were these extra VVIP’s which needed it? An excess of Rs 1200 crore was spent.

“The airforce gave a benchmark of Rs 793 crore and it was approved by Mr Antony. But a contract negotiation company rejected that benchmark and gave another number Rs 4877.5 crore. Who is responsible for overruling AK Antony’s benchmark. Surely it wasn’t Manmohan Singh.

Here are some other points that were made by Swamy:

- CAG says that the helicpoters which were bought in 1988 were hardly utilised, then what was need for new ones?

- Original proposal was to buy 8 helicopters, after it became clear that Agusta was the only one to qualify, they decided to buy 4 more.

- Field tests were not conducted on AW101, supposed to be used for VVIP, but on some other choppers

- There was a clear effort to eliminate all other companies so that only Agusta would fit the required criteria.

You can watch the video here >> http://swarajyamag.com/insta/what-i...ain-the-details-and-take-congress-to-cleaners

I am happy that favouritism for fancy imports; an attitude in wide practice since very long time and so far largely unchecked will have a reason for making a person worry.
N

Corruption is just one aspect, these deals like with Bofors meant Indian security was compromised as babus became worried about clearing much needed subsequent deals.

The amount of damage caused by the previous governments is staggering.
N

It begins. Hope the agencies aren't too gentle.


HoPE..Aftr PAk ANd Note bann Sergical Strike....
NEXT is ON Justice system.....
N 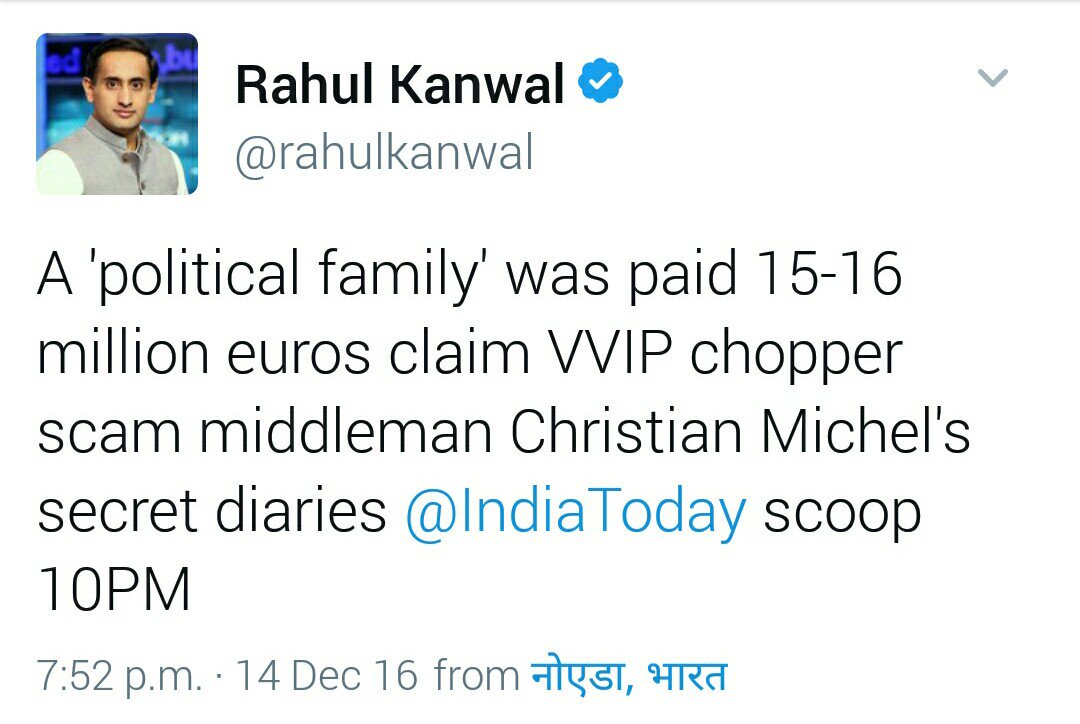 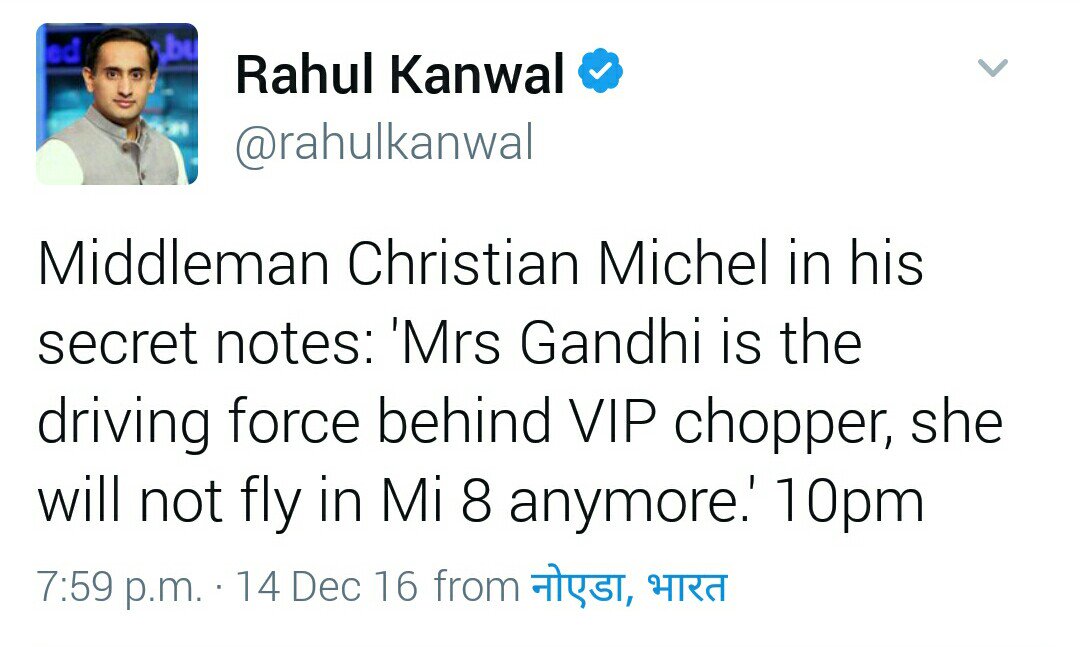 i claim that the middleman is true in this case, but in other case like lalit modi middle man is a lair.
You must log in or register to reply here.
Similar threads
CBI arrests Lt Col in connection with transfer racket at Army HQs
CBI's third big arrest for CWG mess
Customs officials among 8 booked by CBI for e-waste imports through Kochi port
CBI raids NDTV founder Prannoy Roy's home
Share:
Facebook Twitter Reddit WhatsApp Link