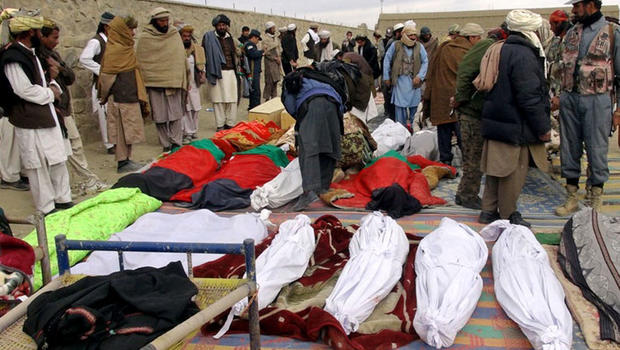 Fifteen more fatalities have been confirmed following a barrage of bombings in Kabul, taking the toll to 51 in the deadliest day for the city in years.

The explosions on Friday, which devastated buildings and overwhelmed hospitals with hundreds of casualties, were the first major militant assaults on Kabul since the announcement of Taliban leader Mullah Omar's death.

The U.N. mission in Afghanistan said Friday was the most violent day since it began recording civilian casualties in 2009, with 355 civilians killed or injured.

The attacks underscored the country's volatile security situation amid a faltering peace process and the potency of the Taliban insurgency.

In the first attack, a powerful truck bomb tore through the centre of Kabul just after midnight on Friday, killing 15 civilians and wounding 240 others.

Less than 24 hours later, 27 cadets and civilians were killed when a suicide bomber dressed in police uniform blew himself up at the entrance of Kabul Police Academy.

Explosions and gunfire also erupted when Camp Integrity, a US special forces base in Kabul, came under attack late on Friday, killing nine people, including a NATO service member.

The Taliban distanced themselves from the truck bombing which struck near a Kabul military base - as they usually do in attacks that result in mass civilian casualties.

But they claimed responsibility for both other attacks, which marked a serious breach of security at a premier training institute for Afghan forces and a foreign coalition facility.

The three assaults made Friday the deadliest 24 hours in Kabul since December 2011, when more than 50 people were killed in a suicide attack during the Shi'ite holy day of Ashura.

'The Afghan people are resilient, but the suffering caused by (these attacks) in terms of civilian deaths, injuries, and the loss of family members, is extreme, irreversible and unjustifiable,' the UN mission in Afghanistan said in a statement.

The carnage highlighted the risk of a bloodier insurgency under a new Taliban leadership as Afghan forces face their first summer fighting season without the full support of NATO, which ended its combat mission in December.

Interesting fact below... Friday is the holiest day for Muslims and Muslims kill Muslims the most on the same day.

The U.N. mission in Afghanistan said Friday was the most violent day since it began recording civilian casualties in 2009, with 355 civilians killed or injured.
Click to expand...

This ghani is idiot and is losing popularity at rapid rate
Afghans hate Pakistan for a reason and he is still trying to involve Pakistan in the so called piece process
Let's pray that some sanity prevail and he steps down
You must log in or register to reply here.
Similar threads
Pakistan Army Retd. General Shahid Aziz killed in Afghanistan
Paki army man killed by cross border attack from Afghanistan
Afghanistan attack: Triple blasts at funeral in Kabul, 20 killed
Afghanistan blast: Suicide car bomb kills 80, wounds hundreds in Kabul's diplomatic quarter
Share:
Facebook Twitter Reddit WhatsApp Link