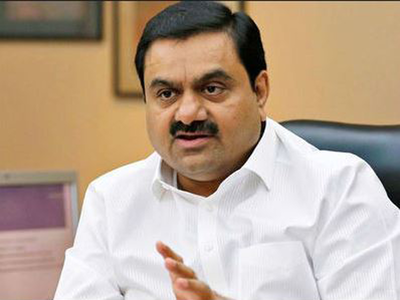 NEW DELHI/MUMBAI: In the largest corporate takeover in the power sector in recent times, debt-laden Reliance Infrastructure has sold its electricity generation, transmission and distribution business in Mumbai run under the Reliance Energy brand to Adani Transmission Ltd in an all cash deal valued at Rs 18,800 crore.
On Thursday, R-Infra, a flagship arm of Anil Ambani's ADAG group, and Adani Transmission announced the signing of a binding SPA (share purchase agreement) to formalize the transaction once regulatory and other statutory approvals are in place.

Reliance Energy caters to close to three million consumers in Mumbai, including two million in the eastern and western suburbs right up to Bhayander. After Reliance hands over the business, its consumers will be billed by Adani Transmission.

R-Infra CEO Anil Jalan told TOI the deal will deleverage the company and leave Rs 3,000 crore surplus funds after clearing its standalone debt of Rs 15,000 crore. "It will help us focus more on construction, infrastructure projects...defence.

With zero debt, we will have easier access to cheaper funds. We are almost the second-largest construction company in the country with an order book worth Rs 10,000 crore," he said.
Recommended By Colombia


The acquisition gives the Adani group a foothold in the distribution business and completes its transition from a generation-and-transmission company into a fully integrated power utility. "We see distribution as the next sunrise sector as India embarks on its mission to achieve 24x7 power for all," a company statement quoted group chairman Gautam Adani as saying.

According to Jalan, R-Infra will get Rs 13,251 crore upfront from Adani the day it hands over the Mumbai power business. This payment will consist of Rs 12,101 crore for the enterprise value of the generation, transmission and distribution business and Rs 1,150 crore for cost claims—known as 'regulatory assets' in industry parlance—already approved by the regulator.

In addition, R-Infra will also get Rs 550 crore, estimated as receivables on the day ownership is switched. Besides, the deal also involves appeals on regulatory claims valued at Rs 5,000 crore, which will flow to R-Infra once the appeals are settled. "We have various ongoing appeals on regulatory assets. All are in advanced stages.

Our deal has taken into account the value of these assets as well. The understanding is that R-Infra will not get this money upfront but as the appeals are settled, the money that is recovered by Adani Transmission on this count will flow to R-Infra," Jalan said.

While initially the company will be paid Rs13,251 crore, about Rs5,000 crore will come into the company’s books after the successful resolution of certain regulatory issues, most likely in 2018-19, Reliance Infrastructure CEO Lalit Jalan told Mint.

He added that the deal is likely to close by March 2018.

The deal will see the Adani Group taking over the distribution of over 1,800 megawatt (MW) of power to roughly 30 lakh customers in Mumbai and 500MW of thermal power generation capacity.

In a statement, Adani Group chairman Gautam Adani said, “We see a massive growth opportunity and will look at both organic and inorganic opportunities to build a market leading distribution company. With this acquisition, Adani Transmission will enjoy benefit of scale and of being an integrated distribution and transmission in India.”

Reliance Infrastructure said the entire proceeds from the sale will be utilized to repay debt, and post the deal, it will turn debt-free. As of September, the company owed lenders well over Rs10,000 crore. “This monetization is a major step in RInfra’s deleveraging strategy for future growth,” the company said in a statement.

The hiving off of the Mumbai power business, however, doesn’t mean the end of the road for RInfra’s power distribution dreams. “We have our Delhi distribution business, which is twice the size of Mumbai distribution,” Jalan said.

The focus of the company, however, is now clearly on its engineering, procurement and construction (EPC) and defence portfolios. “Our main focus area for growth will be EPC and defence. Today, our EPC order book, including the ones where we have been declared L1, is in excess of Rs10,000 crore and in 2-3 years will build up to Rs50,000 crore,” Jalan said. In the quarter ended September, EPC accounted for just 11% of Reliance Infrastructure’s revenue.

The deal between RInfra and Adani Transmission is not the first between the two groups. Back in October, the former had sold its Western Region System Strengthening Scheme (WRSSS) business to the latter for Rs1,000 crore.

Reliance Infrastructure’s Mumbai power business is the country’s largest private sector integrated power utility, distributing power to nearly 3 million residential and commercial consumers in Mumbai and its suburbs covering an area of 400 sq.km. At peak demand, it caters over 1,800 MW of power.