BY : TNN
Shrugging aside some policy glitches and heartburn, India and US are now all set to launch their largest-ever ground combat exercise,

which incidentally is codenamed ‘Yudh Abhyas’ (preparation for war). But it’s really not conventional war that will be the focus of the 15-day wargames, which kicks off at Babina, near Jhansi, from October 12.
‘‘The focus of Yudh Abhyas is on mechanised infantry operations for counter-insurgency/counter-terrorism in semi-urban terrain. The aim is to further enhance interoperability already built through a series of exercises with US,’’ said a senior Indian officer.
Commander of the army forces under the US Pacific Command, Lt-Gen Benjamin Mixon, in turn, said, ‘‘It will be one of the most important training exercises that we’ve done with the Indian military to date…It’s on the high-end of fighting…We’re very excited.’’
The US, anxious to grab a major chunk of the lucrative Indian arms market, will undertake ‘live-fire ops’ of its high-tech weaponry like the Stryker infantry armoured vehicles and Javelin anti-tank guided missiles (ATGMs) during the wargames.
Incidentally, this will be the largest overseas deployment of the Strykers after Iraq and Afghanistan, coming as the over 200 American soldiers are with 17 of the eight-wheeled armoured combat vehicles.
Costing around $1.5 million apiece, the Strykers come equipped with advanced weapons, CBRN (chemical, biological, radiological and nuclear) protection and C4I (command, control, communications, computers and intelligence) systems.
Indian Army, on its part, has also shown interest in acquiring man-portable ATGMs like the Javelin since the indigenous ‘Nag’ ATGM is still to be operationally deployed.
That’s not all in the current phase of the Indo-US military tango. Mid-way through Yudh Abhyas, yet another exercise named ‘‘Cope India-09’’ between IAF and USAF, will begin at Agra on October 19.
In this primarily transport aircraft exercise, the US will showcase its C-17 Globemaster-III giant military aircraft, among other planes. India has already shown interest in acquiring at least 10 C-17 aircraft and 15 Chinook helicopters after inking the $2.1 billion deal for eight P-8i long-range maritime reconnaissance aircraft and the $962 million contract for six C-130J heavy-lift aircraft with the US.

As part of the ongoing Indo-US Defence Cooperation, an Indo-US Joint Exercise YUDH ABHYAS 09 is being conducted at Babina from 12 to 29 Oct 2009, under the aegis of HQ Southern Command. The aim of this exercise to conduct a joint Indo-US training exercise under the framework of agreed joint training programme for sharing useful experience in Peace Keeping operations and humanitarian the disaster relief situations. The scope of the exercise is to conduct Indo – US joint training exercise with CI/CT focus in a semi urban scenario under UNPKO Chapter VII. The following aspects have been incorporated:-

(b) Stability Operations to include mounting and ROE, Mine/Counter IED Operations and Patrolling.

(g) Share and learn form each others experience through combined Military decision making and planning process, and employment of forces.

(h) Promote mutual trust and understanding through the exchange of tactics, techniques and procedures and associated logistics support.

(k) Exercise is planned to be conducted under UN Mandate.

2. Mechanised Infantry Battalion of Indian army and 2nd Squadron of 14 CAV of 25 Stryker Brigade Combat Team (Approx strength of 325 persons) from US are participating in this exercise

Strykers to Deploy to India for Exercise | Army News at DefenceTalk

WASHINGTON: The Army plans to deploy 17 of its Stryker combat vehicles this month to India for the first exercise of its kind in the country.

This is also the largest deployment of the Strykers outside of those sent to Iraq and Afghanistan, Army officials said.

“It’s one of the most important training exercises that we’ve done with the Indian military to date,” Army Lt. Gen. Benjamin R. Mixon said today at a news conference here. Mixon commands all Army forces in the U.S. Pacific Command area.

About 200 troops from the 2nd Squadron, 14th Cavalry Regiment, based out of Hawaii, will train alongside the Indian army in combat maneuvers using the Strykers, Mixon said. An Indian army unit of about the same size will join the Stryker crews in Babina, about 275 miles southeast of New Delhi, for the two-week exercise starting Oct. 12. The two armies will share tactics for using the Strykers in combat, as well as its integrated computer network system, Mixon said.

The exercise will end with a live-fire demonstration of the Stryker.

“We’re very excited about it,” the general said. “We think it’s going to be a good experience for our soldiers, as well as a very important part of our relationship with India.”

This exercise, more than two years in the planning, comes as the Defense Department continues to reach out to India to increase its military collaboration. Pacific Command’s top officer, Navy Adm. Timothy J. Keating, last month traveled to India and said officials there have committed to increasing their military relationship with the United States. Mixon said this exercise will help to build on that relationship and open doors for expanding such training there.

“We view it as a broad effort in our engagement strategy with the Indians that we want to continue to expand. It provides a … method to get at more engagements,” he said.

Mixon said the Indian army is anxious to train with the Strykers. Most military exercises in the country, he explained, have been limited to scenario-driven, commander-level exercises in which few troops are involved. Some of them included unit or troop exchanges between militaries. When U.S. forces join with other militaries in the region, the scenario typically includes both tactical and humanitarian training. This exercise is unique in that it strictly focuses on combat training and does not include a humanitarian piece.

“It’s the full gamut,” Mixon said. “It’s on the high end of fighting.”

The two armies also will share training on how to fight improvised explosive devices. More than half of the U.S. soldiers involved are fresh from a deployment in Iraq, where they dealt regularly with the homemade bomb attacks.

The unit is part of the 25th Infantry Division’s 2nd Stryker Brigade Combat Team, and is slated to return to Iraq within months after this training mission.

“We’ve got a very active engagement strategy with all of the militaries throughout the Pacific region,” Mixon said. “It’s a very important part of what we do.”

For the first time Indian and the US armies will engage in a week-long Brigade level armoured exercise, called Yudh Abhyas, in Babina (UP) from October 12-26, providing the Indian army an opportunity to see first hand the performance of US APCs (armoured personnel carrier) and the ATGM (anti tank guided missile) 'Javelin', which it plans to buy. Said an army officer, that the idea is to validate the use of armoured vehicles in asymmetric warfare, the kind NATO troops are engaged in, in Afghanistan, and also get a feel of the hard equipment with plans to buy them in the future.

The Indian Army, which has made up its mind to buy light tanks for high altitude, also wants to see the US APCs which they would field in the exercise.There are plans to buy light weight tanks, upto 20 tonnes, which could be put up on high altitude, mainly 3rd Division based in Karu, ahead of Leh. More than 250 such tanks are to be bought. The US army uses the American-made portable ATGM 'Javelin', while India's indigenous ATGM 'Nag' is still under final trials and is still to be inducted.

The Indian army's 3rd Division overlooks China, and had just one mechanised infantry unit, with around 52 BMP-2 ICVs (infantry combat vehicles). The battalion comprising the indigenously made BMP-2 infantry combat vehicles (ICV), named 'Sarath', will be the mainstay of this unit, to be raised soon, but the Indian army is looking at APCs used by other armies as well. The ICVs in use currently can be air lifted in the IL-76 aircraft of the Indian Air Force (IAF) as well as can be moved on land at the height of 11,800 feet. They have been deployed for defensive purposes and mainly safeguarding the region. Said an officer that it was still not clear about when the second mechanised unit would come up in the area, but it was in the pipeline and would be most propably deployed in the same region as it was to counter China, adding that the huge Northern Command required another mechanised unit. For the first time the vehicles went ahead of Zoji-La in Jammu and Kashmir in 1948 and are quite capable of operating in mountaineous regions.

Recent activities by China in Chumar area of Chushul, have made New Delhi sit up and increase their assets in the region.

The mechanised battalion, which came up in the mountaineous region for the first time in 1986, uses surface-to-surface missiles and guns which can hit a flying chopper too. The battalion carries out annual exercises using the BMPs in Wari-La region in Pangong, which is situated at an altitude of 16,600 feet, the highest point at which the ICVs can go upto.

The BMPs are also APCs and can carry atleast 10 people at one time in the rear of the vehicle.

The US army's mainstay are the M113 APCs, capable of air-lift and air-drop and also amphibious operations. Also called battle taxis these vehicles can carry upto 11 soldiers, apart from the operating crew. They can engage in offensive action as well as transport troops.

The exercise to conclude on October 26, will have the Indian side fielding its BMPs to the tune of one unit strength. A senior army officer told People's Post, "The NATO forces in Afghanistan have been engaged in an indirect war, which is why they want to see the Indian army operating in an urban terrorism environment, which is somewhat similar to what they are facing there. Asymmetric warfare, urban terrorism and use of APCs effectively are some aspects which would be validated in this exercise."

Babina houses the 31 Armoured Division of the Indian Army and a brigade-level assets would be participating in this exercise, of which one would be a mechanised infantry unit.

There have been regular exercise with the US army at different levels. Added an officer, "Starting from the highest level, we are having it at each level, bringing it down. In the past we have had it at the Corps and Division levels, therefore now it is being carried out at the Brigade level." 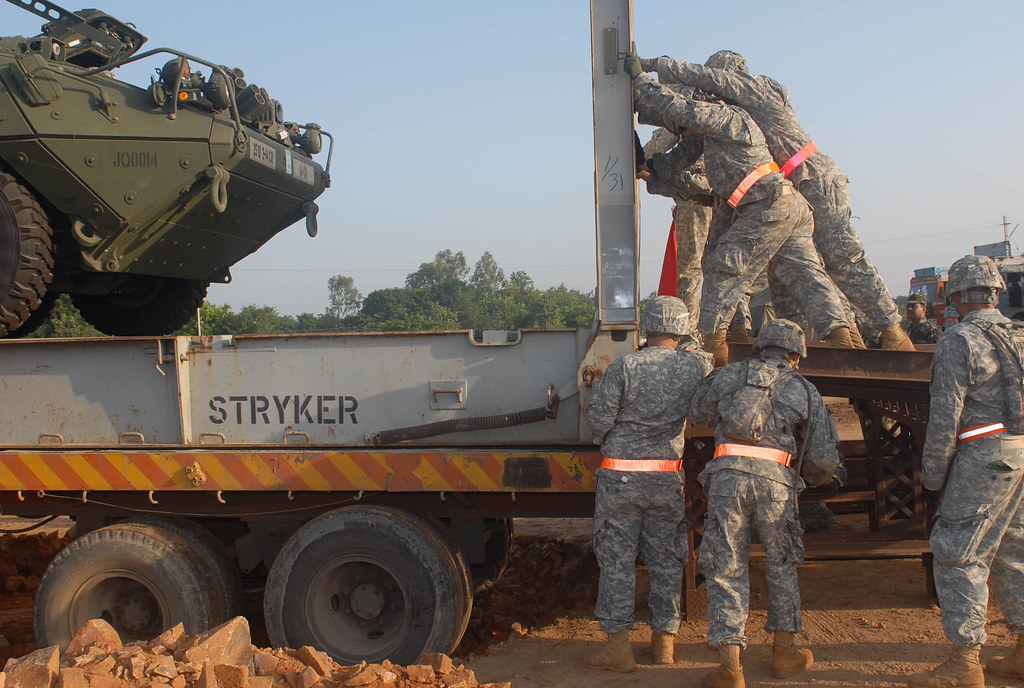 Soldiers assigned to 2nd Squadron, 14th Cavalry Regiment "Strykehorse," 2nd Stryker Brigade Combat Team, 25th Infantry Division, from Schofield Barracks, Hawaii, prepare vehicles for unloading in preparation for Exercise Yudh Abhyas 09 in Babina, India, Oct. 10. YA09, which is scheduled for Oct. 12-27, is a bilateral exercise involving the Armies of India and the United States. The primary goal of the exercise is to develop and expand upon the relationship between the Indian and U.S. Army. 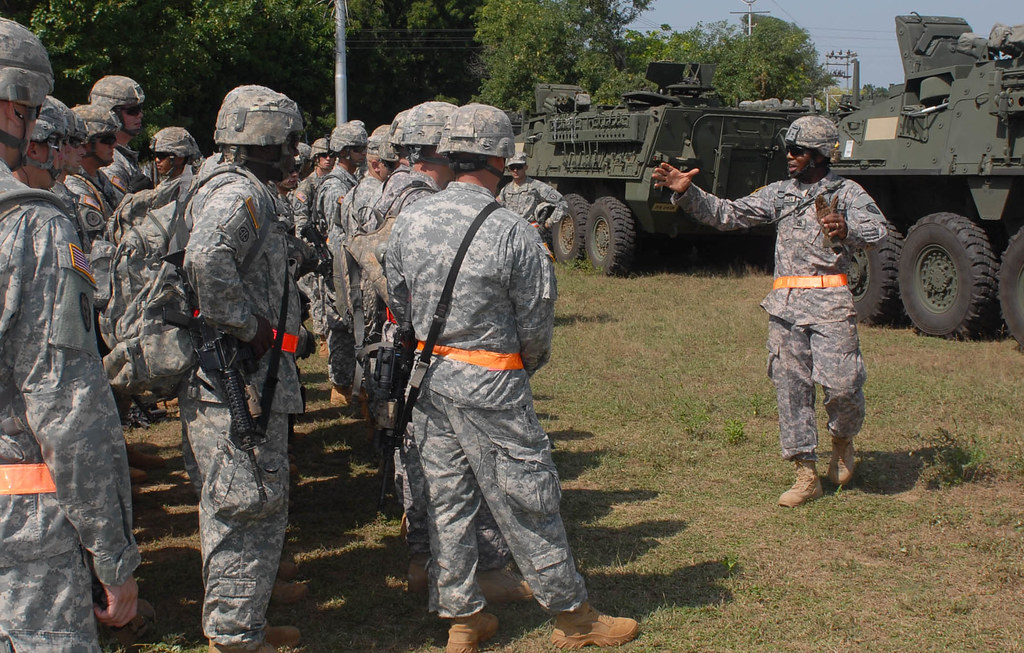 First Sgt. Devin Winnegan, senior enlisted Soldier for Troop B, 2nd Squadron, 14th Cavalry Regiment "Strykehorse," 2nd Stryker Brigade Combat Team, 25th Infantry Division, from Schofield Barracks, Hawaii, addresses Soldiers with safety matters for driving their recently unloaded Stryker vehicles. The squadron is preparing for Exercise Yudh Abhyas 09 in Babina, India, Oct. 10. YA09, which is scheduled for Oct. 12-27, is a bilateral exercise involving the Armies of India and the United States. The primary goal of the exercise is to develop and expand upon the relationship between the Indian and U.S. Army. 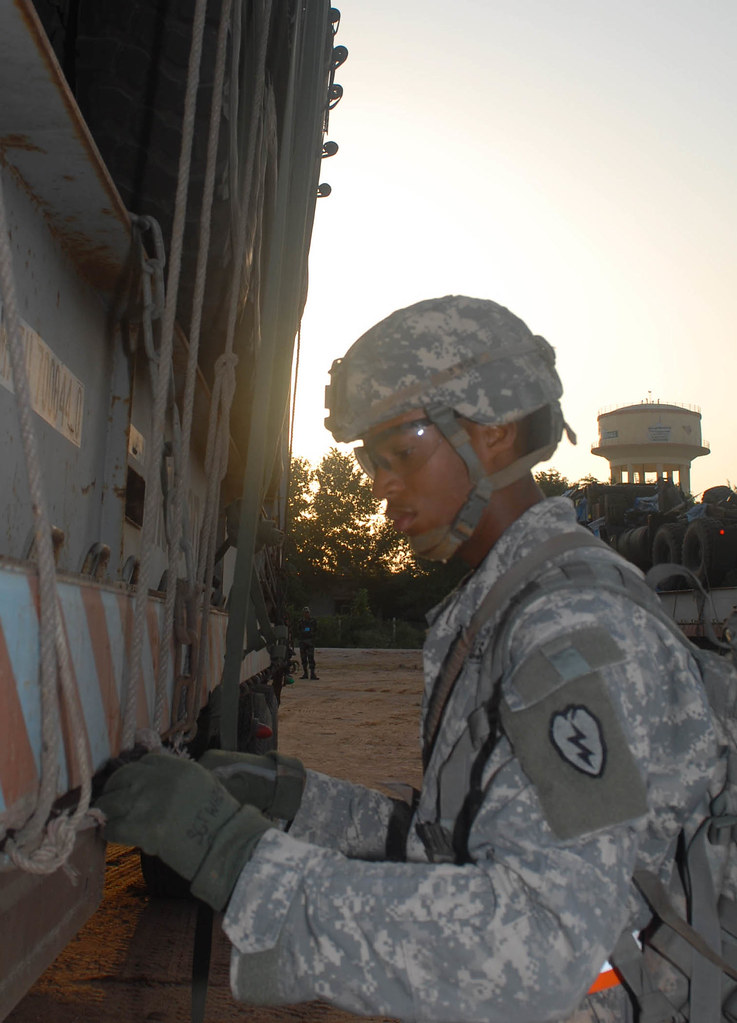 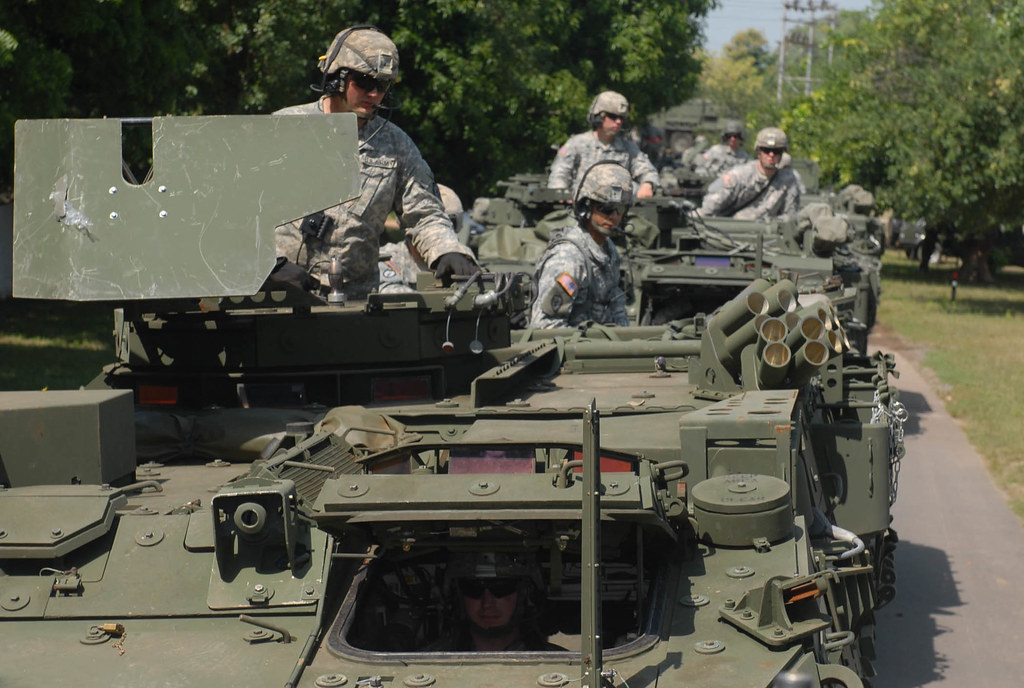 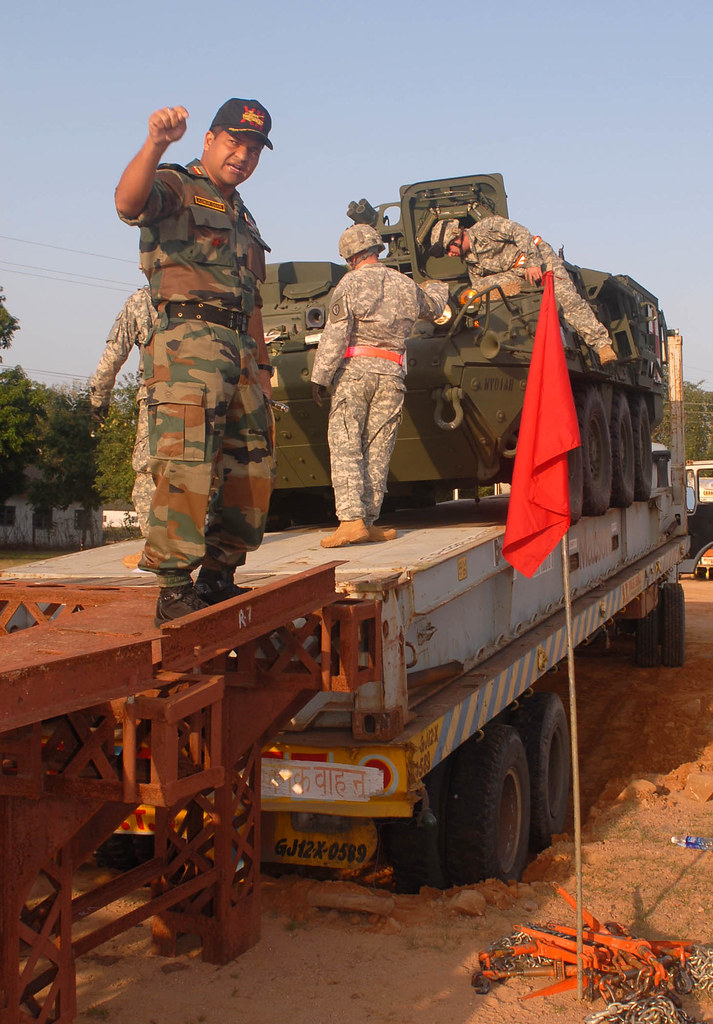 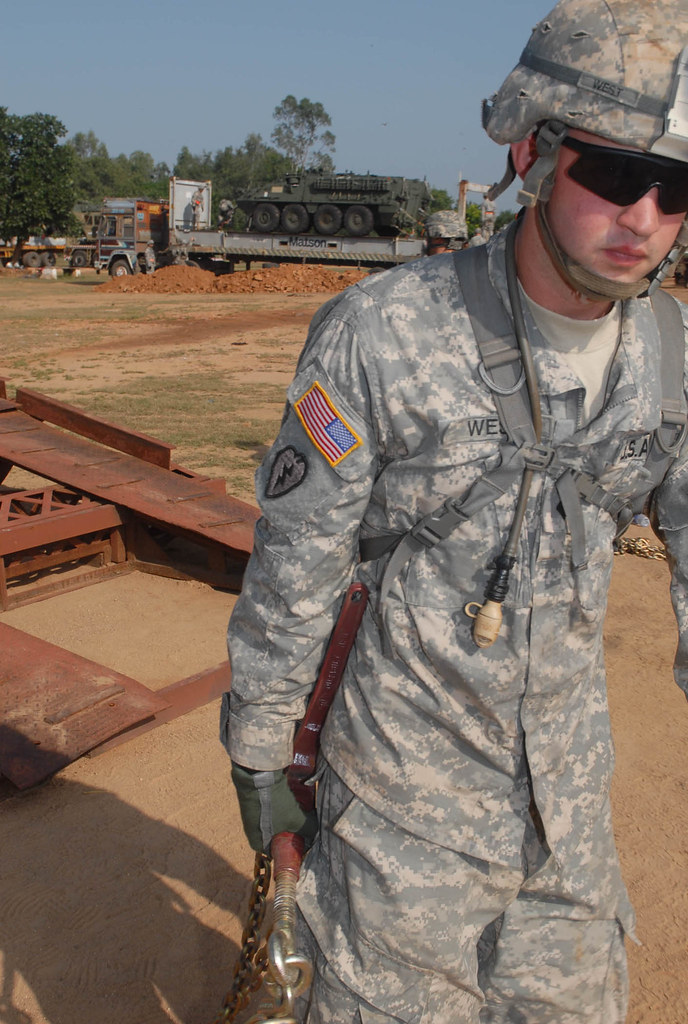 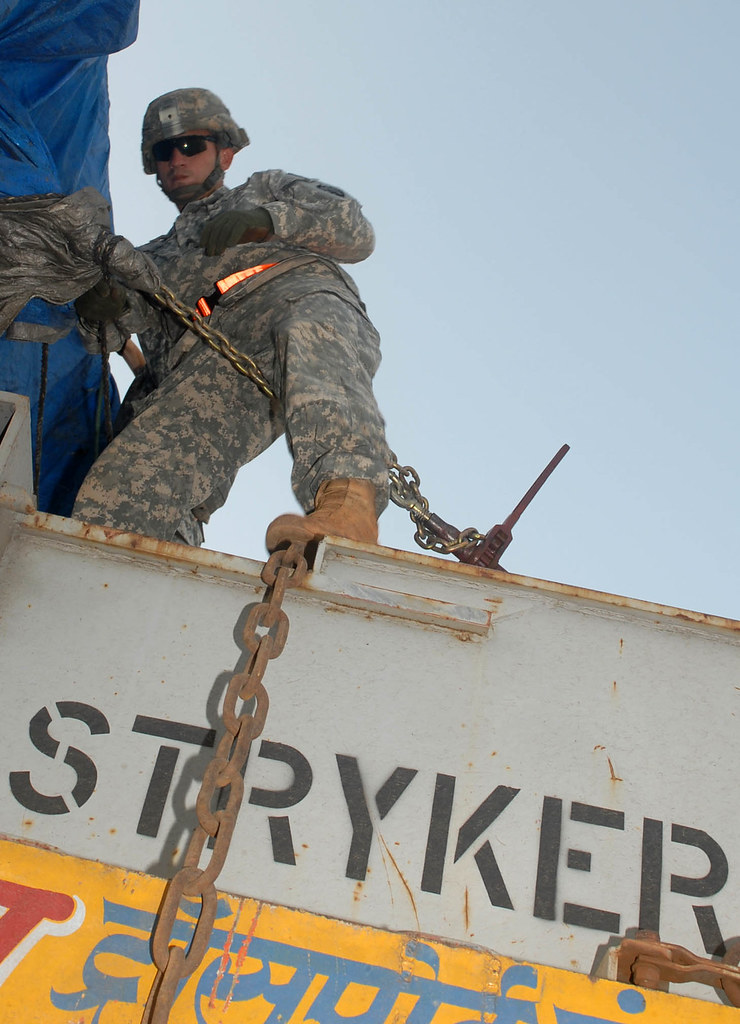 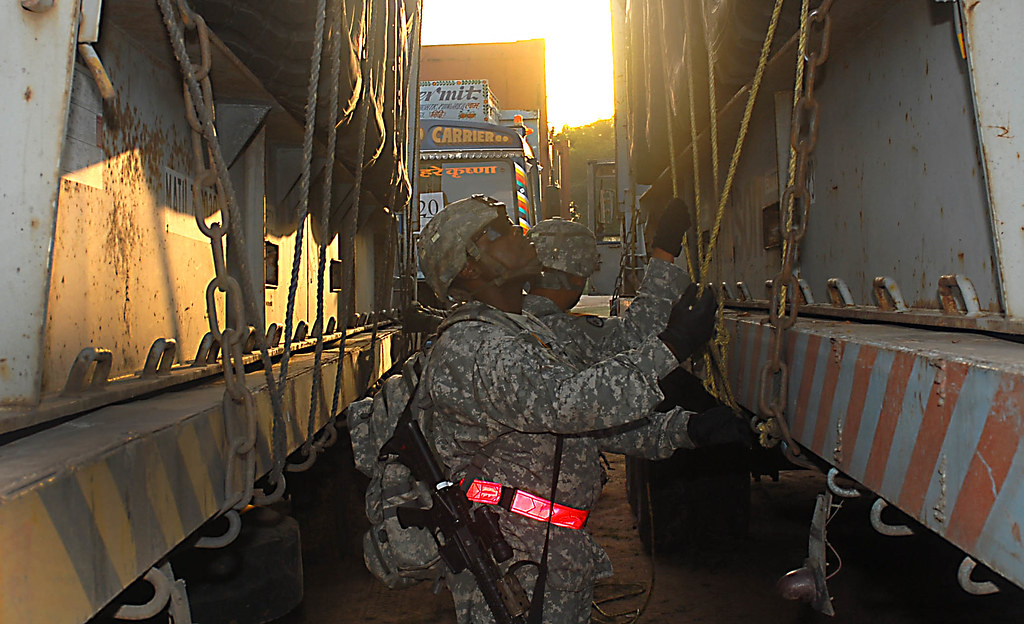 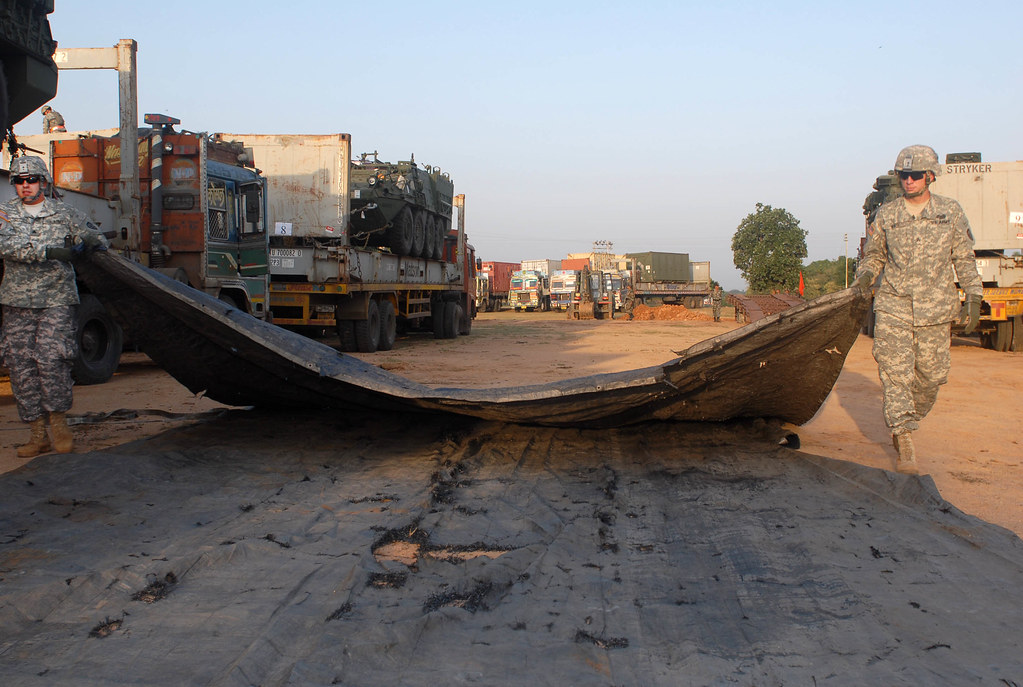 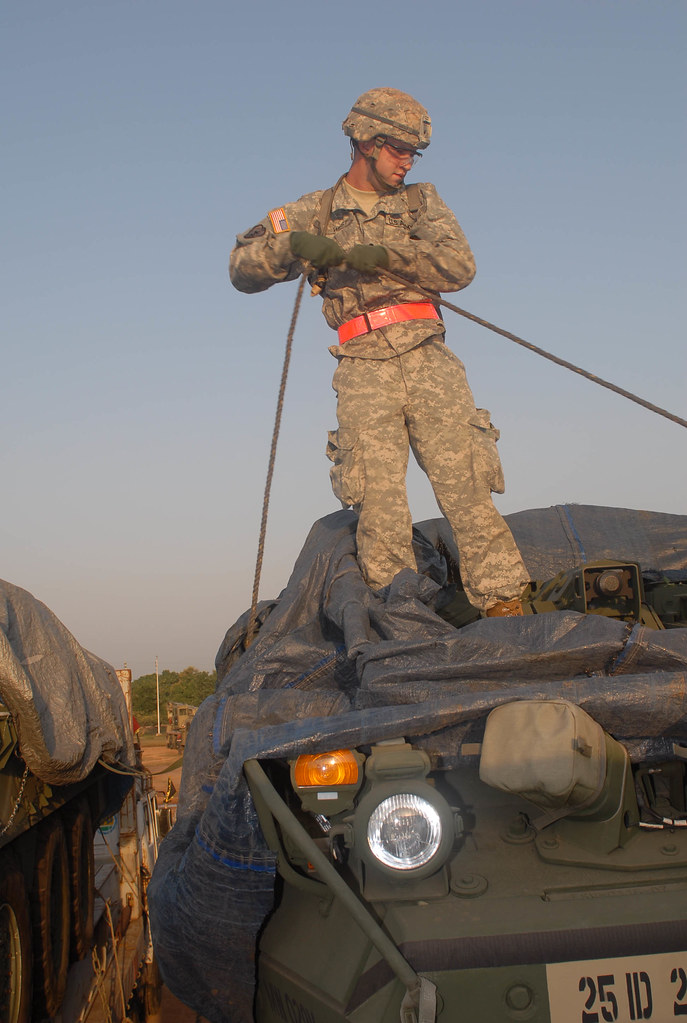 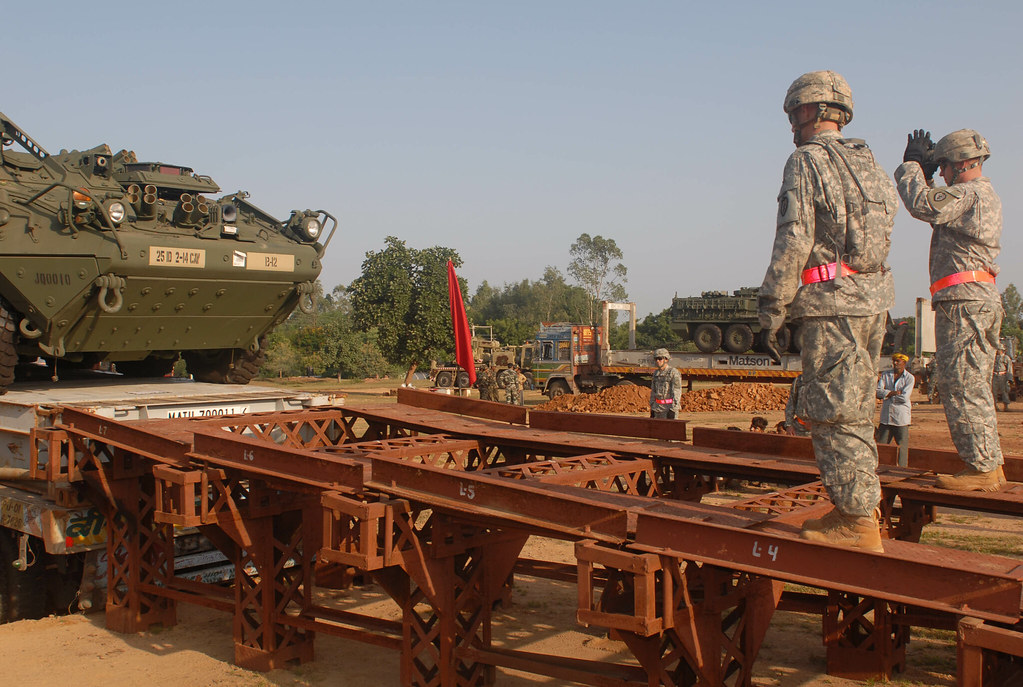 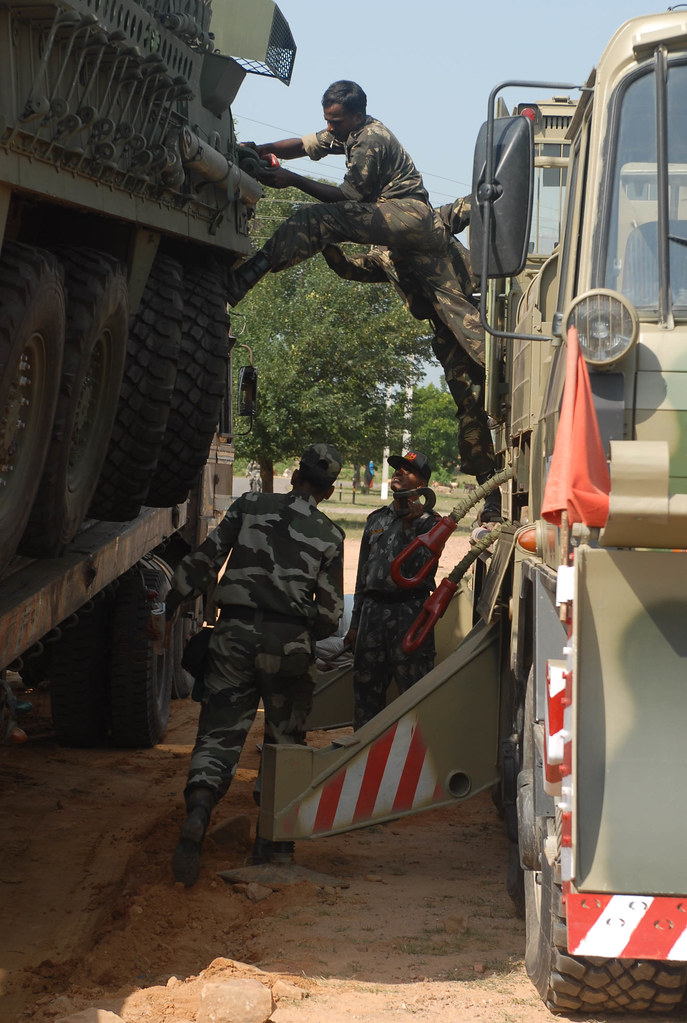 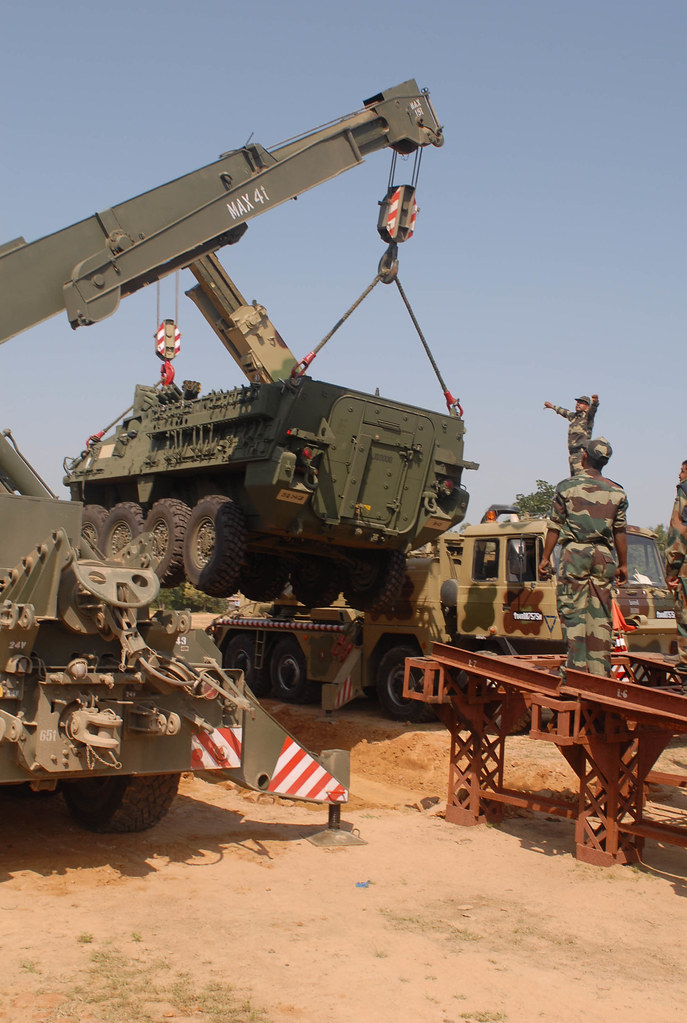 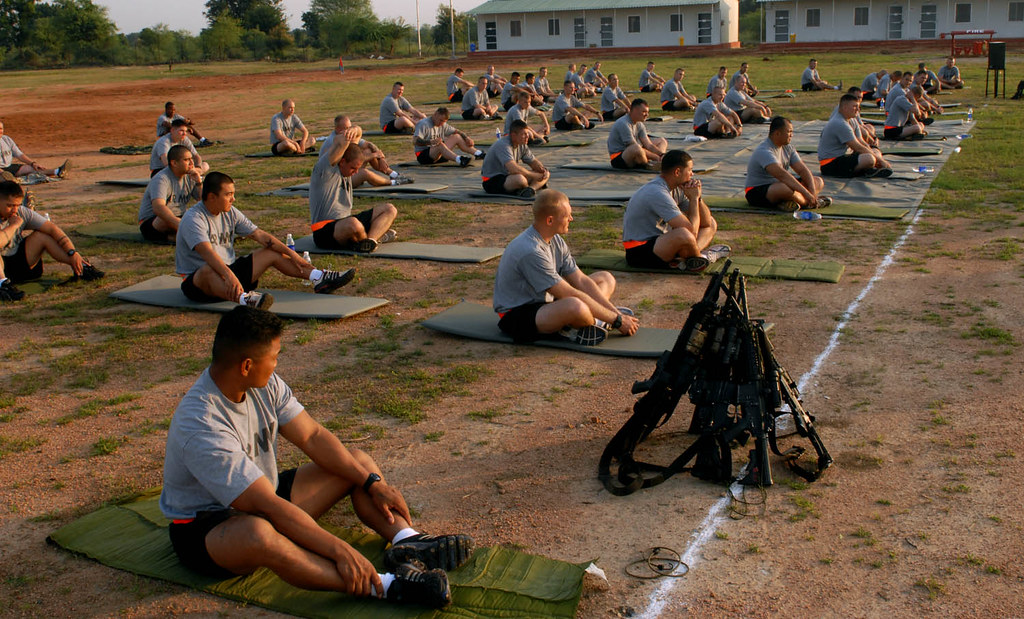 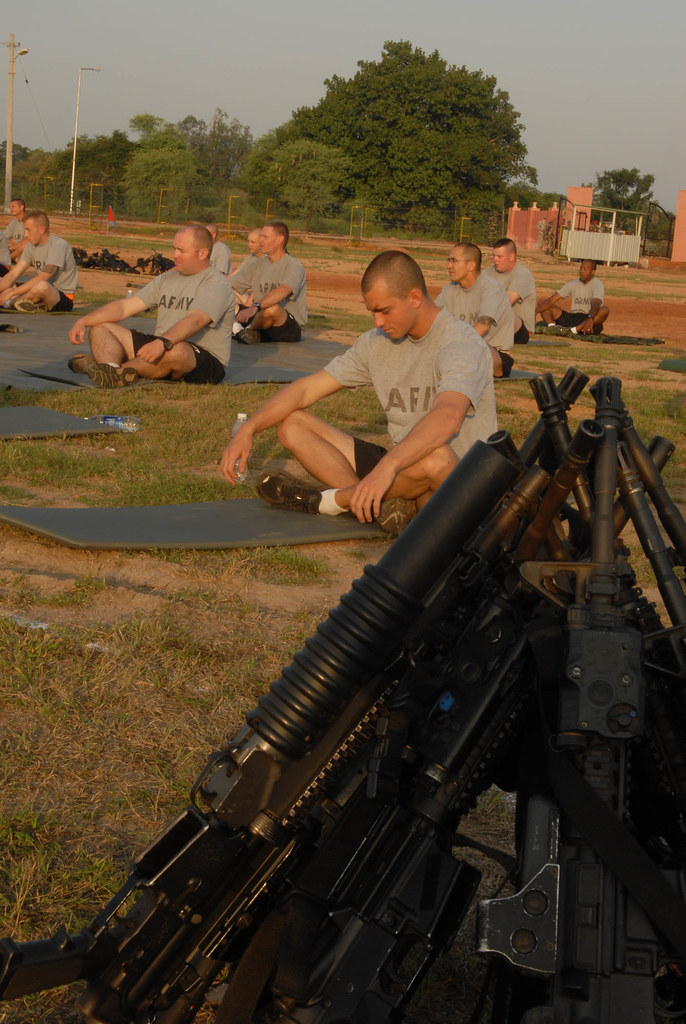 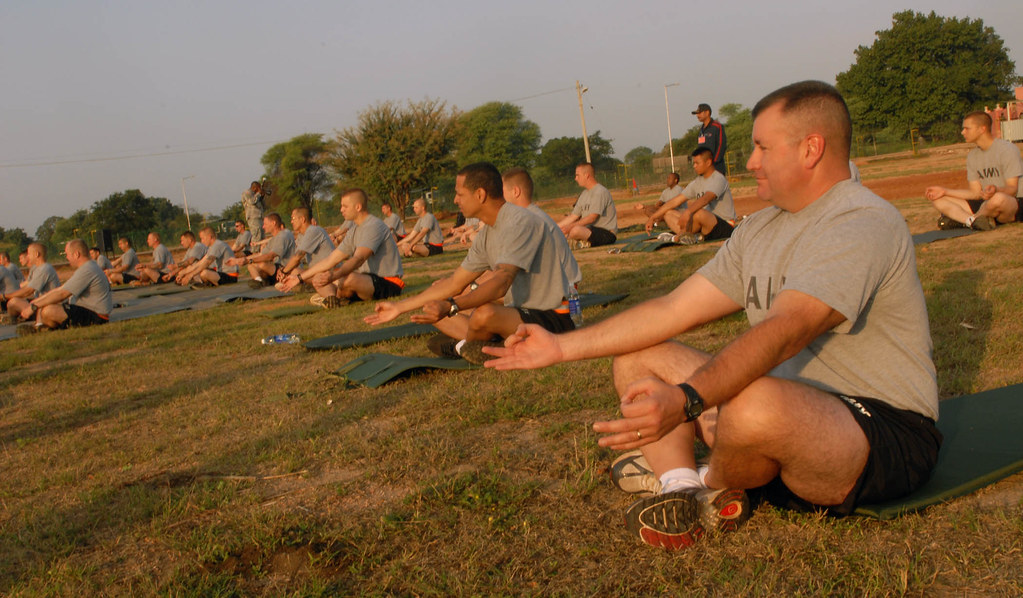 oldiers assigned to Troop B, 2nd Squadron, 14th Cavalry Regiment, "Strykehorse," 2nd Stryker Brigade Combat Team, 25th Infantry Division listen to a yoga instructor during their yoga session at Camp Bundela in Babina, India, Oct. 11. The instruction is part of a cultural exchange between the Indian Army and the U.S. Army. 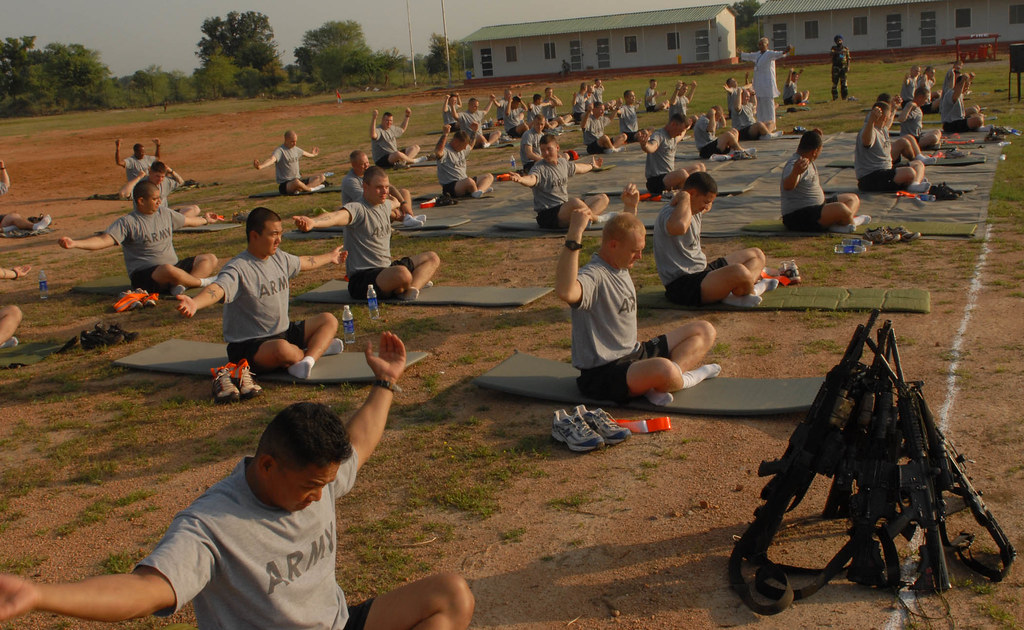 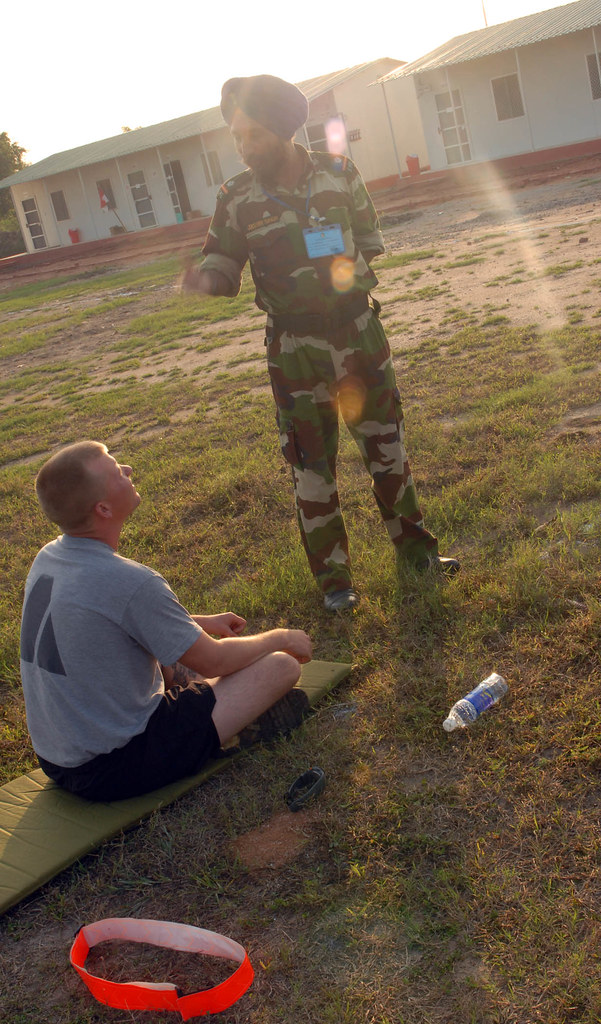 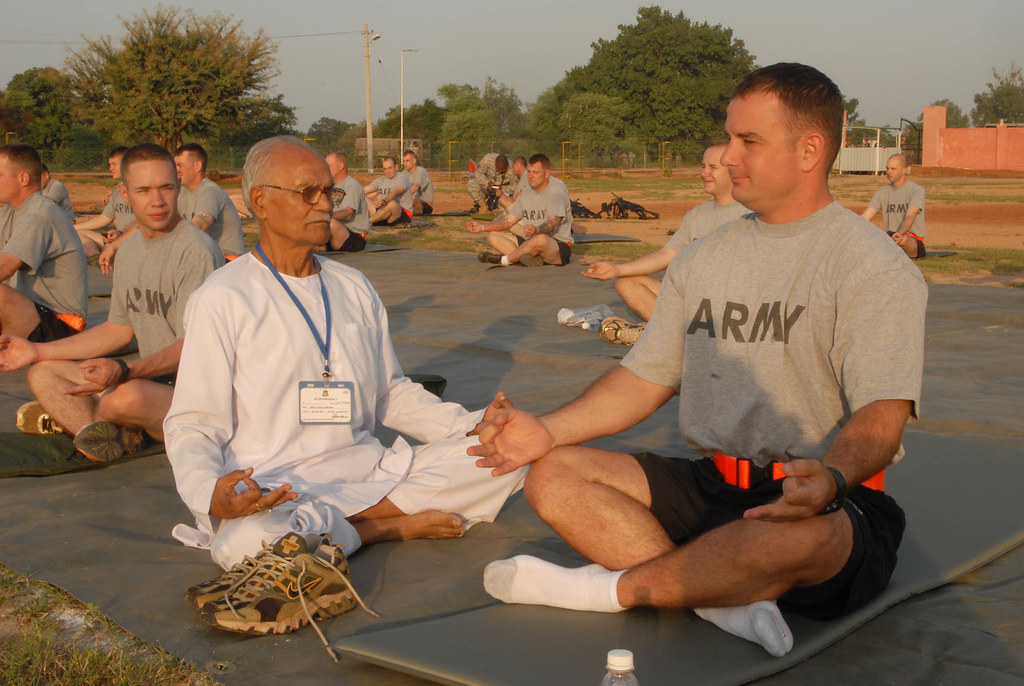 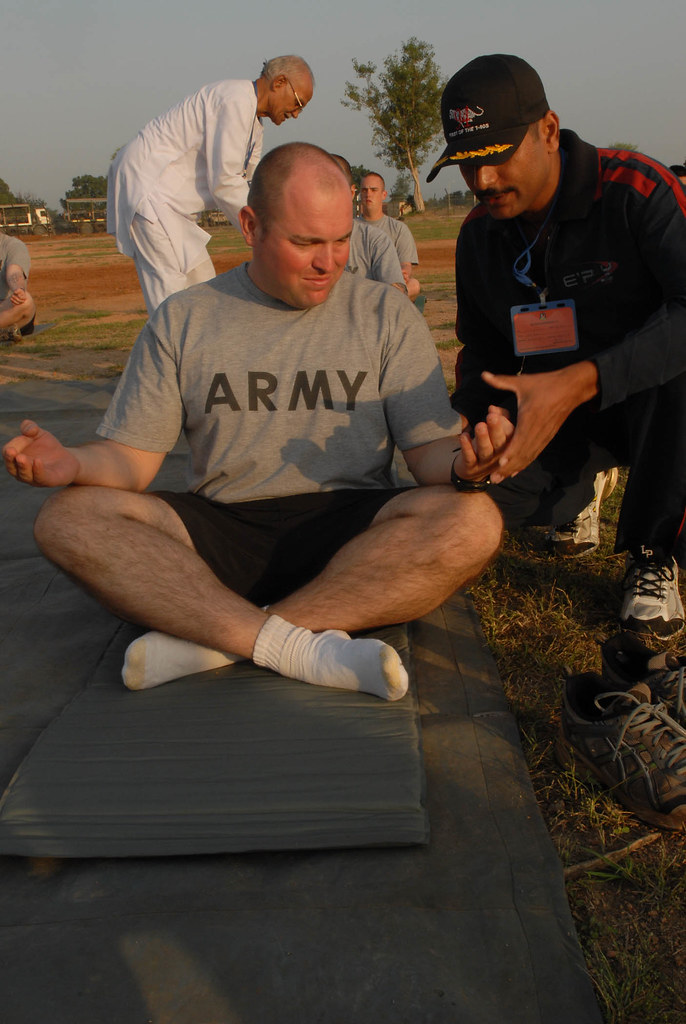