War of the French Thermals 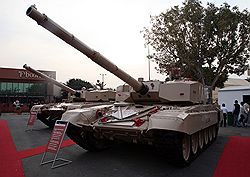 Franco-Russian military-technical cooperation was resumed in mid-1990's. "Instigator" was made by India, wishing to equip their Air Force the best fighter in the world. And so it seemed a combination of Russian and French avionics platform. At the request of the customer received the Su-30MKI inertial navigation system of Sigma 90 laser gyroscope company Sagem and multifunctional liquid crystal displays firm Thales. Then, Sigma 90 and Helmet sight Thales TopSight appeared on MiG-29K/KUB.

His contribution to the "ofrantsuzhivanie of our fighters has made Malaysia. Vyprosiv from Russia "Indian option" as the basis of its own Su-30MKM, Kuala Lumpur demanded Israel to replace the light on the background of the French windshield and integrated into the "starboard" hanging container target Damocles.

In autumn 2007, Moscow was visited by a delegation led by Thales executive vice president of commercial and office security systems Olivier Ussenom. Then he told BG, which is configured to work with the company "Rosoboronexport" in India to promote the fighter MiG-35, modernization of MiG-29 and armored vehicles. "In the summer of 2007 we signed the first contract to supply our systems to the Russian market", - told Mr. Ussen.

Now Thales delivers Gazprom management flows of liquefied natural gas, RAO Russian Railways - train control systems. The firm is ready to participate in a complete set of prospective cruise ship MS-21. According to Mr. Ussena, the increase in sales will be accompanied by the transfer of technology and managerial expertise. Organization of joint ventures "have not yet been considered for reasons of technical and economic nature." In doing so, Thales intends to establish a Russian office, which will be the adaptation of "global products" to the peculiarities of the Russian market, mainly due to changes in the software.

Russian Defense Ministry orders sought their own little place on a "purely Russian" complete, perhaps by agreeing to the use of foreign components. However, certification testing of new and upgraded combat systems (as they are specialized centers of the Ministry of Defense of Russia in their own interests and for foreign customers) have shown that in selected areas, domestic producers hopelessly behind on the world level in some areas of electronics and microelectronics, including electrical systems, optical and night vision devices.

Russian Urals Optical and Mechanical Plant "(UOMZ) has developed its own hanging container Sapsan" (for round-the-clock precision-guided bombs on the target adjusted for missiles and aircraft families MiG and Su). However, the aggregate performance, as well as the degree of readiness for serial production, it lagged behind the French product Damocles.

This has spurred the negotiations to equip the aircraft the Air Force Russia French hanging containers. Presumably we are talking about fighters Su-27SM2, front-line bomber Su-24M2 and Su-34.

In the middle of last year, the parties tentatively agreed on the licensed production. Damocles has all chances to become the first foreign attack system development, which will be replicated in our country "in white." It was first on the screw assembly, then the full localization of production. Software Russian version will be written by local experts. Defense industry enterprises will make even a key element - the matrix, the host echoes.

In June 2007, Sagem and UOMZ signed an agreement on the joint venture. This joint venture will manufacture and after service in Russia of French thermal cameras last generation. "The establishment of the enterprise will be supported by the Russian and the French government", - reported on UOMZ. The French Chamber, providing round-the-clock search and discovery purposes, the definition of their coordinates, and automatic accompaniment, as well as the crucial problem of sight, and control precision weapons, will be integrated into the Russian platform - the T-90, BMP-3 might BMD-4.

Meanwhile, in August 2007 Sagem announced the decision to establish a joint venture with Ramensky Instrument Design Bureau in the development and production of inertial navigation systems for combat aircraft.

The signing of agreements on licensed production has coincided with a straight purchase. In mid-2007 it was reported on the agreement between Thales and the company "Rosoboronexport" for the supply of 100 Catherine FC thermal cameras to be installed on the tanks T-90 Ground Forces of Russia. The authoritative British publication Jane `s Defence Weekly in the September issue has published an article with quotes a source at the firm, who called the sale" a decisive step "to expand the geography of sales, and expressed the hope that it will attract investment into the Russian economy and the development of cooperative ties between Thales and local industry. Confirmed in the Defense Ministry did not comment on the contract. Information about him was disclosed to Thales, and through the "brain" and through the commentary "representatives" without specifying names.

However, on 20 March gosposrednik in the arms trade "Rosoboronexport" has circulated a message on the director Anatoly Isaikina * talks with Thales. This, in particular, was the organization of the service center for maintenance and repair of thermal cameras on the basis of JSC "Vologda Optical and Mechanical Plant", as well as on issues of technology transfer and creation in the territory of Russia a joint venture for production of thermal cameras. The report quoted the words of Mr Isaikina * that "the partnership relates to the supply of thermal cameras of French production, members of the military products of the Army for the benefit of foreign customers, and the Ministry of Defense of Russia."

According to sources in the Russian industry, the French thermal exceed domestic for a number of parameters, including the corner of the review, range, image quality and reliability of the technology. According to these sources, in turn, leads UOMZ project with Sagem to localize the production of infrared device front review Matiz. It is the Russian-French joint venture with equal shares of the authorized capital. As Catherine FC, Matiz is designed to equip the armored vehicles.

Armored vehicles equipped with sophisticated infrared system makes it possible to use it around the clock, allowing the crew to pinpoint the fire at night and the conditions of artificial disturbances (smokescreen).

His appearance on the Russian tanks thermal French customers are required to third countries. In the early 1980's, India has agreed with the Soviet Union on the licensed production of 2 thousand is very powerful for the time T-72. For all parameters are superior to T-59 Chinese-made, ordered by Pakistan in the amount of 1.5 thousand

At the same time, Delhi has started developing its own tank, Arjun ( "Arjun"). Military specification formulated in 1995. Preparation of the production started in March 2000 to enable full-scale assembly "Arjun" in the factory in the city Awdi started at the end of the licensing program. Army ordered the installation batch of 124 machines, with the first summer of 2006.

Meanwhile, in the late 1990's Pakistan has acquired 300 Chinese T-85 and 320 T-80UD Kharkov factory, and then through Ukraine and China has developed its own production MBT Al Khaled ( "Khalid"). To date, they built about three hundred. New Pakistani tanks are equipped with modern thermal, on aggregate performance far superior system, night vision of Indian T-72.

Military preparations Delhi persuaded Islamabad to issue a "Rosoboronexport", in 2001, an order for 310 T-90S, valued at about $ 800 million of which 124 have been prepared, and 186 were collected (from 2004) in Awdi of sets of "Uralvagonzavod (Nizhny Tagil). To outbid the characteristics of the T-80UD, Indians demanded to replace the standard engine T-90 in forced thousands to 1 liter. with. (due to turbo) diesel V92-C2 and Russian IR device - at the Catherine FC. At the same time, Delhi tried to save your own project. The industry has received additional money and time to bring the chassis and the authorization to issue "transitional product" - hybrid Ex Tank, cross T-72 chassis with a tower "Arjun".

Pakistan made a retaliatory move by entering into a contract with Thales for 900 Catherine FC with deliveries beginning in March 2007. They are intended for the new "Khalidov and modernized T-85. In parallel, start the program of modernization of 600 T-59 version of Al Zarrar ( "Zarrar"), equipped with night vision Thesis second-generation Italian company Galileo Avionica. Islamabad has led negotiations with Sagem for installation at Khalid-2 thermal third-generation Matiz.

The next round of Tank "war" occurred in November 2007. India issued the "Rosoboronexport" a contract worth more than $ 1.2 billion on 347 T-90S. Agreed on a program for licensed assembly plants Ordnance Factory Board (OFB) in Medak and Awdi 1 thousand T-90SK, the supply of 50 in 2009. And in February of 2008 Defexpo Thales announced a new Indian order for 400 Catherine FC. Presumably, for the equipping of hybrid tanks (T-90S Russian suppliers are completed independently). In addition, the French planned to install the thermal upgraded T-72M1 and BMP-2K.