Inviting all serious discussion on measures required, being taken, and their adequacy - or lack thereof - to tackle this issue: private and public, as well as hydrostatic details and technical assessments of the issue at hand ('seriousness', not necessarily equated with punctilious accuracy).


Parts of India are on track for severe water shortages. according to results from Nasa's gravity satellites.

The Grace mission discovered that in the country's northwest - including Delhi - the water table is falling by about 4cm (1.6 inches) per year.

Writing in the journal Nature, they say rainfall has not changed, and water use is too high, mainly for farming.

The finding is published two days after an Indian government report warning of a potential water crisis.

That report noted that access to water was one of the main factors governing the pace of development in the world's second most populous nation.

About a quarter of India is experiencing drought conditions, as the monsoon rains have been weaker and later than usual.

But weather and climatic factors are not responsible for water depletion in the northwestern states of Rajasthan, Haryana and Punjab, according to the Nasa study.

"We looked at the rainfall record and during this decade, it's relatively steady - there have been some up and down years but generally there's no drought situation, there's no major trend in rainfall," said Matt Rodell, a hydrologist at Nasa's Goddard Space Flight Center near Washington DC.

"So naturally we would expect the groundwater level to stay where it is unless there is an excessive stress due to people pumping too much water, which is what we believe is happening."

The Grace (Gravity Recovery And Climate Experiment) mission uses two satellites flying along the same orbit, one just in front of the other.

Minute differences in the Earth's gravitational pull cause the two craft to shift slightly in their positions relative to one another.

The mission can measure groundwater depletion because the amount of water in aquifers has a small gravitational attraction for the satellites.

Three years ago, Grace scientists noted a loss of water in parts of Africa - but the Indian result is more striking.

"Over the six-year timeframe of this study, about 109 cubic kilometres of water were depleted from this region - more than double the capacity of India's largest reservoir is gone between 2002 and 2008," Dr Rodell told the BBC. 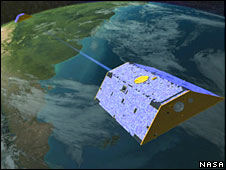 The Grace satellites provide a
twin eye on Earth gravity​

The northwest of India is heavily irrigated; and the Indian government's State of the Environment report, published on Tuesday, noted that irrigation increased rice yields seven-fold in some regions compared to rain-fed fields.

Dr Raj Gupta, a scientist working for the International Maize and Wheat Improvement Center (CIMMYT), said that the current drought would lead to more groundwater extraction.

"Farmers receive no rains so they are pumping a lot more water than the government expected, so the water table will fall further," he said.

"The farmers have to irrigate, and that's why they're pumping more water, mining more water. The situation has to stop today or tomorrow."

Dr Gupta noted that some farmers might be able to switch from rice to crops that demand less water, such as maize or sorghum.

But, he said, that would depend on government policies - which have traditionally promoted rice - and on market demand.

Climate change is likely to be a constraint too, with the area of South Asia suitable for wheat forecast to halve over the next 50 years.

The Impending Water Crisis in India

Rainwater harvesting is something that can go a long way.

Above all judicious use of water by all would go a long way.
N

Rage said:
Climate change is likely to be a constraint too, with the area of South Asia suitable for wheat forecast to halve over the next 50 years.
Click to expand...

This last sentence from the article is chilling. The article doesn't elaborate on that, which is infuriating. What type of climate changes will occur? How will that affect the land in question?

ant80 said:
This last sentence from the article is chilling. The article doesn't elaborate on that, which is infuriating. What type of climate changes will occur? How will that affect the land in question?
Click to expand...

The article says "South Asia." What regions would become inhospitable towards wheat production? What percentage of that is in India?

ant80 said:
The article says "South Asia." What regions would become inhospitable towards wheat production? What percentage of that is in India?
Click to expand...

The entire region of the Punjab in Hind and Pakistan [owing to the large exisscation of ground water], the Sindh east of the Indus [the former and latter both owing in large part due to inefficient irrigation, abysmal urban sanitation, catastrophic environmental degradation, lack of water laws to define water rights and lack of a sound policy on large-scale dams], Rajasthaan [owing to soaring temperatures, even though it presently is a dry state], the Ganges-Brahmaputra delta and Indo-Gangetic plains [owing to the recession of the Himalayan glaciers] to put it in a nutshell.


Refer to the ''Australia's Dry Run'' article in the April 2009 issue of the National Geographic for an also global perspective on the Water Crisis. India, and South Asia at large, actually seem to have better prospects in the long run than most other regions of Africa, Oceania and Asia.
A

guyz does Govt subsidize drip irrigation systems for poor farmers? or probably give away them for free in regions where rain is below average. that would save lot of water.

Chatan Singh with his failed crop in Haryana.

Seriously we need have effective water conservation. it going to be crisis soon. even for drinking

here is the expert report for Costal Water crisis

But for years India has been toying with the idea of linking all it's rivers.

Smaller dams and reservoirs across the river stream and diversion of water from these into small canals for irrigation will solve the problem. This should solve the problem as it will increase the capacity to store more water during rainy season which can be use in summer. The aim should be to not let go river water into the sea wastefully.

India has the whole Indian Ocean,Bay of Bengal, part of Arabaian sea etc. India can setup desalinization plants in all the coastal areas?? Countries like Saudi Arabia has had much success with these plants

There is a massive desalination plant coming up or I think it's operational in chennai. But it's very expensive. Cannot be implemented on a large scale. Unless off course you have loads of petro dollars.
A

Yusuf said:
There is a massive desalination plant coming up or I think it's operational in chennai. But it's very expensive. Cannot be implemented on a large scale. Unless off course you have loads of petro dollars.
Click to expand...

Any idea on the capital investment required for these types of projects? There's the eternal Kaveri conflict between TN and Karnataka. Having lived in Chennai, I can tell you that there is the Cooum ditch that runs through Chennai. It smells so gross even when we cross the river over a bridge in a bus, everybody can be seen covering their nose. I feel sorry for the ghetto folk that live on the river banks. Is it possible to clean that up to non-health-hazard levels?

Rivers of India wikipedia page gives a very detailed map of rivers in India. Wikipedia also has a page for the linking of the Indian rivers. Does anyone know what stage it this project in? The BJP started this in 2003, but has the Congress party continued the project? The capital investment required for this is 115billion USD.
You must log in or register to reply here.
Similar threads
Rising Iranian-Pakistani tensions render Pakistani policy unsustainable
Palestinian economic growth unsustainable
US biggest contributor of unsustainability: Jairam Ramesh
Sounding Rockets of India
Share:
Facebook Twitter Reddit WhatsApp Link