the ongoing quest for a national war memorial 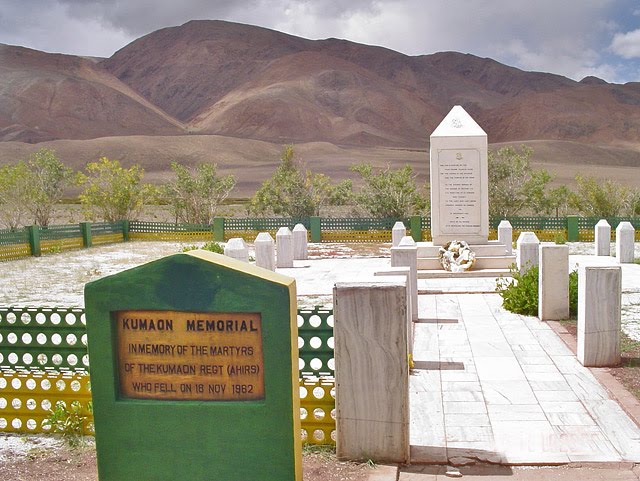 The Rezangla feature, which dominates the approach to Chushul, was defended to the end by 112 men of 13 Kumaon against a Chinese advance in 1962. This memorial to those brave men, led by Major Shaitan Singh, Param Vir Chakra, was built near Rezangla by 13 Kumaon.
by Ajai Shukla
Business Standard, 23rd March 2010

Amongst the many issues that scar relations between India’s military and its civilian overseers — pay scales and pensions; the failure to buy adequate weaponry; and the military’s marginalisation in framing security policy, to name a few — the most easily resolved is the military’s longstanding demand for a national war memorial to honour the 20,000 soldiers, sailors and airmen who have sacrificed their lives while defending independent India. A broad section of the urban public echoes this plea.

The demand is for a prominent memorial on New Delhi’s Central Vista, which can be visited freely by the Indian public, and where wreathes can be offered by national leaders on occasions like the Republic Day, and by visiting foreign dignitaries who choose to do so. The current memorial, the Amar Jawan Jyoti, is merely an add-on to the India Gate, an imposing 42-metre high British structure, built in 1921, to honour the 90,000 Indian soldiers who died in the First World War.

The irony is evident: the British exalted the memory of Indians who died for the empire; but India finds it bothersome to suitably commemorate those who fell in service of the republic.

Anyone who has travelled along India’s borders with China and Pakistan cannot have missed the lonely memorials at the places where Indian troops fought and died. Amongst the most stirring is the stark monument to Major Shaitan Singh and his 111 Kumaoni soldiers who battled to the last, holding up a major Chinese advance on the desolate, windswept plateau of Chushul. This Indian hero, a winner of the Param Vir Chakra, is honoured only in that unvisited war memorial near Chushul. No national memorial is inscribed with the name of Major Shaitan Singh.

The proposal for a “National War Memorial”, as I accidentally discovered in the Assam state archives in Guwahati, predates independent India. A confidential memo, issued on March 3, 1945, from the War Department in New Delhi (in File No. 110-C/45, entitled “Indian National War Memorial”, in the Governor’s Secretariat, Confidential Branch) declares that the Government of India (GoI) has been examining “the question of the form that an Indian National War Memorial should take”. The memo orders that “the establishment of a Military Academy on the lines of the United States Military Academy at West Point for the education and basic training together of future officers of the Royal Indian Navy, the Indian Army and the Indian Air Force would be the most suitable form for the memorial to take”.

In short, New Delhi proposed that what was to become the famous National Defence Academy (NDA), which is still the bedrock of Indian officer training, would also serve as India’s National War Memorial.

The British government of India further proposed that “funds for the academy would be provided by public subscription and supplemented by the state”. It urged all provincial governments (as state governments were then called) to support the scheme, establish scholarships, encourage the public to contribute, and to not set up any other war memorials so that the support of the public “may be concentrated on the all-India (war memorial)”.

Shortly afterwards, as the Second World War hurtled towards its denouement in Hiroshima and Nagasaki, the War Department in New Delhi directed (vide memo No. F.65/45/W.1, dated June 15, 1945) that the construction of the academy be financed from a gift of 100,000 pounds, received from the Government of Sudan in gratitude for the Indian Army’s role in freeing Sudan from Italian occupation.

An Indian National War Memorial Working Committee was quickly constituted, which sent out a questionnaire to the provinces asking for their views on a range of subjects, including the setting up of feeder schools for the proposed academy-cum-war memorial. The questionnaire asked, keeping in mind the “urgent need in India for leaders in all walks of life, including the fighting services”, should “practical steps not be taken to meet the requirement of the immediate future by the establishment of a certain number of residential high schools”.

Today, 65 years later, the military community, especially officers from the NDA, will recognise that these proposals have been implemented in full. The Sudan Block, a magnificent basalt and granite structure, topped with a Jodhpur red sandstone dome, is the central edifice around which the academy stands. Generations of cadets, including this columnist, have dozed restfully through lectures in the Sudan Block’s cool classrooms. Many of those cadets entered the NDA from 19 Sainik Schools across the country, the network of “feeder schools” proposed in 1945.

Lost along the way, fortuitously, is the proposal for the NDA to constitute India’s National War Memorial. A training academy is a living organism that shapes the leaders of tomorrow; bursting with life, it is ill-suited to be a sombre memorial.

Today, with the government unwilling to concede the space for a memorial on New Delhi’s Central Vista, Karnataka MP Rajeev Chandrasekhar, has suggested a Vietnam Wall-style memorial, inscribed with the names of India’s fallen soldiers, on a 50-60 acre site alongside Mahatma Gandhi’s memorial at Rajghat. The design, which Chandrasekhar submitted to the prime minister last week, includes an eternal flame, a 24x7 ceremonial military guard, a memorial wall, a martyrs’ museum, and large, landscaped areas that would allow schoolchildren and other visitors a pleasant day at the memorial. If the army wants the country to know about and to remember its sacrifices, this is the way to do it.
You must log in or register to reply here.
Similar threads
Heavy gunfire ongoing near Saudi’s King’s palace in Riyadh, Saudi Arabia
New Evidence of Ongoing Torture in Sri Lanka
The world's longest ongoing war (Karen resistance)
The battle for Saydia: an ongoing case study in militia based insurgency
Share:
Facebook Twitter Reddit WhatsApp Link