The gun that went places: AK-47

Thread dedicated to pictures of Mikhail Kalashnikov's awesome creation. He recently celebrated his 90th Birthday. The global popularity of the AK-47 is simply amazing:

^Mikhail Kalashnikov (R), the Russian inventor of the globally popular AK-47 assault rifle, raises a toast with Russia's President Dmitry Medvedev during festivities to celebrate his 90th birthday at the Kremlin in Moscow on November 10, 2009.

^AKs with metal-rod butts.
Soldiers from the Centro de Operaciones Especiales (special force unit), also known as the "COE", take part in a military training exercise at a military base near Managua on October 20, 2007.

^Paramilitary policemen take part in an anti-terrorism drill showcasing the Kalashnikov rifle at a military base in Yinchuan, Ningxia Hui Autonomous Region on April 16, 2009.

^A policeman injured in a clash with Gurdwara workers holds his rifle in Chandigarh on January 30, 2009. The clash occurred when police and the local administration attempted to demolish what they said was an illegal construction on the temple grounds. The picture shows a police personnel holding a Kalashnikov rifle.

^Iraqi soldiers chant slogans, brandishing their Kalashnikovs, after a military drill conducted by US forces in Latifiya, about 40 km (25 miles) south of Baghdad on April 6, 2009.

^A member of the Palestinian Security Forces stands guard outside the Fatah conference in the West Bank town of Bethlehem on August 4, 2009. A Kalashnikov rifle is his weapon of choice.

^Members of the Basij Militia's Alzahra Battalion stand in attention during a military parade to mark Basij week at a revolutionary guard's military base in northeastern Tehran on November 25, 2008. Their Kalashnikovs can be seen in this picture.

^A soldier from the Armed Forces of the Democratic Republic of Congo (FARDC) holds his Kalashnikov at a checkpoint north of Kibati village on November 8, 2008.

^A Kalashnikov rifle belonging to the Afghan National Army is placed on the ground by a soldier during a graduation ceremony in Kabul on October 18, 2008.

^A soldier taking cover with his Kalashnikov rifle during a battle between the army backed up by armed civilians and pro-Ceausescu supporters around the government headquarters downtown Bucharest on December 24, 1989. More than 1,000 Romanians were killed across Romania during clashes between demonstrators and Ceausescu's security forces, in what amounted to eastern Europe's most violent anti-communist revolution. The country's communist dictator Nicolae Ceausescu was toppled and shot on Christmas Day, 1989.

SpetsNaz and the AK-47

SpetsNaz and the AK-47 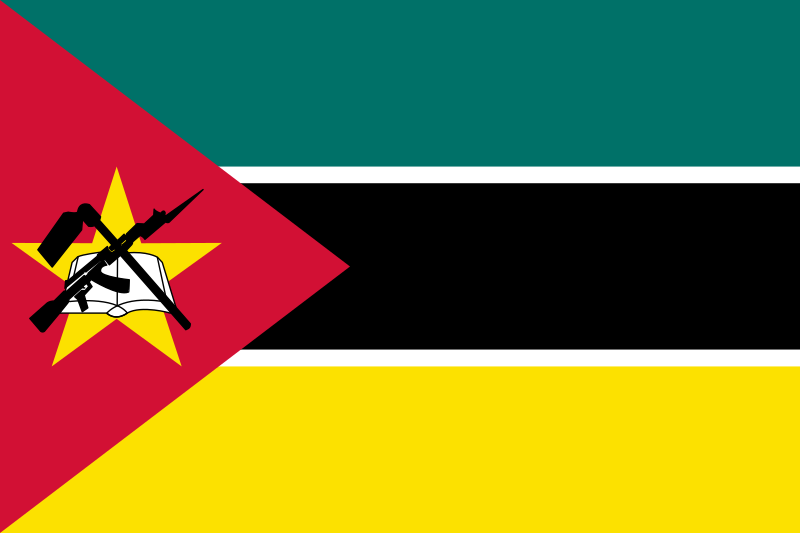 ^The Mozambique flag was officially adopted on May 1, 1983.
Green is symbolic of the fertile land, red the struggle for independence, yellow the country's mineral resources, white signifies peace and black represents the African continent. The official emblem of Mozambique is displayed on the red triangle. It includes the image of an AK-47 and is the only national flag in the world to feature such a modern rifle.

^The first letter of "Allah" reaches up to grasp a stylized assault rifle (closely resembling an AK-47). The logo also incorporates several other objects, namely a globe, a book, a sword, and a seven-leafed branch. 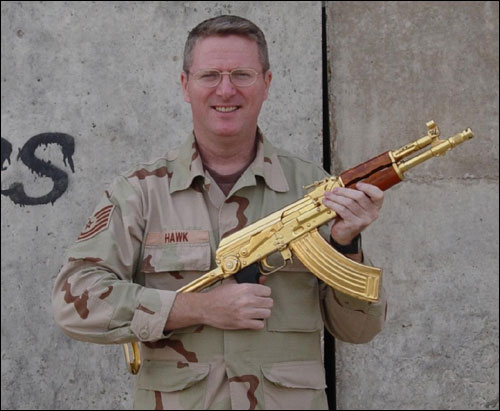 The real weapon of mass destruction 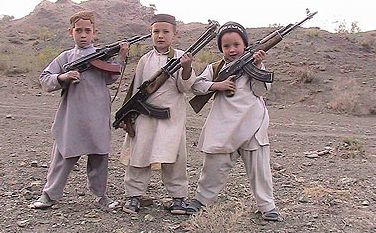 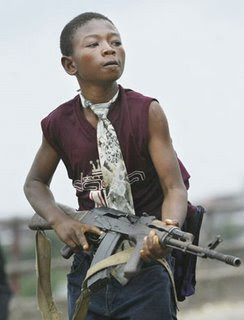 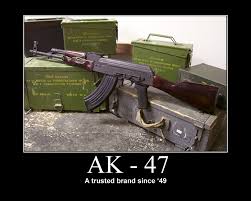 The best flattery for the AK-47 in any film
Click to expand...

Great one JBH22. I had seen this before. You have great taste buddy! Thanks!
Last edited by a moderator: May 10, 2015

^Prague, 1968
Designed by a young Russian tank commander named Mikhail Kalashnikov, the AK-47 assault rifle has attained iconic martial status all over the world. In the photo above, Soviet-led forces, armed with the rifle, crush a reform movement in Czechoslovakia.

^Zagros Mountains, Northern Iraq, 1979
Kalashnikov's design won a state competition in 1947 (thus the name AK-47) and went into mass production two years later. During the deep freeze of the Cold War, the Soviet Union began pouring the guns and its manufacturing know-how into almost 20 spheres of influence, including Iraq. Here, a Kurdish girl in northern Iraq uses the gun to protect her family from an attack by the Iraqi military.

^Wounded Knee, South Dakota, U.S., 1973
Known for their high quality, the guns have functioned perfectly even after being dug out of mud. As word spread, more than 10 other countries began making unauthorized clones, and the guns started to appear all over the world. This man, a member of the American Indian Movement, waves his AK-47 during the siege of Wounded Knee.

^Abadan, Iran, 1980
Over the years, Bulgaria, once a respected supplier of weapons to the Soviet Union, sank into unscrupulous business practices. During the Iran-Iraq war, shown above, during which an estimated half a million people were killed, Bulgaria sold AK-47s to both sides. After the collapse of the Soviet Union, Bulgaria sold the guns to rebels in Congo, Sri Lanka's Tamil Tigers and the Hutu militia, which was responsible for the Rwandan genocide.

^Western Cambodia, 1981
A Khmer Rouge soldier poses with her weapon in the jungle. This radical Marxist movement killed more than 1.5 million Cambodians in the late 1970s.

^Bucharest, Romania, 1989 In an example of acute historical irony, this anticommunist civilian uses an AK-47 to hunt down secret police during the overthrow of Nicolae Ceausescu, Romania's oppressive communist dictator. Read more: http://www.time.com/time/photogallery/0,29307,1964810,00.html#ixzz1KG3iTMXF

^Solentiname Islands, Nicaragua, 1984
A woman and child in socialist Nicaragua train with a local defense militia to fight against the invading contras, the U.S.-backed counterrevolutionaries who sought to remove the left-wing government.

^Kabul, 1992
The U.S. government has been a significant purchaser of AK-47s — or at least guns that look similar to them — for decades. During the 1980s, it supplied Chinese and Egyptian rip-off Kalashnikovs to anti-Soviet insurgents in Afghanistan. In the above photo, a Shi'ite Muslim fighter guards a checkpoint in Kabul.

^Izhevsk, Russia, 2002
Although the manufacturers of the AK-47 are proud that America likes the gun enough to support its piracy, they are outraged at the loss of profit. The flood of knockoffs, some selling at a quarter of the price of the real thing, makes it next to impossible to do business. The gun lines in Izhevsk, shown above, employed some 12,000 people in 1991 but support only 7,000 now. Analysts estimate total world output of these guns at between 70 million and 105 million.

^Basra, Iraq, 2004
The U.S. provided more than 165,000 Kalashnikovs to Iraqi security forces from 2003 to 2006, a significant number of which wound up on the black market. Indeed, Iraq's recent history is clearly reflected in the changing price of the gun on the street. Just after the invasion, as soldiers laid down their weapons, looters raided armories and optimism briefly overtook the country, weapons prices dropped. In the summer of 2003, as multiple customers entered the market, from recently released common criminals to Sunni insurgents to Shi'ite paramilitary units, prices rose again. Here, an armed member of Muqtada al-Sadr's Mahdi Army stands guard over the Central Sunni mosque, where Friday prayers are being performed.

^Bar Kambar Khel, Pakistan, 2008
Pakistani Taliban fighters jump out of a truck in the tribal area near the border of Afghanistan. The leader of the Taliban, Mullah Mohammad Omar, once challenged U.S. President Bush and U.K. Prime Minister Tony Blair to a duel with AK-47s. The U.S. government has again made bulk shipments of faux Kalashnikovs to Afghan forces, this time to combat al-Qaeda and the Taliban.

^Dhushamareb, Somalia, 2009
A Sufi Muslim fighter attends an outdoor religion class. Traditionally nonviolent and tolerant, Sufis in Somalia have only recently picked up guns in response to attacks from al-Shabab, a hard-line Islamist group that has subjected the country's south to a reign of terror. So far, these moderates control an area in the center of the country, enjoy popular support and have fended off incursions.