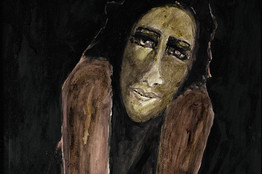 Worth a pretty penny. "Untitled (Portrait of a Woman)" by Tagore

Sotheby's auctioned 12 Rabindranath Tagore paintings for a total of close to 1.6 million pounds (well, 1,599,000 pounds to be precise), well above their estimated presale value of 250,000 pounds. We're not sure what share of the proceeds go to the seller, Dartington Hall Trust, but it looks to us like they'll be getting a good chunk of funding for their arts education programs. An untitled portrait of a woman painted in dark tones sold for 313,250 pounds, while at the cheaper end three works sold for 91,250 pounds. The auction house did not provide details about the buyers but at these prices, we doubt West Bengal Chief Minister Buddhadeb Bhattacharya was involved..


KOLKATA: The ministry of culture, it was learned, had tried its best to buy off the 12 Rabindranath Tagore paintings from the owners, Dartington Hall Trust, before Tuesday's auction conducted by Sotheby's. But its efforts met with little success. The culture secretary Jawhar Sircar had been present in London for days before the auction, and it is believed that he had been trying to buy this "national treasure" to save them from going out of the public domain.

The prod, it was learned, had come from PM Manmohan Singh, with the tacit nod of Congress chief Sonia Gandhi. At the local level, CM Buddhadeb Bhattacharjee and Visva Bharati University were among the many others that had insisted that Centre buy the paintings.

Visva Bharati, in fact, in its desperation to save the paintings from getting auctioned, had also got in touch with the British Museum and urged it to participate in the auction.

Jan Stewart, the keeper of the Asia division of the museum, did participate in the auction, but his bids could not match that of the eventual buyers. Stewart has sent an email to Nilanjan Bandopadhyay, the special officer of Visva Bharati's Rabindra Bhavan — the Tagore museum — to this effect.

"Since we don't have funds to participate in auctions, the British Museum participated at our insistence. We thought if a reputable museum had bought the collection together, it would have remained open for public viewing. However, the price the paintings fetched was beyond the mueum's budget," Bandopadhyay said.

Sircar has returned to India, but is not answering queries. Joint secretary of the culture ministry, Tuktuk Kumar, avoided the question and said, "There could have been other reasons for his visit. There is no official position on this. Also, there are no laws that bind the state on the issue of auction of national heritage in foreign lands."

The fact that Tagore had gifted this set of 12 paintings — mostly watercolour or ink on paper — to his agriculturist British friend Leonard Elmhirst and his wife Dorothy, and that this gift has now gone up for sale has angered many. The duo had set up an archive in their estates, called Dartington Hall, and a trust to look after the exhibits. The most prestigious items in the archive were the Tagore paintings, several of his manuscripts and letters. It is the trust that decided to auction these paintings to collect funds for its expansion and upkeep.

"How can you sell off your core exhibits to raise funds? The trust didn't show respect to Tagore on his 150th anniversary. To add insult to injury, it has said that it would organize a special programme to mark the anniversary later this year," said Visva Bharati vice-chancellor Rajat Ray.

Scholars said that the trust, perhaps, did not choose to sell the letters and manuscripts, as they do not fetch so much money. Though painter Jogen Chowdhury is extremely pained at the fact that such a great collection will now never be seen together by the public, he is happy that veneration for Tagore as a painter is growing in the international art market.

"That is amply clear from the whopping sums that the paintings have fetched. In the past, Tagore's paintings have fetched not more than Rs 25 lakh to Rs 30 lakh. He is considered to be the first modern painter of our country. For the first time, someone deviated from the traditional narrative style in painting and created work that highlighted the basic elements of the creation. He was our first impressionist and expressionist. There is a strange surrealism and sensitivity in Tagore's paintings that move me like no other," Chowdhury said.