Six people have been killed and at least 50 others wounded in a suicide attack in Khybar Agency of Pakistan. 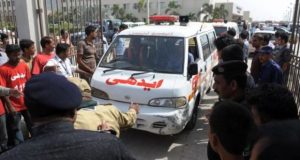 A top official told reporters that the suicide bomber was trying to enter a local government office in Jamrud area.

Shahab ali Shah said due to tight security the bomber could not enter so he blew himself up at the entrance of the office this morning.

The victims have been transferred to Peshawar’s Hayatabad Medical Complex where doctors have raised concern over the health condition of some of those wounded.

Khyber Agency is one Pakistan’s seven semi-autonomous regions where Taliban, al-Qaeda and other militant groups are reportedly operating.

No group has immediately claimed responsibility for the attack.