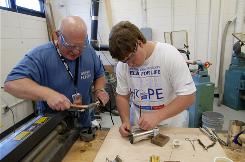 Part of the story is solid. Part of it remains a mystery.

What is certain is that on the night of Feb. 17, 1864, the Confederate submarine H.L. Hunley sank the USS Housatonic in Charleston Harbor in South Carolina to become the first submarine to sink a ship during combat.

Then the Hunley itself literally sank into oblivion when it went down with its crew of eight. The resting place of the Civil War submarine, which had remained a mystery for more than century, finally was discovered in 1995 off Sullivan's Island.

But before the submarine sank, the story goes, it flashed a blue light to Confederate soldiers on the shore to signal success.

But as this part of the story comes from second- and third-hand accounts, it "gets a little fuzzy," says archaeologist Mike Scafuri of the Warren Lasch Conservation Center in Charleston, where the recovered Hunley is on display.

Nobody knows whether the signal was supposed to be made directly after the attack or as the Hunley approached shore, Scafuri says. And another question remains: Could a lantern have produced a strong enough light for the soldiers to see?

To try to answer the question of the mysterious blue signal, 12 students at Hamburg (Pa.) Area High School are building three replicas of the submarine's lantern in the school's metal shop.

Retired history teacher Ned Eisenhuth and retired shop teacher Fred Lutkis began the project after expressing interest last summer in the history of the Hunley to the Lasch Conservation Center.

Before they retired, Eisenhuth and Lutkis had worked with students at Minersville (Pa.) Area High School to create replicas of a Viking burial sled and a medieval cart.

These will be the only true replicas of the Hunley's lantern, Eisenhuth says. Next month, the school plans to donate the best replica of the lantern to the conservation center, which has been studying the submarine since it was excavated in 2000 with help from the Friends of the Hunley Organization.

Scafuri says the conservation center and the high school hope to answer the following questions with replicas of the only light source on the Hunley:

"¢Could the soldiers on shore have seen the blue light from more than 1,000 feet away?

"¢Just how powerful was the lantern?

"¢Could the lantern actually produce a blue-colored light?

Using X-rays and drawings from the conservation center of the actual lantern remnants from the recovered submarine, students have begun soldering and molding sheet metal to form the lantern.

The lantern consists of three cylinders that fit tightly inside one another: the outside, inside and lens cylinders, says Lutkus.

"The hardest part has been going off the diagrams (of the lantern) that were mailed to us" by the conservation center, says Hamburg senior Cody Wertz, one of six students working on lantern construction. "There's some stuff that you don't know exactly, that we have to guess to the best of our ability what they would have had."

Hamburg offers only woodshop, so Lutkus says he had to teach the students how to work with sheet metal, which proved difficult.

"Sheet metal does not always do what you want it to do," Lutkus says. "You're taking a flat surface and making it three-dimensional. It's not like wood where, if you mess up, you can fix it or hide things. When you mess up with sheet metal, you have to scrap it and start over."

Freshman Seth Kunkel says metalworking also can be dangerous: The soldering iron gets hot. He says he is picking up many of the techniques, such as using a roll iron to make cylinders and using a blowhorn stake to hammer metal into different shapes.

Students also faced problems making the lamp historically accurate, Eisenhuth says. Restrictions on commercial whaling have made whale oil, which was burned in the original lamp, hard to come by.

After consulting a lantern manufacturer, Eisenhuth says, he learned that kerosene — also available during the Civil War — would be a historically accurate alternative.

The lanterns will be finished this month, and Eisenhuth says he hopes to donate two, rather than just the promised one, to the center and to put the third unused lantern on display at the high school.

Inside a time capsule

http://www.usatoday.com/news/education/2010-05-11-hunleylantern11_ST_N.htm
You must log in or register to reply here.
Similar threads
Pakistan has left its own students to die in Ukraine.
Chinese students better at spotting fake news – Pisa
Ashdoc's movie review---Student of the year part 2
China: Pakistani student Osama killed in public by the family of his GF
Share:
Facebook Twitter Reddit WhatsApp Link