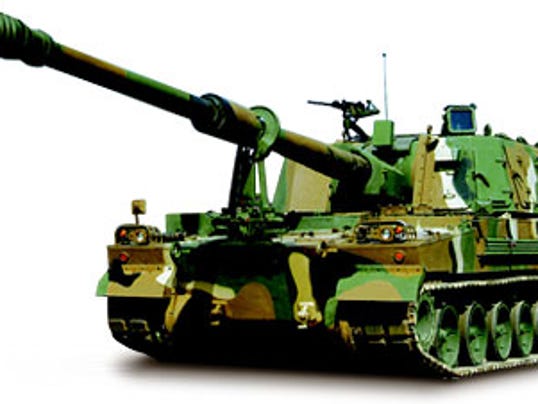 Samsung Techwin will sign a contract on Wednesday here with Poland's state-funded defense manufacturer HSW. The contract is valued at roughly US $320 million, according to the officials.

It is the second export of the K-9 Thunder self-propelled 155mm howitzer after a deal with Turkey in 2001. Under the $1 billion license agreement, the first eight K-9s were produced in South Korea, while the remaining batch of more than 300 units was built in Turkey. The Turkish variant is called the T-155 Firtina.

Samsung Techwin will sign the same type of license agreement with Poland, according to a DAPA spokesman.

"Samsung Techwin will produce the first 24 units here before 2018, and after that, HSW is to build the remaining 96 units," the spokesman said.

Fitted with an automatic fire-control system, the artillery has a maximum rate of fire of 6 rounds per minute and is capable of multiple-round simultaneous-impact firing. It has a firing range of 40 kilometers.

The latest K-9 deal comes after a merger and acquisition agreement over Samsung Techwin.

South Korea To Export K-9 Howitzers to Poland
A

K9 was tested in India and is a participant in the SPG contest. It's tied with local partner L&T.

Why buying korean howitzers if with the german Pzh 2000 (that are literally gifting to the croats) using Vulcano ammo you can reach with no problem the 80km range.

Poland will buy only full ToT for chasiss and MTU engines

Second - this article is full of mistakes.

Poland have it's own turret system - from AS90 Braveheart (Polish name "Krab" (Crab)).
There was chassis made in Poland - SUM Kalina then on based this - chassis for KRAB 155mm howitzer.
During problems whit non existig power-to weight ratio in W46 and S1000 engine in almout 60t. howitzer polish MoD after year of testing had deicded to buy full TOT for chassis and chassis only.
Samsung offer the best conditions.
You must log in or register to reply here.
Similar threads
South Korea Exports Submarines to Indonesia .
South Korea's HHI Launched the Final KSS-2 Type 214 Submarine for ROK Navy
SOUTH KOREA : ‘The U.S. Is No Longer a More “Developed” Country Than Us’
Republic Of Korea (South Korea) Navy
Share:
Facebook Twitter Reddit WhatsApp Link