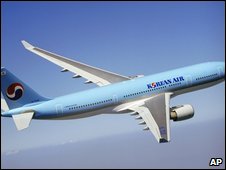 Two airlines in South Korea are to re-route flights after North Korea saying it could no longer guarantee their safety.

Pyongyang's threat follows its warnings that a US-South Korean military exercise, due to take place next week, could trigger a military clash.

North Korea has long described such exercises as provocative but tensions between the two Koreas are now high.

About 30 international flights a day usually pass through North Korean airspace to and from the South.

South Korea has called on the communist state to immediately withdraw its threat.

"Threatening civilian airliners' normal operations under international aviation regulations is not only against the international rules but is an act against humanity," Unification Ministry spokesman Kim Ho-nyeon said.

The BBC's John Sudworth in Seoul says passenger planes normally leave Seoul for the eastern United States by swinging north over the Sea of Japan to follow the Korean coastline towards Russia and North Alaska.

The two major airlines, Korean Air and Asiana Airlines, have both re-routed their flights.

The annual US-South Korean drill, which involves tens of thousands of troops, starts on Monday and continues for 12 days.

North Korea objects to the exercise every year, but this event comes amid high tensions on the Korean peninsula.

Pyongyang has scrapped a series of peace agreements with the South over Seoul's decision to link bilateral aid to progress on denuclearisation.

Six-nation talks on the aid-for-disarmament deal have stalled and North Korea's neighbours believe it could be preparing to test-fire a long-range missile under the guise of a satellite launch.

Earlier this week, North Korea raised objections to the annual exercise at a rare meeting between its generals and the US-led United Nations Command (UNC) in the South.

Then on Thursday a North Korean committee warned that "security cannot be guaranteed for South Korean civil airplanes" during the forthcoming drill.

No-one knew what "military conflicts will be touched off by the reckless war exercises", it said.

A second short meeting between generals and the UNC was held on Friday, but there were no immediate reports of progress.

He said Pyongyang should be working on ways to fulfil its disarmament commitments "rather than making statements that are threatening to peaceful aviation".


SEOUL (AFP) – North Korea has ordered its military to be combat ready, state media said early Monday, ahead of joint US-South Korean manoeuvres that Pyongyang has characterised as a prelude to war.

In a statement carried by the Korean Central News Agency, the Korean People's Army (KPA) described the exercises starting Monday as "unprecedented in the number of the aggressor forces involved and in their duration."

"The KPA Supreme Command issued an order to all service persons to be fully combat ready," the statement said. "This is a just measure for self-defence for protecting the sovereignty and dignity of the nation."

"A war will break out if the US imperialists and the warmongers of the South Korean puppet military hurl the huge troops and sophisticated strike means to mount an attack," it said.

The North added in a separate statement that it would cut off North-South military communications during the exercises, saying that maintaining normal channels would be "nonsensical."

The communist North has repeatedly accused Seoul and Washington of using the annual exercises, which this year will last until March 20, as a pretext to launch an attack on it -- a claim denied by the United States and the South.

The joint exercise will involve a US aircraft carrier, 26,000 US troops and more than 30,000 South Korean soldiers.

The exercises come at a time of high tensions with the South and growing pressure for the North to end its nuclear weapons programme and drop plans to test its longest-range missile.

North Korea has said it is preparing to fire a rocket for it says will be a satellite launch, although Seoul and Washington say the real purpose is to test a missile that could theoretically reach Alaska.

In a separate statement, the General Staff of the Korean People's Army said it would retaliate "with prompt counter strikes by the most powerful military means" if there was an attempt to intercept its satellite.

The North has previously warned that the "slightest" conflict during the exercises could rapidly escalate and fears of a border clash have grown since Pyongyang on January 30 scrapped peace accords with Seoul and warned of war.

The United States has responded to the communist state's comments by urging Pyongyang to tone down its rhetoric.

North Korean generals last week met with the US-led United Nations Command on easing tensions ahead of the joint exercises, in the first such talks in almost seven years, but reportedly used the opportunity to criticise the latest exercises.

The North is angry at South Korea's conservative leader Lee Myung-Bak, who scrapped his predecessors' policy of offering virtually unconditional aid to Pyongyang.

The two Koreas are still technically at war because the 1950-1953 Korean conflict ended only in an armistice.

A US-led UN force fought for the South in the Korean war and the United States still stations 28,500 soldiers there to back up Seoul's 680,000 troops against the North's 1.1 million-strong armed forces.

The exercises come as the new US envoy on North Korea, Stephen Bosworth, said Friday a threat by Pyongyang against South Korean commercial airliners near its airspace was "a provocation."

The communist regime late Thursday announced it could not guarantee security for Seoul's flights near its territory because the US-South Korean military exercises could trigger a war.

"This is, we believe, very undesirable," Bosworth told reporters after meeting Japan's Foreign Minister Hirofumi Nakasone in Tokyo. "It's a provocation and it's unacceptable."

Bosworth is currently on a tour of China, Japan and South Korea, in an effort to dissuade the North from a launch and to try to persuade it to resume stalled nuclear disarmament talks.