Salute and thanks to the Armed Forces on Vijay Divas

The nation is grateful to the Armed Forces for defending the nation in the face of aggression from the enemy. For winning the war in spite of having it's hands tied and the enemy sitting on hights with a great advantage. For not bothering about the barrage of bullets and shells and moving forward to capture each and every bunker. For getting hit and falling but still say "yeh dil maange more".

With tears in our eyes and pride in our hearts, we salute and thank our brave soldiers today on Vijay Divas.

It was in 1999. India is following 2 things very closely. The 1999 Cricket World Cup and the Kargil War. But for every Indian Kargil War is another aggression on their mother Land. But like every other war Indian Armed Forces made the supreme sacrifice in defense of the unity and integrity of India.
Today after 10 years and on the auspicious occasion of Vijay Divas, I salute our Armed Forces and Brave soldiers. They are the real heroes. May GOD bless their family members.
Jai Hind.

I salute the brave sons and daughters of our armed forces who stands to guard the vast borders of our nation without thinking for a moment about their life , and maintaining integrity and unity of our country making supreme sacrifice in that process those who fought till their last blood to drove back enemy intruders from our motherland 10 years ago , I salute the brave souls.

The voice of an immortal solider

my dedicatation on Vijay divas

to my dear Armed Forces
by a humbel NRI
V

Salute to the brave hearts.
X

JAI HIND.......when kargil happenned i was only a kid,but when i think of those of days it feels amazing of how a great sense of patriotism evolved in me even then,because of kargil........somehow even at that age,i felt for the great sons of india who were saving the pride of their motherland with many even being martyred........not only me,that war i think bought a common feeling of care for motherland in all the youth of india at that time.......who had never seen such love and sacrifice for their motherland before..........I SALUTE OUR HEROES OF KARGIL FOR MAKING US PROUD,FOR MAKING ME COME TO KNOW WHAT IT FEELS TO BE AN PROUD INDIAN.......jai hind

Salute to those heroes ....

Kargil War is the first Indian War that was played live on TV.

It's been 10 years since the Kargil War, the first war in the subcontinent that was played out on live TV. The war inspired many young people -- both men and women -- to join the Army.

"When we saw and heard the stories of the war, I felt proud and motivated to join the Army. Now, I could not have asked for a better beginning to my career being here in the place that inspired me in the first place," said Lt Girija, Adjutant, Engineers Regiment.

Kargil war inspired Girija and Shraddha to join the Army. As schoolgirls during the war, they did not realise the importance of the event but still felt inspired to enroll in the Army.

"Even at that age, I, like many others, thought I should contribute something, the spirit was such at that time," said Lt Shraddha, Adjutant, Signals Regiment.

Coincidentally both Girija and Shraddha are currently posted in two neighbouring units in the Kargil, Drass sector and both have identical jobs in their respective battalion as adjutants they are the lynchpin of their unit, acting as an important link between the commanding officer and the soldiers.

Girija and Shraddha are of course not alone, several men, who were boys back then -- Lt Gagandeep, Lt Saurabhand, Lt Chakraveer coincidentally posted in Kargil have identical stories.

The Kargil war inspired scores of young men and women to take up Army career. These officers will become leaders of men in coming years and serve the Army well. 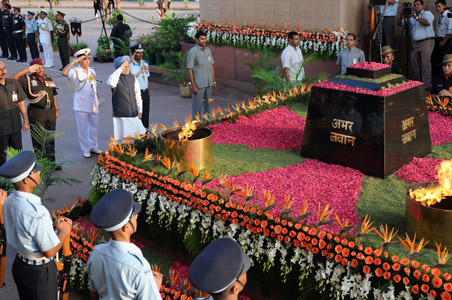 Salute to the Brave Indian warriors

salute to them God blesss our armed forces
You must log in or register to reply here.
Similar threads
Salute to KHAD and Dr Najebullah
This salute to Tricolour by Assam school is simply the best! Here's why
BSF India's First Line of Defence - Saluting Our Soldiers
A Salute to India Army
Share:
Facebook Twitter Reddit WhatsApp Link