'Strict security measures will be enforced at all the centres
for safety of the players.' -Photo by APP


ISLAMABAD: The national training camps for the 11th South Asian Games will start from Sunday at different locations across the country.

The ‘final phase’ of the training camps for the national federations is being organised by the Pakistan Sports Board with an aim to prepare a strong squad for the forthcoming Games.

A spokesman for the PSB said that the board had given its approval for the camps.

'The national training camps are slated to be held at Islamabad, Karachi, Lahore and POF Wah Cantt centres simultaneously from Nov 1,' he said.

He added: 'The camps for athletics, swimming, badminton, basketball, cycling, handball, karate, squash, taekwondo, weightlifting, wrestling, wushu and judo will be set up in Islamabad.

'Karachi will be the venue for the boxing and table tennis camps while Lahore will host cycling, kabaddi and karate with POF Wah Cantt holding the volleyball camp.'

The spokesman added, 'Strict security measures will be enforced at all the centres for safety of the players.'

For those who don't know:

Bhutanese athletes are training to represent the country in the 11th South Asian Federation (SAF) games in Dhaka in Bangladesh early next year.

According to Dorji Tenzin, Officiating Secterary General of the Bhutan Olympic Committee (BOC), the Bhutanese athletes are trying their best to improve their performance.

“We feel that we can win some medals. We have seen drastic improvements in the quality of the athlete’s performance and the interest of both the athletes and coaches,” he said.

He added that the BOC has informed the federations to take initiatives and conduct transparent selection of athletes based on their performances.

A total of eight countries will take part in the games. The other participating countries are Afghanistan, Bangladesh, India, Maldives, Sri Lanka, Pakistan and Nepal.There will be 23 official sports for the 11th SAF Games.

Bhutan will compete in archery, football, taekwondo, athletics and boxing.


Regardless of what happens at next month's World Cup Qualifiers (WCQs), Afghanistan will play against at least of two of Asia's Test nations in 2010, when cricket makes its debut the South Asian Games next year in Dhaka, Bangladesh.

The matches, to be played according to the Twenty20 format, will be contested by under-21 teams from Afghanistan, Nepal, Bhutan, Maldives, India, Pakistan, Bangladesh and Sri Lanka.

Asian Cricket Council chief executive, Syed Ashraful Huq, said the Twenty20 format would surely help "the developing countries put up a good show". "Twenty20 is a great leveller and should Afghanistan, Bhutan and Maldives and Nepal come up against the ODI countries, the matches should be quite competitive," Huq said.

Cricket will also debut at the Asian Games in Guangzhou, China from November 11-27, 2010 and will be played in the Twenty20 format as well. Asia's non-Test countries will contest the qualifying event for that tournament, the ACC Twenty20 Cup 2009, in the United Arab Emirates from November 4-13, 2009.

The swimmers were selected based on their performance in a competition held at the Dashrath Stadium on October 15.

According to the association, the swimmers whose timings were closest to the timing of bronze medalists during the 10th SAG were selected for the 11th SAG.


The 1st meeting of the South Asian Games Organising Committee (SAGOC) was held Thursday reviewing the progress of the 11th South Asian (SA) Games beginning here on January 29 next year.

Addressing a press conference at the NSC Tower after the SAGOC meeting, BOA secretary general Kutubuddin Ahmed said they are expecting a total of 80 medals, including 17 gold, in the ensuing regional Games.

As per assurance of federations, they are hopeful of getting 80 medals, including 17 gold.

The meeting discussed the progress and preparation for the ensuing Games, budget, venues construction, renovations and training activities.

A record 23 disciplines of sports have been included in the eighth-nation mega meet. Dhaka is going to host the South Asian Games for the 3rd time after 1985 and 1993.

The meeting also approved 20 subcommittees of the Games.

The BOA secretary general said they have received Tk 10 crore out Tk 16 crore budget sanctioned by the government for the training of sportsmen.

The training already started on January 2 this year and it would continue till the start of the games.

The games will be held in the following probable venues in the city:

Besides, some matches of the games will be held in five divisional venues -- Chittagong, Rajshahi, Barisal, Khulna and Sylhet.

The meeting also decided to award the country's successful sportsmen of the Games.

Co-president Ahad Ali Sarkar, who was present at the press conference, said they would be able to finish the construction and renovation works of different venues before the start of the Games.

In the 6th South Asian Games in Dhaka, Bangladesh secured 62 medals including 11 gold. 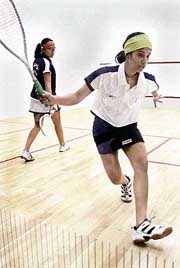 
Dehra Dun, Sep 18 (PTI) Uttarakhand Chief Minister Ramesh Pokhariyal Nishank today asked the officials to complete the preparations related to South Asian Federation (SAF) winter games, to be held early next year here, by the end of next month. During a review meeting with officials, Nishank, who is heading the organising committee of the games, said since many international players are expected to participate in the games, all preparations should be completed by October 31 without compromising on the quality.

Directing the sports secretary Utpal Kumar Singh to appoint nodal officers for the games, the Chief Minister also sought a report on the preparations within a week''s time. He also santioned Rs 13 crore for the preparations of the games.

SAF winter games are scheduled to be held in January next year in Dehra Dun and Auli in which all the countries of South Asia region are expected to participate.

Eight boys and eight girls will attend the national badminton camp for the South
Asian Games, which will be held at the Pakistan Sports Complex in Islamabad after Eid. —APP/File photo

‘By no means, is it easy to end the virtual Indian monopoly in badminton at the South Asian Games but we aim to bag at least two golds in these Games,’ Razi told APP on Monday.

The 11th South Asian Games are scheduled to be held in Bangladesh early next year.

‘Pakistan has never beaten India in these Games but we are hoping to change that this time around,’ said the coach.

Razi believes that national shuttlers Wajid Ali Chaudhary, Ahsan Qamar and Zeeshan Umer among the boys and Sara Khan, Palwisha Bashir and Ayesha Akram among the girls are quality players and are capable of achieving this feat.

Eight boys and eight girls will attend the national badminton camp for the South Asian Games, which will be held at the Pakistan Sports Complex in Islamabad after Eid.

‘The Pakistan Badminton Federation is exploring the possibility of a foreign tour for the selected squad, probably to Iran or Jordan, before they turn up at Dhaka for the Games,’ he added.

The training camp will be held from the last week of September until the departure of the team for Bangladesh.