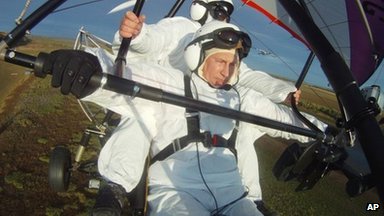 Most recently, Mr Putin flew in a motorised hang glider alongside a Siberian white crane

Russian President Vladimir Putin has admitted that some of his most dramatic wildlife stunts were staged.

Russian TV has shown videos of him tagging whales, saving a TV crew from a tiger and, most recently, taking to the skies to fly with Siberian cranes.

But, in an interview with an editor who lost her job after refusing to send a reporter on one of his trips, Mr Putin conceded some stunts were excessive.

He said the faked wildlife encounters highlighted animals under threat.
Click to expand...