Russia's next-generation manned space vehicle might be equipped with thrusters to perform a precision landing on its return to Earth.
Engineers are considering a rocket-powered landing system for the successor to Russia's Soyuz spacecraft.
If accepted, it would be the first time that a manned vehicle relied solely on rocket engines for touchdown.
Previous manned missions have landed on Earth using a parachute or, in the case of space shuttles, a pair of wings.
RKK Energia, Russia's prime developer of manned spacecraft, had to examine the feasibility of the rocket-powered landing as a result of conflicting requirements for the project set by the Russian government.
Currently, Russian cosmonauts are carried into orbit on the three-seat Soyuz capsule. Russia is developing the new craft as a replacement to this venerable spacecraft, which has been in service for more than four decades.
The Soyuz does use small solid propellant motors to soften its touchdown, but the ship's parachute plays the main role in providing the vehicle and crew with a safe landing. 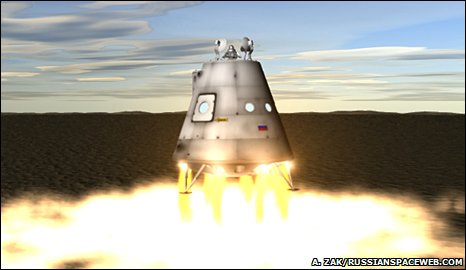 New launch site
In 2007, Moscow took the momentous decision to build a new launch site in the nation's far east, hoping to end Russia's dependency on the spaceport in Baikonur, which, after the collapse of the Soviet Union, ended up in the newly independent republic of Kazakhstan.
The new site, which has been dubbed Vostochny, or simply "Eastern", will be located almost as far south as Baikonur - an important orbital mechanics factor which determines the cargo-carrying capacity of rockets.

I think, from the technical point of view, there is no doubt that this concept would work
Christian Bank, EADS-Astrium
However, the very same decision left only a narrow strip of land in the European part of Russia, near the city of Orenburg, where returning space capsules could touch down if they followed a straight ballistic trajectory.
Not surprisingly, Russian engineers found themselves under political pressure to improve the manoeuvrability of the future spacecraft, so it could guide itself into a relatively small landing area.
The alternative - landing under a parachute - would put the craft at the mercy of the wind.
Radical solutions like gliding wingless vehicles and "transformers" with deployable wings were deemed too expensive and technically risky giving the Kremlin's current requirement to have the new spacecraft ready for its first manned mission in 2018.
Eventually, the idea for a rocket-assisted landing emerged as a winner, promising to keep the predicted touchdown to a patch of land of only two by five kilometres.Last July, Korolev-based RKK Energia released the first drawings of a multi-purpose transport ship, known as the Advanced Crew Transportation System (ACTS), which, at the time, Russia had hoped to develop in co-operation with Europe.
But the design of the spacecraft's crew capsule had raised eyebrows in some quarters, as it lacked a parachute - instead sporting a cluster of 12 soft-landing rockets, burning solid propellant.
Combined with retractable landing legs and a re-usable thermal protection system, landing rockets promised to enable not only a safe return to Earth, but also the possibility of performing multiple space missions with the same crew capsule.
According to the presentation made by Nikolai Bryukhanov, the leading designer at RKK Energia, at the 26th International Symposium on Space Technology and Science in Hamamatsu, Japan, the spacecraft would fire its engines at an altitude of just 600-800m, as the capsule is streaking toward Earth after re-entering the atmosphere at the end of its mission.
After a vertical descent, the precision landing would be initiated at the altitude of 30m above the surface.
Christian Bank, the leading designer of manned space systems at EADS-Astrium in Bremen, Germany, which at the time was responsible for the European side of the ACTS project, agreed with the validity of this novel Russian approach toward landing.
"It was explained to us how it was supposed to work and, I think, from the technical point of view, there is no doubt that this concept would work," Mr Bank told BBC News.
However, inside Russia, the idea apparently has many detractors. Since the end of 2008, Moscow has shrouded the new manned spacecraft project - now known by the Russian abbreviation PPTS, for Prospective Piloted Transport System - in a veil of secrecy.
But hints dropped by Russian officials and in anonymous postings on industry web forums have provided insights into a vigorous debate on the landing system raging within the Russian space industry.

Controversial system
In April 2009, the semi-official RIA Novosti news agency quoted an unnamed RKK Energia official as saying that the future spacecraft would use an environmentally-friendly liquid propellant - such as alcohol - during its touchdown.
The use of liquid propellants would also enable more control during landing thanks to variable thrust, while solid fuel would burn according to a pre-determined profile once it had been ignited.

The Zarya project fell through just before the collapse of the Soviet Union
Still, the switch to a liquid propellant did not silence the critics, who regard any rocket engines too complex and risky to rely on in the last minutes or seconds before touching down.
As a result, an alternative concept has emerged, which would combine a high-precision rocket-powered landing under normal circumstances and a parachute in the case of an emergency.
As with any compromise, it requires splitting the capsule into two parts - the crew cabin and the propulsion section.
If the craft's landing engines were to fail, the propulsion section would have to be jettisoned. Otherwise, the propellant-laden ship would be too heavy for a parachute to handle.
As preliminary development of the PPTS vehicle would not be completed until mid-2010, only time will tell whether this compromise can silence the system's detractors.
Track record
RKK Energia did not begin its work for the rocket-powered landing system on a blank sheet of paper. In the 1980s, the company worked on a highly classified project to develop a large manned capsule, called Zarya ("Dawn"), for a wide range of civilian and military missions.
The bell-shaped vehicle was to use liquid propellant rockets for returning to Earth. Zarya was in an advanced stage of design when the project was shelved in 1989 on the eve of the Soviet Union's collapse.

The US had a similar idea for its DC-X experimental vehicle
Back then, the concept of a rocket-powered landing also produced plenty of controversy.
During the formal defence of the project, one high-ranking official sceptical of the rocket-cushioned approach to landing reportedly used an unprintable expletive to describe what was going to happen to crew members unlucky enough to encounter a rocket engine failure a few seconds before touchdown.
But if a rocket-powered landing was ever to be adopted for Russia's next-generation manned spacecraft, it would not be the first space vehicle to use such a system.
In the 1990s, the US tested an unmanned prototype of a re-usable launcher, know as DC-X, which would lift off and land vertically under rocket power.
Conceived primarily for the needs of the US Star Wars missile defence programme, DC-X was abandoned after the end of the Cold War.
You must log in or register to reply here.
Similar threads
China mulls to buy Russia's Su-57 stealth fighter jet
Beyond Pak-fa and Mig-35: Russia mulls development of Four New Fighter jets,Should India have alook?
Russia, NATO mull delivery of 27 Mi-17s to Afghanistan
Russia and U.S. mull joint production of An-124 transport planes
Share:
Facebook Twitter Reddit WhatsApp Link