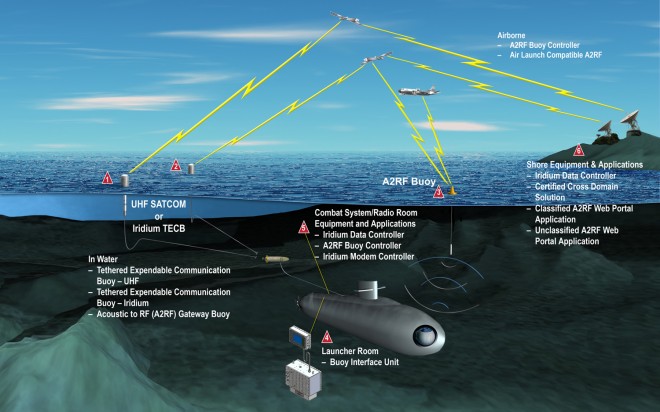 A nuclear submarine in deep dive may be the last place on Earth where it's impossible to get a phone call, a text message or the day's dose of spam. But all that may soon be over, if a Lockheed-led program works out as planned.

The subs glide quietly along the depths of the ocean for weeks at a time, isolated from communication with surface dwellers save arcane one-way messages delivered at very low bit rates by Extremely Low Frequency (3-3000 Hz) or Very Low Frequency transmissions (3000-30,000 Hz). In order for subs to respond, or if communication beyond slow alphanumerics is required, they must come up for air or stick an antenna above the water.

"Most people think our submarines "¦ can make phone calls whenever they want at a moment's notice "¦ but our subs do not have that luxury," says Rod Reints, the man in charge of a Lockheed Martin-led program to bring submarine communications into the 21st century.

At the center of Communications at Speed and Depth program is new technology that could enable stealth submarines to be as connected to the Defense Department's Global Information Grid as any Navy ship. Within a few years, all U.S. Navy subs will be equipped with expendable high-tech communications buoys that will allow two-way real-time chat, data transfer and e-mail. 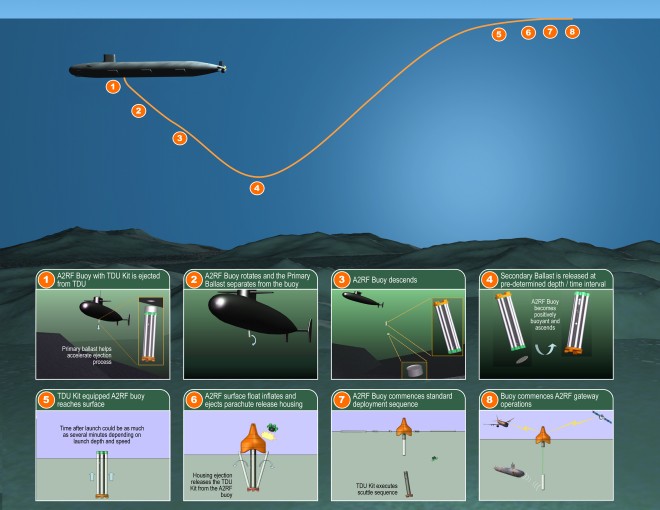 It seems so much simpler than other attempts at connection with underwater vessels.

Until a few years ago, mind-bogglingly large (as in 52 miles long) ELF and VLF antennas were the state-of-the-art in stealth submarine communication. At such low frequencies, the earth itself must be recruited to generate the signals, which is why subs can only receive, and not send them. The resulting antennas are tens of miles long and generate complaints from neighbors paranoid about possible electromagnetic health effects. There are only a handful of ELF transmitters in the entire world, two in the United States: one in Michigan and one in Wisconsin.

Then, there's the High Frequency Active Auroral Research Program, which tested out ways to use the upper atmosphere as an antenna replacement. The Alaskan array can excite the earth's ionosphere with high-frequency radio waves, inducing it to emit the extremely low-frequency bands needed to covertly penetrate saltwater.

Recent underwater-comm research has transitioned to higher frequency bands in more compact packages (compared to tens of miles, that's not difficult). Qinetiq's Seadeep will enable two-way communication with U.S. subs using airborne blue-green lasers. Raytheon's Deep Siren is a program of expendable pager buoys that can relay messages from satellites to submarines acoustically, but it can only transmit one way.

Comms at Speed and Depth will be the first two-way underwater communication system for submarines. The exact depth at which subs will be able to deploy the buoys is classified, but Reints asserts that the length of the buoy cables is "measured in miles, and it's long enough to allow the submarine to launch at significant depth and continue at normal operational speeds during a mission." 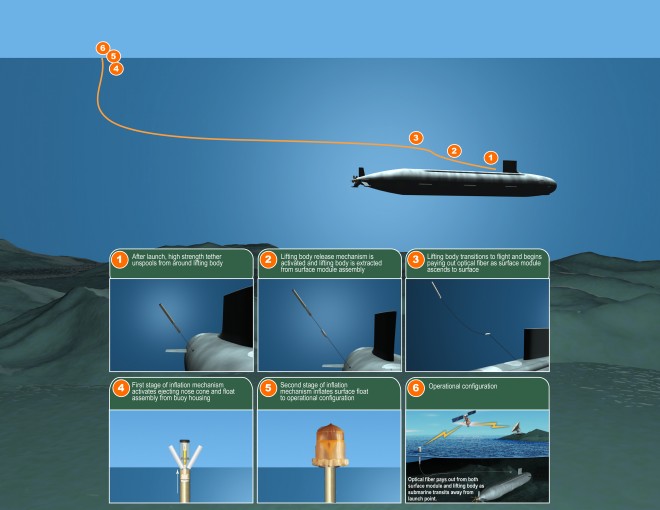 Three buoys are in development by Lockheed Martin and two subcontractors, Ultra Electronics Ocean Systems and Erapsco. Two of them are tethered to the sub and communicate with it using fiber optic cable. One is equipped for communication with the Iridium satellite constellation, the other for UHF. The third is a freewheeling acoustic-to-RF buoy. It can be dropped out of an aircraft or even launched out of a sub's trash shoot.

The buoy batteries for the tethered systems last for up to 30 minutes. Once it loses power, the buoy scuttles itself. The untethered buoys are designed to be deployed for three days.

Phone calls are technically possible with the new system. Reints says that although his team made an Iridium test call last April, "voice is not the intended purpose right now."

The first buoys are supposed to be delivered to the Navy for operational testing by January 2011.

All of this underwater communicativeness might just take the thrill out of boomer movies. What kind of drama will stoke the next Crimson Tide if the captain and XO get crystal clear instructions from D.C. that they can verify real-time?