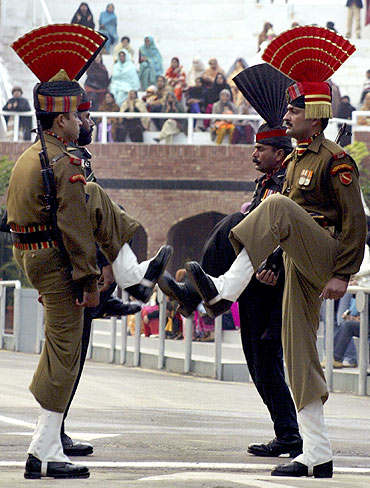 It is the sad fate of any and every security analyst to be bugged with the 'Pakistan' bogey. Even Indians travelling abroad are often quizzed by foreigners on this 'enfant terrible' of a nation. My reaction is generally to just smile and get on with other issues. But we as Indians must understand why this happens.

Take a sample of any newspaper/television news channel and we find that 'international' coverage is dominated by Pakistan. Our politicians, both the ruling combine and opposition, are no exception.

We even have a junior minister of external affairs (yes the one who tweets first and thinks later and had hijacked Indian prestige in an unsuccessful attempt to become UN Secretary General some years ago) talking out of turn on this issue.

For an Indian politician, there is no better way to stay in limelight than to speak on, what else, Pakistan! Recently even a film star adroitly exploited this national obsession to get free publicity for his film.

Indian diplomats have years tried to get our international relations de-hyphenated from Pakistan, unsuccessfully. Here is an attempt to take the first baby step towards this goal of rational thinking and behaviour by Indians.

Yes, I refer to the 'tamasha' that is carried out at the Wagah border under the guise of flag-lowering ceremony. Those of us with armed forces background are aghast at the goose stepping, aggressive staring match that our BSF jawans indulge in with Pakistani Rangers. Flag lowering is a solemn ceremony and tradition goes back to the days when fighting used to end at sunset. But what happens at Wagah is caricature of this ceremony and does not sit well on a mature and confident nation.

The need and necessity for Pakistan to do all this is self evident. That country is founded on hate. But by participating in this mindless display of 'jingoism' (not confident nationalism), we Indians descend to the level of Pakistan.

Wagah is not the only border point where the tricolour flies. We have a similar post at Nathu La on the Indo-Tibet border, with Burma at Moreh and I am sure with Bangladesh as well as Nepal and Bhutan. To the best of my knowledge, this kind of tamasha does not take place at those places. Some years ago, the Chinese used to broadcast anti-India abuse in Hindi at Nathu La. But we never retaliated. Eventually the Chinese stopped their mischief.

India [ Images ] is a billion-strong country with a thriving economy is not in competition with Pakistan. We are certainly not at par in any respect. Then why do we give this opportunity to our recalcitrant neighbour to insult us? It is time the home minister instructed the BSF to move the flag post about 100 yards inside where we can carry out our own dignified ceremony. At the zero point itself, we should have normal defences and bunkers and BSF jawans posted in full battle gear. If Pakistan wants to continue its 'goosesteps' drill, so be it. We should refuse to be part of it all.

One hopes that this will be a first essential step in our disproportionate attention to our Western neighbour. One understands that Delhi [ Images ] being so close to the border there is the natural inclination to give more attention to Pakistan but must one billion people be held hostage by a bunch of people with a nostalgia for 'Lahori culture'?

May be, just may be, if this small step is taken then the message will go home to all and sundry to stop shooting their mouths on Pakistan. Some time ago, a young general secretary of the Congress had raised this very issue -- why do we pay so much attention to this epicentre of world terror? Well despite my not being a member of Indian International Centre in New Delhi, this sensible suggestion will find takers.
Click to expand...

can some one give the rough figures like how much money is spent on this wagah ceremony daily?
V

It is the theater of the absurd.

Though I think it adds to the tourism potential of the area. So there is some positive at least.

Indian and Pakistani border guards have done away with aggressive gestures during the daily ceremonial "retreat" ceremony on the border at Wagah.

For 45 minutes every day at sunset the guards high-kick, stamp, speed march and bawl their way through a choreographed routine.

It ends in the lowering of both flags and the slamming of the border gates.

The display has become a huge tourist attraction, drawing thousands of spectators every evening.

'Leg injuries'
The border guards in the ceremony, which began in 1959, belong to India's Border Security Force (BSF) and Pakistan Rangers.

Now both sides have decided to water down the belligerent tone after a request by India two months ago, according to a spokesman of Pakistan Rangers.

Nadim Raza told the BBC: "India's BSF had requested the toning down of aggression in the ceremony at Wagah, and started practising it a couple of months ago. We have decided to respond."

"But we will only change the 'fist gesture'. No thumb would be shown and aggressive looks will be replaced with a proper handshake and a smile."

He said the Pakistani guards would "continue with foot-pressing and leg-stretching drill because it is the pride of a soldier and a symbol of his fitness".

A senior BSF officer said India had made several earlier attempts to tone down the "hostility" in the drill but the Pakistan Rangers had refused to alter their routine, too, until recently.

"We have finally agreed to reduce much of the aggressive posturing that had been part of the retreat ceremony up until now," Himmat Singh told the BBC.

India has also deployed women guards to participate in the ceremony.

The retreat has been made a much more cordial affair with the exclusion of key gestures like the dramatically extended arm, the clenched fist with the thumb held skywards.

Some reports say that the Indians decide to tone down the aggressive moves as it was affecting the health of their guards.

But Nadim Raza said that the drill "never causes leg injuries in soldiers".

Peace talks between Delhi and Islamabad froze after the 2008 militant attacks on Mumbai - which Pakistan later admitted were partly planned on its soil. Dialogue has resumed over recent months, although with little progress.

seems India has deployed all women BSF contingent for the daily Wagah ceremony.
BSF women constables take part in the 'Beating the Retreat Ceremony' at Indo-Pak Attari-Wagah border near Amritsar on July 22, 2010. 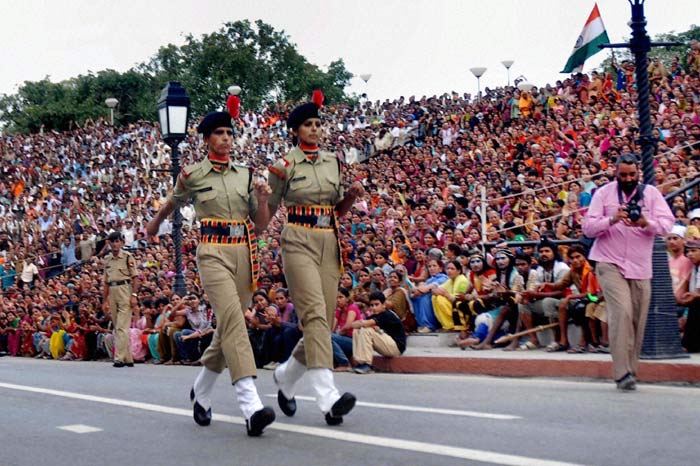 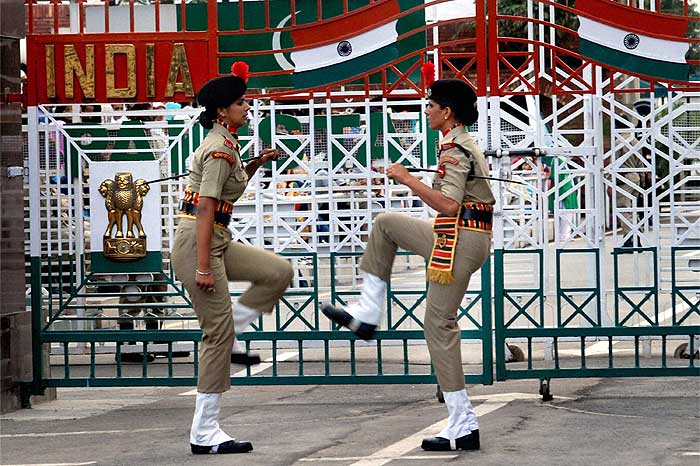 Women guards to take part in Wagah border ceremony
Women guards, for the first time in over four decades of the BSF history, have been made a part of the Beating retreat ceremony at Wagah border.

You must log in or register to reply here.
Similar threads
Everyone please join koo, much better than Twitter
Please do not use DFI as prefix or suffix on other forums
ATTENTION!! - Please be extremely aware and be careful of what you post here.
Please check in .. Desis; Hindus, Sikhs, Jains, Buddhists ,Parsis born in the west
Share:
Facebook Twitter Reddit WhatsApp Link