Pakistani President Asif Ali Zardari has stepped down, leaving his official residence after five years in power overshadowed by worsening security and a weakening economy.

The 58-year-old widower of former prime minister Benazir Bhutto was treated to an honour guard from the armed forces and shook hands with staff before leaving the presidential palace.

Zardari retires six years after his wife's murder, having presided over the only civilian government in Pakistan to complete a full term in office and hand over to another at the ballot box.

Unpopular and always shrouded in controversy, Zardari, once jailed for 11 years for alleged corruption, is now likely to split his time between Pakistan and Dubai.

In an interview broadcast, Zardari said he would not run as prime minister in the future and would instead re-organise the party by shuttling around the country.

Zardari, whose Pakistan People's Party (PPP) suffered a humiliating electoral defeat to the Pakistan Muslim League-N (PML-N) in May, said his party will continue taking the "war for democracy" ahead.

"Our mandate was stolen by the forces which want to destabilise Pakistan," Mr Zardari said.

"We did not lose the war but have taken it ahead for the cause of democracy.

"Now I have to fulfil your responsibilities, now I will meet workers, my sisters and brothers and will reorganise the party all across the country," he said.

Zardari's successor Mamnoon Hussain, a businessman and close ally of Prime Minister Nawaz Sharif, is soon to be sworn in.

Three Cheers for Bugs Bunny for being able to keep the Army and the Judiciary from jailing/ hanging/ nabbing him for FIVE LONG YEARS! 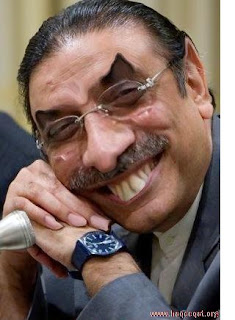 zordari must have fled the country by now....
T