SEOUL (Reuters) - North Korea is to carry out its second rocket launch this year in December as South Korea holds its presidential election in a move that will likely trigger diplomatic tensions between the two Koreas and censure from the United States and Japan.
Click to expand...

Isolated and impoverished North Korea launched its second long- range rocket of 2012 on Wednesday and may have finally succeeded in putting a satellite into space, the stated aim of what critics say is a disguised ballistic missile test.The rocket was launched just before 10 a.m. Korean time (0100 GMT) and overflew the Japanese island of Okinawa. 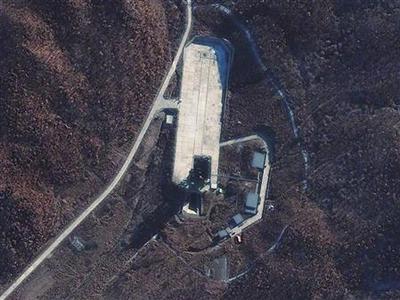 A rocket launch by North Korea in April was aborted after less than two minutes flight. Wednesday's launch came after the North carried out repairs on the rocket, which South Korean officials said had been removed from its gantry on Monday.

Both South Korea and Japan called meetings of their top security councils after the launch and Japan said it could not tolerate the action. Japanese television station NHK said the second stage of the rocket had crashed into seas off the Philippines as planned.

It was not immediately clear if the third stage carrying the satellite had made it into space.

"Whether the satellite launch (orbit) itself succeeds or not, it is a success for North Korea anyway," said Kim Young-soo, a North Korea expert at Sogang University in South Korea.

There was no immediate announcement from North Korea on the launch. It made a formal announcement when the April launch had failed, but has previously claimed that it put a satellite into space in 2009, something no one has been able to verify.

"We will convene an emergency security meeting at 10:30. The launch was made around 9.50 a.m.," an official at South Korea's presidential office in Seoul said.

The North launched the rocket close to the December 17 anniversary of the death of former leader Kim Jong-il last year and as elections loom in South Korea and Japan.

Pyongyang says it is entitled to launch a satellite into space but critics say the rocket development is aimed at nurturing the kind of technology needed to mount a nuclear warhead on a long-range missile.

North Korea is banned from conducting missile and nuclear-related tests under U.N. sanctions imposed after its 2006 and 2009 nuclear tests.

The rocket's path was scheduled to pass between the Korean peninsula and China, with a second stage splashing down off the Philippines before launching the satellite into orbit.

Most political analysts believe the launch is designed to bolster the credentials of new leader Kim Jong-un as he cements his rule over the country of 22 million people.

A government official in Seoul said recently that the transition of power to Kim Jong-un did not appear to be going as smoothly as anticipated and there were signs that the regime was concerned over the possibility of rising dissent.

Kim is the third of his line to rule North Korea, whose national output is around one-fortieth of that of prosperous South Korea.

The North's only major diplomatic ally, China, has expressed "deep concern" over the launch but is thought unlikely to back any further sanctions against its ally.

The Japanese government said Wednesday that a debris of North Korea's long-range rocket fell into waters off the Philippines at 10:05 a.m. after passing over Okinawa.

Pyongyang fired off the rocket at 9:51 a.m., Seoul's defense ministry said earlier in the day. Japan didn't order its military to intercept the North Korean rocket, according to officials.

Shortly after the North's defiant launch, the Japanese government convened an emergency meeting of security-related ministers.