The first ever indigenous Wankel Rotary engine, powering Nishant, the Unmanned Air Vehicle (UAV), took off from a World War II abandoned runway near a village eight kilometres from Kolar in Karnataka. The maiden flight of the indigenous Wankel engine of a UAV, which took off yesterday morning, climbed to an altitude of 1.8 km effortlessly before cruising for 35 minutes.

The air vehicle was recovered safely at the intended place at a dried-up lake after a total flight duration of 40 minutes, a defence press release said here today. The event signifies achievements in many categories: It is the first time that a Wankel engine has been developed within the country and UAV flown with an indigenous engine.

The engine, a Wankel Rotary type, was a developmental project, which originated at the DRDO through VRDE, Ahmednagar, and was jointly designed and developed by NAL, a CSIR laboratory, VRDE, Ahmednagar, and ADE, Bangalore, it said. The Wankel engine is the first of its kind that was totally designed and developed in the country. Very few countries in the world have the capability to develop and master this technology, the release said.

This indigenous engine is expected to replace the present imported engine for Nishant.

The DRDO Nishant is an Unmanned Aerial Vehicle (UAV) developed by India's ADE (Aeronautical Development Establishment) a branch of DRDO for the Indian Armed Forces. The Nishant UAV is primarily tasked with intelligence gathering over enemy territory and also for recce, surveillance, target designation, artillery fire correction, damage assessment, ELINT and SIGINT. The UAV has an Endurance of 4 hrs & 30min. Nishant has completed development Phase and User trials.

The 380 kg Nishant UAV requires rail-launching from a hydro-pneumatic launcher and recovered by a Parachute System. Launches at a velocity of 45 m/s are carried out in 0.6 seconds with 100 kW power and subsequent launches can be carried out in intervals of 20 minutes. The Mobile Hydro-Pneumatic Launcher (MHPL) system mounted on a Tatra truck weighs 14,000 kg and boasts of a life cycle of 1000 launches before requiring overhaul.

Nishant is one of the few UAVs in the world in its weight-class capable of being catapult-launched and recovered by using parachute, thus eliminating the need for a runway as in case of conventional take-off and landing with wheels.

At a world war II abandoned runway in a small village called Veerapura, 8 Kms from Kolar, DRDO conducted first ever flight of an indigenous engine powering Nishant Unmanned Air Vehicle. The engine, a wankel Rotary type was a project originated from VRDE, Ahmednagar, and jointly designed and developed by NAL, a CSIR lab, VRDE, Ahmednagar and ADE, Bangalore.
The flight took off at 1157 hrs in the morning of 31 Mar and climbed to an altitude of 1.8 Kms effortlessly before cruising for a duration of 35 mts. The air vehicle was recovered safely at the intended place in dried up Muduvadi lake after a total flight duration of 40 mts. The event was witnessed by key personnel Shri PS Krishnan, Director ADE, Dr CL Dhamejani,Director VRDE and DR. AR Upadhya, Director NAL, Regional Director RCMA and Regional Director,AQA and other senior officers.

The Wankel engine is first of its kind totally designed and developed in the country. The provisional flight clearance for the first indigenous prototype engine was given by the certifying agency, RCMA in a short ceremony held at the launch pad. The engine was cleared for flight after a rigorous ground and endurance test run.
The engine weighs about 30 Kgs, and is known for its high power to Weight ratio in single rotor category. The engine performed very well in flight meeting all the requirements of the Air Vehicle. This indigenous engine is expected to replace the present imported engine of Nishant. The engine has a power of 55 hp and can also be used for powering smaller air vehicles, automotive, Out Board Motors, and Industrial applications.
It is planned to use this developed technology for future application for the UAV’s under development in ADE, Bangalore.
NISHANT is a reconnaissance UAV which has completed its user trials with Indian Army. DRDO release says that it is on the verge of handing over few of these air vehicles to Indian Army very shortly.

This thing is grossly underpowered and needs to be developed further.....

As name suggest, many people will discount such a Wankel engine, but one should always remind themselves that it is not easier to develop such engine. Just a couple of days before I happens to watch Automobile enigneering related serial on channel Fox History, they describe this engine was first developed in 1914 and still being used in many luxurious and expensive sporty cars. Tech required for it is available with only few countries. This will help us to boost our UAV technology in newer way as it will help to power bigger UAV in future.

Congratulations to all the scientist involved in its development. 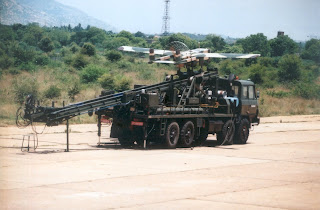 here is a picture of the test

I've been staring at this picture for whole minutes since I got it a while ago. I don't know why this feels like the first ever picture I've seen of the Nishant UAV on a tarmac/bay. The Nishant, of course, doesn't ever need a tarmac -- it is launched using a truck-based mobile hydropneumatic launcher. Did a quick check -- this Nishant was towed down the tarmac for a display, and that's where this photograph was taken. Still, nice.