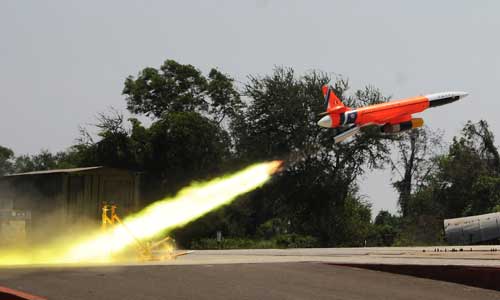 The advanced version of Pilot-less Target Aircraft (PTA), Lakshya-II was test-flown by the Indian Air Force (IAF) from the Integrated Test Range off Odisha coast on Wednesday.

The unmanned aerial vehicle was flight-tested from the launching complex-III of the test range at 4.25 pm and demonstrated its full capability.

Defence sources said the entire flight was pre-programmed and successful. It demonstrated various technologies and sub-systems including software correction.

“In a flight lasting over 30 minutes, it was made to dive at different altitudes. It also maintained required altitude for the specified time before demonstrating auto climb-out,” said an official.

The aircraft also demonstrated its manoeuvring capability simultaneously simulating manoeuvring attacking aircraft. The aircraft has been designed in such a way that two targets can be flown and controlled by a common ground control station.

Lakshya-II has been designed and developed by Bangalore-based Aeronautical Development Establishment (ADE), a premier DRDO lab specialising in UAVs and flight control systems.

The PTA, a sub-sonic and re-usable aerial target system, is remote controlled from the ground and designed to impart training to both air-borne and air-defence pilots.

It is required for evaluation and development trials of new surface-to-air and air-to-air weapon systems. The test was carried out to check the validity of its engine and duration enhancement.

Your views on this

This is nothing new, It existed since a very long time ..

I am assuming the engine is new ..
C