This boy has the spirit hope for best of his future... 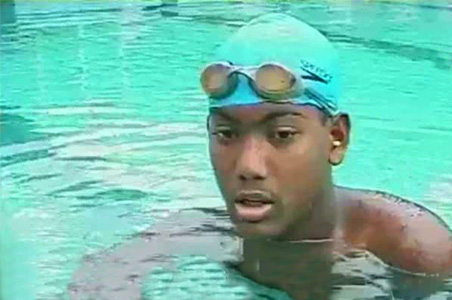 A teenaged tea seller at a roadside shop in Kolkata wants to go to the Olympics, not as a spectator but as a swimmer. And his big dream is to win a gold for India.

Sourav Saha has decided to swim his way to glory. The odds are stacked against him -- he helps his father sell tea at a roadside stall. But he has already won a national gold and is dreaming big.

"To get ahead I have to practice well. Whatever my coaches tell me I have to follow. My dream is to go to the Olympics," Sourav said.

The 14-year-old's family thought swimming was a waste of time, till the medals came pouring in. Now his father and his coach want the government to take over his training.

"I am trying very hard, and sacrificing a lot. I hope to see him succeed one day. He has a dream to go to the Olympics," his father Pinaki Saha.

"We are expecting he will do better. He'll benefit after getting admission at SAI (Sports Authority at India). He'll definitely benefit," Sourav's coach Biswajit de Chowdhury said.

Between selling tea and swimming, Sourav's school attendance is erratic. But he wants to be India's Michael Phelps and is not willing to let his dream die young.