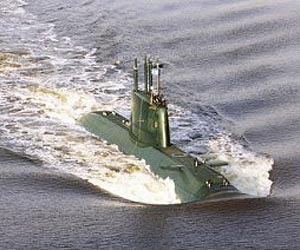 Israel is building up its navy and it's looking to Germany
to provide the warships, most notably two advanced corvettes and two, possibly three, more Dolphin-class attack submarines, that will transform it from a coastal force to a deep-water navy.

Until now, the navy has been largely confined to the Mediterranean countering the naval forces of Syria, Egypt and the Maghreb states further east, with occasional forays into the Red Sea.

The objective of the expansion program clearly seems to be to increase the navy's reach to counter Iran, which Israel views as its primary adversary because of its buildup of ballistic missiles and its alleged drive to develop nuclear weapons.

The main focus of the naval expansion program is negotiations with Germany to buy two MEKO A-100 corvettes from the Blohm+Voss shipyard in Hamburg. Jane's Defense Weekly says the 2,500-ton, 280-foot MEKOs would be adapted to carry Israeli-made systems.

The warships, which carry crews of 94, have a range of 4,635 miles, a top speed of 30 knots and advanced radar-evading capability. They carry one medium-size helicopter and 24 weapons systems -- 16 ship-to-shore and eight anti-ship missile launchers adapted to U.S. weapons as well as air-defense missiles and automatic cannon.

The Israeli navy had shown interest in Lockheed Martin's Littoral Combat Ship to fit its requirement for a new missile ship to be categorized as Saar 5.5. But the U.S. vessel was considered too expensive at $600 million. The MEKO variant sought by Israel costs an estimated $300 million.

The Israelis want a discount on the proposed MEKO deal of 20-30 percent, said Jane's.

The Germans are already funding one-third of the total cost, estimated at $1.4 billion, of two 1,900-ton Dolphin submarines, based on Germany's Type 212A boat currently on order.

These were ordered in 2006 and are scheduled for delivery starting in 2012 to the submarine base at Haifa. That will bolster the Israeli navy's sub strength to five.

The subs, the most expensive weapons platforms in Israel's arsenal, have a range of 2,810 miles. However there were reports in October 2009 that their fuel capacity had been increased to keep the vessels at sea for 50 days without refueling.

German opposition parties, including the Social Democrats, have expressed misgivings about exporting weapons to crisis zones. But the 2006 order for two Dolphins was approved while the Democrats were part of a coalition government.

Germany has provided hefty discounts on arms sales to Israel because it is morally committed to the Jewish state's security in reparation for the Holocaust.

Talks are under way on Israel acquiring a sixth Dolphin built by the Howaldtswerke-Deutsche Werft in Kiel and the Thyssen Nordseewerke in Emden.

Each Dolphin is believed to carry 10 U.S.-built Harpoon missiles but these have a range of only 135 miles. Still, that gives these boats a limited strategic first- or second-strike capability.

With six Dolphins, the Israelis would be able to maintain at least two or three deployed in the Arabian Sea off Iran's southern coast at any one time or at their Red Sea naval base at Eilat on the Gulf of Aqaba ready for swift deployment against the Islamic Republic.

Israel has threatened to launch pre-emptive strikes against Iran's nuclear facilities if it fails to halt its alleged weapons program.

One Israeli source noted that the navy would like even more Dolphins. "Our ideal number would be nine -- enough to ensure we have the necessary assets at sea to cover all relevant threats and targets," he said.