We will stage short-term maneuvers with the Indian army and we are also after holding tactical, extensive, large-scale maneuvers as well as rescue and relief drills with India,” Rear Admiral Habibollah Sayyari told reporters on Thursday.

Sayyari made the remarks after he met with the Indian deputy commander for naval operations and his entourage to discuss cooperation to establish security in north of Indian Ocean.
“The Indian Ocean is of high significance to the world and the Islamic Republic of Iran and its security is very important to us and the globe. Therefore, we have announced that we are capable of ensuring security in the north of the Indian Ocean to prevent any insecurity there,” the admiral said. 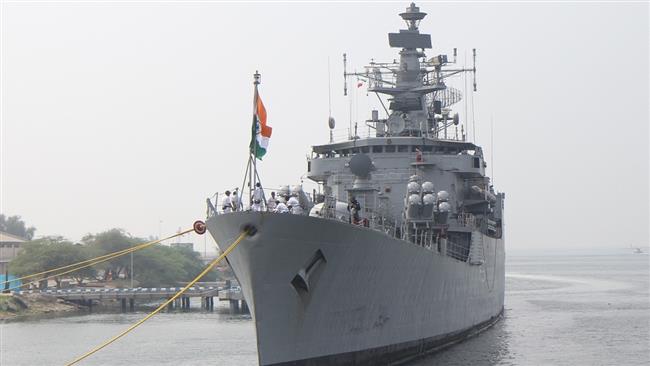 An Indian navy fleet docks at the southern Iranian port city of Bandar Abbas on August 28, 2015
In late January, Iranian Navy's destroyer Alvand set sail to India to participate in joint maneuvers with several other navies. Alvand participated in the naval drills along with other destroyers near Visakhapatnam Port in India. India had organized the drills on the occasion of its national day.
In recent years, Iran has made great achievements in its defense sector and conducted numerous military drills.

Iran has repeatedly assured other countries that its military might poses no threat to other states, insisting that the country’s defense doctrine is entirely based on deterrence.

We should engage Iran in such military drills... Of course it will be little uneasy to our friend Israel. But it will give signal to USA that you can not miss use your diplomacy with India while engaging pakis.... See we are much closer to Iran . But we should convey and address Israel concerns before we do that as a NAM country.
You must log in or register to reply here.
Similar threads
Iran starts navy drills in Strait of Hormuz
Iran navy saves US freighter from pirates: report
US Navy's tiniest ships could lead assault on Iran
US navy head: Iran strait 'keeps me awake at night'
Share:
Facebook Twitter Reddit WhatsApp Link